The Art of Alice: Madness Return

We all know of the fantastical world of Wonderland but what happens to it when Alice gets older?

Alice: Madness Returns is the sequel to American McGee’s Alice which takes place after the events of Louis Carroll’s Through the Looking Glass. In this game, when Alice gets older, her house burns down in a fire. Although she was able to escape, her parents and sister were not as fortunate. Her physical wounds were treated but her mental wounds failed to do the same. Dr. Bumby, a child psychiatrist, tries to use her Wonderland as a tool to help her forget her past but she keeps repeating the night in her mind over and over again, and ultimately blames herself for their deaths. As her mind is in shambles, so is her Wonderland. 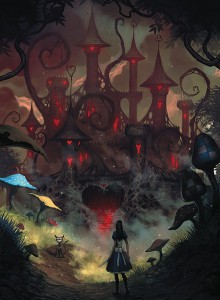 The style was very unique as it combined the childish, playful, and magical themes from the original Wonderland and the destructive and dark elements derived from Alice’s twisted mind. Given the setting, the design team had limitless possibilities. There were no limitations to the designs as there was no need to recreate the real world. This freedom of design led to indecisiveness which resulted in a large amount of unused concept art, compiled into a beautiful art book. The style of the environment and characters were done to recreate miniature painted models while the cutscenes were done in two-dimensional paper cut-outs. 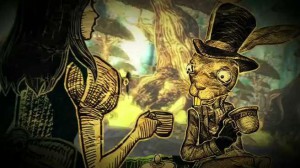 There are important characters and motifs for the team to work with but adding their own own interpretation and style. Some characters include Alice, Cheshire, Mad Hatter, Caterpillar, Tweedledum and Tweedledee and the Red Queen.

Besides the reinterpretations of the characters, locations are also redesigned.
The first area of Wonderland Alice falls into is called Vale of Tears. The place is reminiscent of the Wonderland we all know and love, filled with over-sized and vibrantly coloured flowers, mushrooms, childhood toys, and magical creatures. All seems to be normal but as Alice progresses further into the forest, things aren’t quite the same. The rivers fill with blood, the forest collapses, and volcanoes erupt. Soon the place is filled with hostile creatures waiting to feast on Alice. She must defeat the wicked monsters and travel through different domains to catch the infernal train, representing Alice’s insanity, which is corrupting her Wonderland. 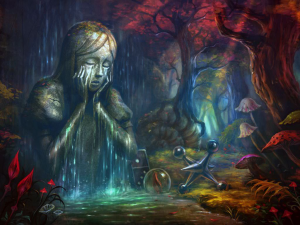 Other areas Alice ventures through are Hatter’s Domain, Deluded Depths, The Oriental Grove, Queensland, and the Dollhouse.

Hatter’s Domain, is home to the Mad Hatter. This area is done in a steampunk style and is filled with motifs of teacups and teapots. Enemies include mechanical tea-pot bombers and little goblins who use teacups as helmets, plates as shields, and forks as weapons. 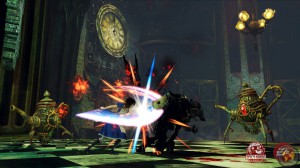 Deluded Depths, is an underwater world filled with magical sea creatures, guided by Mock Turtle. The area is decorated with pirate motifs. Enemies include oversized sea creatures and ghosts of sailors lost at sea. 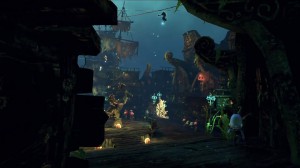 The next domain is Oriental Grove, home to the wise Caterpillar, who is now in a cocoon. The area is filled with motifs from asian cultures such as mahjong pieces, cherry blossoms, statues, lanterns, etc. The civilians that reside there are origami ants and the enemies include different kinds of samurai wasps. 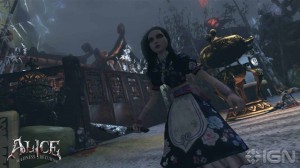 The following area is Queensland, home to the Red Queen. The area is decorated with dark Victorian embellishments and contains motifs of playing cards, red roses, and gardens. The enemies are card guards. 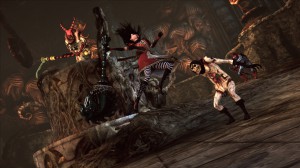 The last area is the Dollhouse, which is the prison created by the Dollmaker, a new character not from the original Carroll’s books. As the name suggests, this domain is filled with dollhouses styled architecture and furniture. Enemies in this domain are deadly dolls. 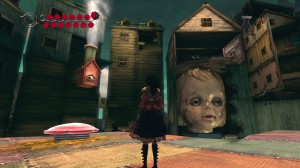 Alice: Madness Returns certainly opened up the limitations of art and design in the context of video games.

1 Response to The Art of Alice: Madness Return