The Bomber’s Notebook – a close reading of Majora’s Mask 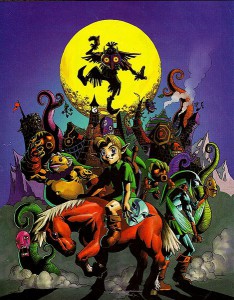 In my experience, The Legend of Zelda: Majora’s Mask, the second instalment of the popular Zelda franchise on the N64, has been widely underrated. It received a large amount of amateur criticism from the gaming community due to the large differences in style from its predecessor, Ocarina of Time, which tends to steal most of the glory. However, the bizarre and deeply unsettling tale of a demonic masked child that threatens to pull the moon from the sky has many remarkably interesting elements. In particular, the way it makes use of a seemingly trifling sidequest; completing the Bomber’s Notebook.

Towards the beginning of the game, the player is given the option to join a schoolyard gang. However they are not a gang of bullies. “The Bombers” are a group of five kids who dedicate their time to helping others. When Link (the player’s controlled character,) joins the gang, he is given a sticker-book called the Bomber’s Notebook. The player’s job is to find 20 people who are unhappy, and do whatever they can to make them happier.

One reason this sidequest begins at the very start of the game, is that it is an immensely time consuming one, and it takes nearly the whole length of the game to complete. The tasks required to complete it include saving a milk delivery truck from bandits, helping the regretful spirit of a dancer find peace, and reuniting the innkeeper with her long lost fiancée. The latter can’t be completed until the very end of the game, and has gained notoriety among some fans as the most difficult sidequest in Zelda history.

A criticism I hear over and over about this game is that it only has 4 dungeons. Ocarina of time had about 9, depending on whether you count the final dungeon. If it weren’t for the Bomber’s Notebook, this game would be exceedingly short. However, many players tend to forget about it, and so their gameplay experience isn’t nearly as enriched as it could be. The number 4 is a recurring theme in the game, and so it was clearly the intent of the developers to include this time consuming sidequest to lengthen an otherwise short adventure. 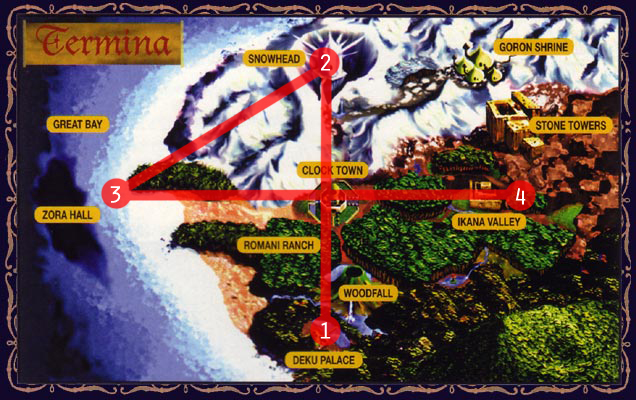 This is the order in which you visit the four areas of Termina. Coincidence? Maybe…

However, this is far from what I believe its true purpose to be. I’ll remind you that Link is given the book in order to help people become happier. This is where I believe the essence of the game lies

When Link arrives in Termina, he finds a world that is lost and sad. Everywhere, dark curses have spread like plagues, and the people are confused, lonely, and losing hope. It is emphasized in the music and visuals. The environments are dark and dreary. The music is as melancholy as music gets. In the Ikana Valley, which I regret I have little room to elaborate on, it can get downright horrific.

Everywhere Link goes, he defeats the evil curse and restores peace, but it doesn’t make the people happy. What I find so interesting is that the game causes you to make personal relationships with the characters to find out what is troubling them. Most adventure games do not do this. In many games, it seems as if defeating the dark lord will magically solve everyone’s problems. Nobody will ever be sad again. However, this is not true. Adding this element of realism is what makes this game stand out.

Now maybe that makes the game a bit too tedious. Perhaps so, but again, this sidequest is optional, so players can skip right past it if they choose. And many do, and ergo many miss the point.

What is the point then, you may ask? The Bomber’s Notebook has a connection to our own lives. The game is trying to teach us a lesson. (What? Games can have morals?)

Overcoming unhappiness in our lives isn’t about defeating some great evil that’s keeping us down. Sometime’s we’re unhappy, and yes, it is directly someone’s fault, but you don’t just go and kill them. There is no magical solution that makes us truly happy. Just like there is no magical solution for the people of Termina. You have to go down to the small details. You have to look hard, and find out what the real problem is, take things in small steps. This isn’t just about helping yourself, it’s about helping others. Sometimes you have to go to great lengths to make the people in your life happier, but sometimes all you have to do is listen to their woes. It’s a very uplifting message, I think.

At the end of the game, you find yourself inside the Moon, which appears to be a strangely peaceful meadow. If you have collected all 20 obtainable masks during the game, (which can only be done if you complete the Notebook) you can try to make it through a series of small dungeons before you face the final boss. When you complete each of the 4 dungeons, you are forced to give your masks to a group of strange, ghostly children, who will vanish after you do so. They ask you some strange things before they disappear. 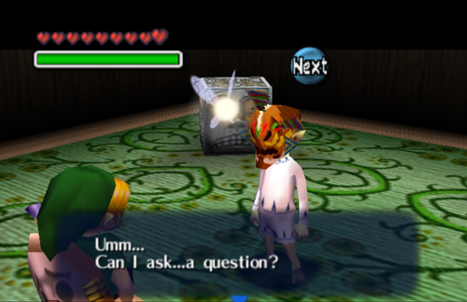 I know I wouldn’t let him ask me a question…

If you push past how incredibly creepy the scene is, you’ll notice the child is not asking Link, but asking you, the player. The other children ask similar questions, and they do merit some serious pondering.

If you were paying attention as you played up to this point, maybe you’ll have an answer.

I should note that upon completing the Bomber’s Notebook, you receive no items, you receive no special messages, nor do you unlock any bonus content. You are simply rewarded with the satisfaction of having done some good deeds. I’ll be honest, I hadn’t even noticed until I started writing this. 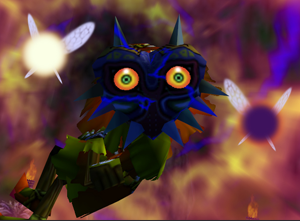