Directed by Japanese filmmaker Hirokazu Koreeda, Shoplifters takes place in Tokyo and depicts the lives of a group of people entrenched in poverty. Families are neither monolithic nor closed but are intricately intertwined with broader social support networks. (Abebe)The families in the movie are the ones that come together for various reasons and gain the warmth of family from each other.

Osamu Shibata and his wife Nobuyo live in central Tokyo with their son Shota, Nobuyo’s sister Aki and Osamu’s mother, Hatsue. In addition to Osamu and Nobuyo’s salaries, this family relies on Hatsue’s pension and Osamu and Shota’s shoplifting to make ends meet. They are not related by blood and have come together for various reasons to form a family. Although these five people live at the bottom of the social ladder, they always have a smile on their faces. One day, Osamu brought back Yuri, who had been abused by her parents, and Yuri joined their poor family. This blog post will discuss and explore the composition of this fictional family, the effects of fictional kinship on family members, and the effects of intergenerational trauma from the perspective of this particular family member, Yuri. 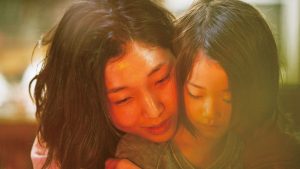 Yuri was the last member to join the family, and one winter day Osamu and Shota found a little girl shivering in the balcony-like hallway on the first floor of their neighborhood, and they took her home to have a meal without anyone seeing them. After dinner, Osamu and his wife Nobuyo take Yuri home. They hear the sound of Yuri’s parents arguing and fighting from inside the house. Nobuyo decides to let Yuri join their family. After seeing a TV report on the search for a missing child, the family cuts Yuri’s hair and names her Rin to delay her discovery and decide to make Rin Shota’s sister.

Yuri enters the small world of a family of five as a stranger, and her presence upsets the original balance, more or less, making everyone think more about the life they are used to, and even wonder about it. This is particularly evident in the case of brother Shota. There is a part of the movie： Osamu, after recovery, goes shoplifting with Shota and Yuri without returning to work. Previously his father Osamu had told him that the products in this store had no owner, so he could take everything. After discovering the theft, the shopkeeper, instead of choosing to call the police, gave Shota two ice creams and told him not to let his sister do it again. Since then， Shota has realized that he doesn’t want his sister Yuri to continue doing what he realizes is problematic. He did not admit in front of his family the fact that he already felt that Yuri was his sister， but he still bought Yuri’s favorite gluten and share it with her. Children see individuals who understand and show emotional care and concern as family. Whether they are related by blood or simply living together, the children build their family through the concept of closeness. (Kassa）Although they are not like a normal family, it is clear that Shota begins to enjoy the closeness, so much so that he soon accepts Yuri and recognizes her as his true sister.

In this movie, Yuri is brought home by Osamu and Nobuyo for a span of six months. During the six months Yuri spent with the Shibata family, Yuri did not once think of returning to her biological parents. Yuri’s original parents physically and emotionally neglected and abused the child, failing to provide adequate attachment and protection, resulting in negative images of self-blame, feelings of worthlessness, and a significant weakening of parent-child attachment. Family interdependence is essential, and failure to meet child or adult expectations may weaken family relationships. (Kassa）After Yuri wets the bed on her first day in a new family, her mouth will be full of apologies. When wearing a nice dress, Yuri is afraid to say that she wants the dress. This is all the shadow brought by her original family. The presence of her new family helped her to make up for the lack of affection.As her new family gives Yuri enough attachment and protection, Yuri’s connection to the family begins to grow close and she becomes dependent on the members of the family.When Yuri blames herself, Nobuyo tells her that she doesn’t need to apologize, Aki encourages Yuri to speak her mind, and so on. When Yuri has emotional needs, the family is there to comfort her and respect her choices and decisions. 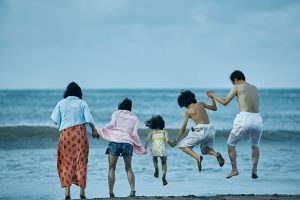 This fictional family has no money tied to it, only loving interaction and spiritual support. This loving influence gradually heals the young girl Yuri, whose growth is also seen in the film, where she makes her debut as a thin, scarred body, barely speaking when brought back by Osamu. A parent’s reaction to a sexually abused child, coupled with guilt and their own history of trauma, can promote dissociative coping in children, causing them to have difficulty dealing with their own real anger, fears, and sense of responsibility. (Silberg) In the process of living with her new family, Yuri comes out of the trauma her family of origin brought her and has a smile again. Yuri begins to see them as her family. Children are valued for their socioeconomic role and are expected to maintain reciprocal relationships within the family they also feel obligated to contribute to the welfare of adults.(Abebe)Later in the film, Yuri will sit quietly on the porch waiting for her brother Shota to come home. When asked by her mother Nobuyo if she wanted to burn the old clothes she wore when she arrived, Yuri would nod firmly. At the end of the movie, when Osamu and Nobuyo are arrested, Yuri will remember the instructions and decisively tell the officer that there are only five people going to the beach. These cinematic scenes represent the fact that Yuri has identified herself as part of this fictional family. The care she received from this fictional family made her think it was a real family. Even though they are not related to each other by blood.

At the end of the movie, Yuri is sent back to her biological parents. This fictional family helps Yuri heal from the pain of her family of origin. Through the film, the audience can see the growth of this little girl. She is no longer as timid and afraid to express her thoughts as she once was. She often sings the nursery rhymes Shibata taught her and stops apologizing to herself after being accused by her mother. This movie is not a compilation of straightforward tragedies that will bring tears to the audience’s eyes. Instead, it depicts a family that is not related by blood but still warms each other.

“Limits and Love: How ‘Shoplifters’ and ‘It Comes’ Confront Parenthood.” Filmed in Ether, 6 May 2019, https://www.filmedinether.com/features/shoplifters-it-comes-parenthood-limits-love-essay/.