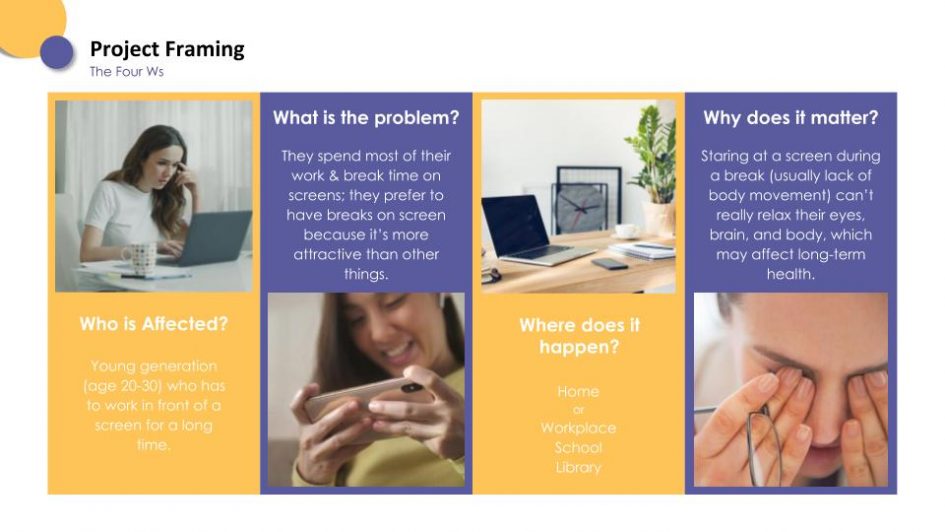 From last week’s S.T.E.E.P.V. analysis, I come up with a great design opportunity that contains three sub-points:

I really like all three points but feeling like there is confusion if I put them together in one project framing – it looks like I’m framing two very similar, but different problems.

I asked Reza in the “One to One” section and got very useful feedback: “Don’t judge anything at this stage.” I agree with him that it’s normal to have uncertainty at this stage of a project; and having too many concerns might limit my imagination. After talking to Reza, I decided to keep all three sub-points…… but still find it hard to put them all together in one sentence.😂

So I asked my friends – surprisingly they all think the first sub-point doesn’t make sense: when to take breaks during work is more like a personal choice and habit. Some people have better concentration so that they may take breaks less frequently than people with weaker concentration; thus, there is no point to remind users when they should take a break. Then I decided to frame the problem based on the last two sub-points.

After cleared my confusion, I framed the problem using the 4Ws technique, which I found suuuuuper helpful!!!!! My mind became very clear after I answer these questions.

One thing to mention is that after reading the weekly reader, I think I don’t need to just design for work from home, but work from everywhere. So I set the “Where” as home, workplace, school, and library etc. 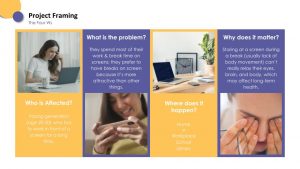 After these 4 W questions, it is very easy to put them into one sentence. Here is how I framed the problem: 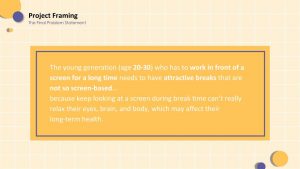