The concept behind my reflection was to attack a blank piece of lumber with an angle grinder and carve into something pleasant. One of the things that stood out to me the most during my time in El Cocal was that such a community could thrive and evolve without a plan or government. I wanted to reflect that in my piece, to go into it blind, and hope for the best. It was a departure from the normal heavy planning, research and thought behind most design projects. After all research and planning is basically what design is. But the lack of specification and detail let me think about other things while I was working.

I went to my family’s cabin, which is itself on a small island separated from society by a very small water crossing, because I think the parallels and contrasts between the two environments made for some good contrasting and reminiscing. While I worked, I tried to think about how lucky I am to have the cabin and the space, the luxury of time to be able to experiment with art and design. I thought about the differences between the two communities, mine has less than 15 full year residents, the other 1500+. Both are roughly the same size. The waste system on Simcoe island works because everyone has a car, they have to, and can easily drive their waste to a neighboring island with a municipal waste processing/ recycling site. It works because of the low yet wealthy population. The crossing is municipally funded and free for residents. All this made me feel pretty lucky too.

I carved the piece out of local pine, an offcut from the main column that holds my cabin up. I used only an angle grinder, as I had seen them in use in Cocal, and I wanted to keep things simple. The form is not nearly as symbolic to me as the process behind it. Taking time to think about my experiences and my time in Costa Rica, while keeping my hands busy creating something interesting (hopefully). There is still a lot of detail carving, sanding and finishing to do, but the main form is there, and I’m glad I got to spend the time working on it in the way I did. 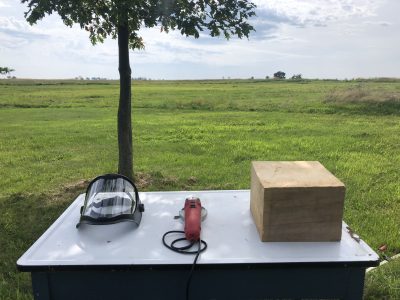 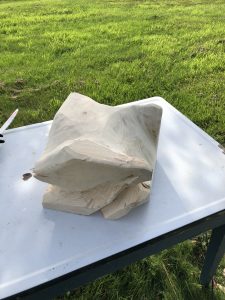 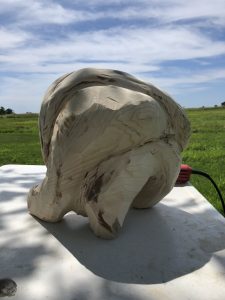 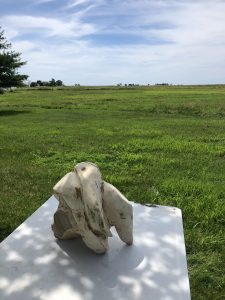