Hi, I am Arielle Bourret-Klein My major is sculpture and installation with a minor in integrated media. I am extremely excited and looking forward to the experience and the new knowledge I will be learning in India. I love being part of a community and being invited to be part of another is a great honour. My work usually involves sculpture or installation pieces that provokes a person's specific emotion or a study on how different situations effects a person's reaction. I hope this trip will open new possibilities to my practice by learning how to think as a designer and by learning from the culture.

For my final design piece I really wanted to bring a piece of India back home, to our Western society.  My art practice usually consists of sculptures or installations that evoke a specific emotion based on the interactions and environment of the viewer.  In my interactive installations I focus on different variables of an interactive piece that would alter or change a person’s emotion or perception of their environment.  For this piece, instead of changing a person’s perception of the environment they are situated in, currently, I decided to bring back the atmosphere of India for the viewers to experience.

In India we had the opportunity to help others and teach them our “Western,” values. However, what I did not expect was to learn from them as well.  I not only learned their values and culture, I also learned to appreciate the little moments and things that filled their lives with happiness.  I learned that it was not the big things that brought them happiness in life, but rather the small every day moments that they were able to take advantage of. A specific example is a simple game called Carrom that our group was taught by a group of orphans from Kesbo.  In my interactive installation the viewers are able to experience a part of the Indian culture hands on by immersing themselves in a game that brings everyone together.  This reflects the Indian sense of community, which is constantly celebrated amongst the citizens and which we learned to appreciate as well.  A huge aspect that I found in India was that they have an immense sense of community, which I find is not displayed as much in our western society.  I really wanted to create an installation that not only immerses the viewers in an Indian environment but also teaches them the ethics portrayed by the Indian culture.  By having a game that encourages all viewers to play together, it creates a sense of community.

My installation consists of the Carrom board game, a game manual and video clips and max software.  While the viewers are playing the game of Carrom, every time a player pockets a Carrom piece a video will start playing on the screen next to them.  Each time a player scores a different video clip will appear showing each time a glimpse of India.  These video clips show India’s scenery, citizens and interesting facts that we learned and experienced throughout the course.  This is done by using max software programming by installing a sensor at each corner of the Carrom board.  Each time a player pockets a Carrom piece the sensor senses the movement and light and sends a start signal to a computer, which will then play a video clip on a screen.

This link will direct you to my final video pieces :http://s1361.photobucket.com/user/DesignAbroadIndia/library/final%20project%20videos?sort=3&page=1

This trip gave me an experience that I could have never imagined.  It exceeded all my expectations and gave me a whole new outlook to the world itself and most importantly a whole new perspective to the different kinds of people that you can encounter with an open mind.  For me India was an eye-opening place to experience that I was missing in my life to further grow as a person and as well grow in my art practice.

Coming back to Toronto I could not stop thinking about the array of different contrasts we have as a Western society compared to India.  The biggest comparison I encountered was the different natures of people that exist in the world.  I am not talking about race but rather depicting the way we present ourselves towards others.  Since coming back from India I could not stop thinking of Toronto as a “grey” and “blue” place while my eyes were still not adjusted from India’s “gold” and “orange” tones.  These colours however can describe the two different places accurately in my eyes.  Toronto being described as grey and blue portrays our sinister and conceded citizens while gold and orange can describe the warm open hearts and bright smiles the citizens of India have.  Of course I cannot draw such drastic conclusions from the kind of people there is however with the factor in mind that even though we were travellers and interesting for them to encounter, they were still sincere when we were greeted warmly.  From observing Indian citizens interactions, it is clear that the people are down to earth and knew what was important in life and was not.  Indians had an outlook in life that put people’s well-being first and materialistic objects second.  I find in our Western culture we lack the integrity to distinguish between what is important and what is not which leads us with an attitude towards life that is not “down to earth” but rather a perception of arrogance.  I found coming back to Toronto I had a difficult time adjusting to the ways we interact with others.  I was still greeting people with smiles or a nod but of course here in Toronto, I would get confused or sinister looks in return.  Our Western society is a place for individualism and lacks the realization that we are all here together in this world.  In India, not once did I not feel at home and it was because of the strong sense of community I felt anywhere in India I visited.  India cherishes the people the citizens are surrounded by and I hope with my experience I can bring that to our society.

I thought I would come back with a new outlook in my practice as becoming a bit of designer but what I learned was even greater than a few techniques to improve my art with the eyes of a designer.  I came back with a feeling of such accomplishment because I realized that the design and art I helped create was not one for myself but for one who needed it more.  As a sculptor, I realized my art I created was just for own self.  After my experience in India, I was never more proud as an artist of the work my group accomplished and I realized it was because for once it was not for my “Westernized conceded self” but rather for someone that needed the beauty of art in their life more than I did.  This was because at the end of the trip I learned to look through the eyes of an Indian citizen with their morals and judgment.  Coming back to Toronto I am excited to start creating art for others to improve their well being than just my own.

With all the hectic activities this weekend in Japur and Delhi from riding elephants, a crazy bus driver, wrong hotels, amazing dancers with a billion pots on her head, good food, weird tour guides, people trying to rip us off, interesting airline names, lots of shopping and almost missing the one and only thing we wanted to see: the Taj Mahal we were still able to have a great time and with a “cherry on top”, got to meet Jon Hamm. 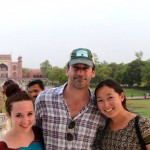 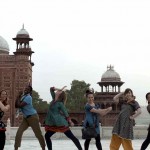 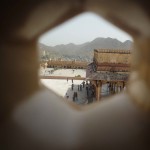 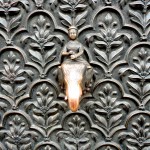 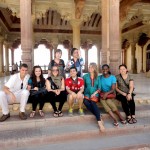 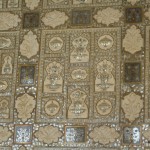 This video clip portrayed a significant moment to the start of my trip.  On our ride to Malavli I was observing the local area’s of Mumbai outside and decided to capture these moments by recording videos.  Seeing the run down buildings, the litter piled everywhere and people sleeping on the ground various thoughts were going through my head: India is a dirty and unpleasant place. Not to mention before this trip many people told me that India was not clean and not an ideal place to visit however, all of a sudden while I was looking out my window a beautiful bird flew by as I was recording a section of the city.  From that instant, that one bird that gracefully flew next to me changed my first impressions and my perspective of India. I then realized that India was not an unpleasant place but rather a completely different culture with many unique kinds of beauty that we don’t typically witness. With an open mind, we can capture new perspectives that are unparalleled to what we witness in western culture.