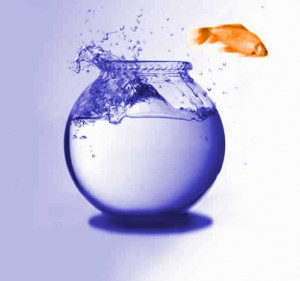 Way back when I was a disaffected yet somewhat motivated high school school student, I did some sort of computerized test (yes, they had computers back then – but they were Big and Mysterious) to determine my career path. I gave The Computer a few bits of information about myself and, when it asked how many years of post-secondary education I might be willing to undertake to reach my goals, I thought three sounded like a reasonable number. The Computer produced its recommendation: dental hygienist.

Now, I have the greatest respect for my dental hygienist but anyone who knows me will probably laugh at The Computer’s advice. It produced this result, I understand in retrospect, not because I indicated any interest in operating delicate yet life-threatening tools, or expressed any commitment to the war on plaque, but because it was one of the few careers you could aspire to at the time that required three years of post-secondary education. Not two. Not four. But three. You see, I had no idea that a typical degree took four years to complete and that, had I entered the number four, I might have been given the option of becoming an Associate Vice-President 😉  In fact, I didn’t know what the term bachelor’s degree meant, nor did I really know the difference between college and university. (An aside: when I finally got to university, I found the term “graduate student” even more perplexing. Isn’t that an oxymoron? If they’ve graduated, why are they still students? Someone should tell those poor suckers they’re allowed to leave now.)

Perhaps this is a bit of an overshare. But my point is to illustrate some of the challenges faced by those of us who did not have parents or other family members to guide and nurture us through to university, let alone expect us to attend. My father had dropped out of formal education in grade 8; my mother finished a high school vocational program. They were (and still are!) great parents. But post-secondary education was a complete mystery to them. Not every so called “First Generation” student is as dim-witted as I was, but most have a similar fish-out-of-water story — a sense that there’s a language you’re not quite fluent in, a code you weren’t privy to,  and that, at any moment, you might be “found out” and asked to leave.

After decades of first generation students avoiding university because of these mysterious attitudinal (often, I would argue, self-imposed) barriers, governments are now recognizing that parental education is hugely important predictor of whether a young person will pursue undergraduate education or not. And thanks to some generous funding by the Ontario government, here at OCAD University, we’re providing programming specifically for those who are the first in the family to attend university.

Last week, we ran a special two-day transition program designed to meet the special needs of first gen students. The Compass Program gave participants a head start on some of the academic skills required for success but, more than that, it helped demystify the university experience; it broke the code, so-to-speak.

There is still so much more work to be done to help first generation learners reach their goals.

Statistics Canada recently released an analysis of how much has changed since 1986 (coincidentally, the year I started university). It’s actually pretty complicated to track because, of course, participation in higher education in Canada is growing overall. But the good news is the gap is narrowing:

In 1986, only 12% of Canadian-born people aged 25 to 39 whose parents did not complete university held a degree. By 2009, the proportion had almost doubled, and nearly one quarter (23%) of the people in such a situation were university graduates.

But those with educated parents are still more than two times as likely to pursue higher education themselves. And much of the positive change is due to the increasing participation of women. Among young men, very little has changed.

The reasons why parental education has such a strong influence are myriad and complex. Certainly finances play a role. A recent study out of the Higher Education Quality Council of Ontario looked at the issue of financial literacy among low income families and determined that:

First, the cost of a postsecondary education is vastly overestimated by the public at large and by low-income youth in particular. In contrast, the economic benefits to attending university are generally underestimated (equally for low- and high-income households).

Obviously, I’m pretty passionate about this issue, based in part, admittedly, on my personal experience. And so when I came to OCAD University some eight months ago, I was delighted to discover that my colleagues are equally dedicated to access, support and success of first generation students. Our Admissions & Recruitment department conducts outreach into non-traditional markets, targeting students who might not see themselves as university students.  Our Financial Aid & Awards office has a thriving Financial Literacy program that helps students understand their relationship to money — especially important in the context of art and design. And of course our First Generation Student Success program helps put all the pieces together to ensure that these fish-out-of-water find a sense of community and belonging at OCAD U. Thanks to everyone who helped make it a success!

Do sports matter at an art + design school?

Our global reach: Thoughts on the next stages of internationalization at OCAD U 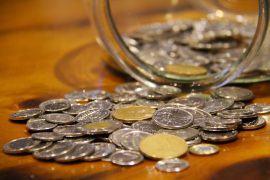 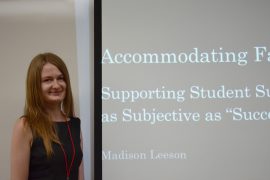 Student Success Conference: But where were the students?

Remember when we introduced you to Madison Leeson, a newly minted graduate of our Criticism & Curatorial Practice program? Well, she’s back from delivering her…