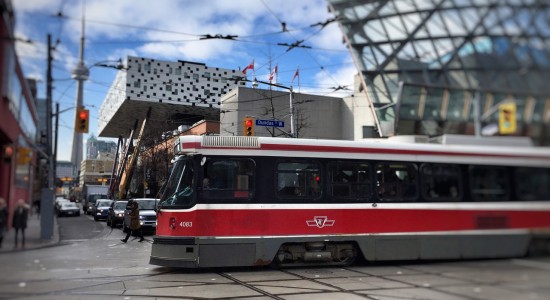 In the fall of 2015, Toronto’s four universities — OCAD U, Ryerson, York U and UofT — collaborated on a massive data collection effort called StudentMoveTO. The goal was to collect detailed data about where students live and travel throughout the day, as well as what factors influence how they schedule work, studies and daily activities.

The macro findings? One third of Toronto’s 184,000 university students are spending two hours or more travelling to and from campus on school days, and one-quarter of them live at least 20 kilometres away from their destination. This has a massive impact on decision-making around which courses to take when, and how universities are scheduling them.

While this is no surprise to many of you, it’s the first time we’ve had real, evidence-based data we can sink our teeth into on how your commute impacts your student experience. And while the StudentMoveTO report isn’t a policy document, it’s a powerful tool for benchmarking each of the universities’ efforts to make improvements to your experience, and for policy makers and urban planners to help shape regional transportation.

“The data is incredibly rich and we’re still examining it to understand in detail not only transportation patterns, but other factors affecting students’ lives and their educational experiences,” said Design Professor Isabel Meirelles, OCAD U’s faculty representative in the research team, which included Professors Matti Siemiatycki at UofT, Roger Keil at York U, Raktim Mitra at Ryerson, and doctoral candidate Chris Harding at UofT. “Our next steps involve continuing to delve into the data and devising visualization methods that will help viewers gain further insight.”

Let’s dig into some of the findings, and have a look at how OCAD U compares to the average for all four campuses.

Shown in the figure above, travel times and use of different modes varies from campus to campus. OCAD U respondents walk and cycle to school at very high rates, but they are also heavily reliant on regional transit – a reflection of the range of locations where their students live within the region (see below). 36% of all OCAD U students spend 2 hours or more per day traveling to and from campus. 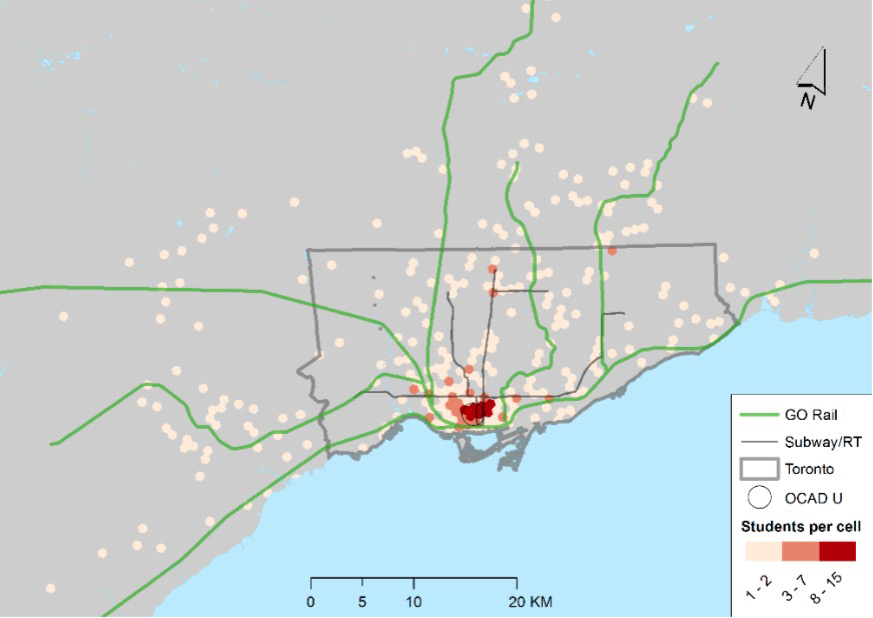 We’ve learned that the highest concentration of OCAD U students is found near campus, with most students further away located near transit lines, and OCAD U students have the greatest average distance to campus, at 22 km, with 21.5% of OCAD U respondents living 25 km or more from school. This may be due to the highly specialized nature of the university.

OCAD U students are actually the most price sensitive of any university. Aside from students who did not have a say in their household’s most recent move (those living at home in large part), the ability to walk or cycle was overwhelmingly chosen as next most important factor, this despite the fact that combined Walk and Bike rates at OCAD U are 13% lower than those of UofT’s St George campus just a short distance away. Proximity to transit follows, which makes sense given the high combined local and regional transit share. Despite long distances to campus, Drive-alone and Ridesharing are lower at OCAD U than anywhere else. 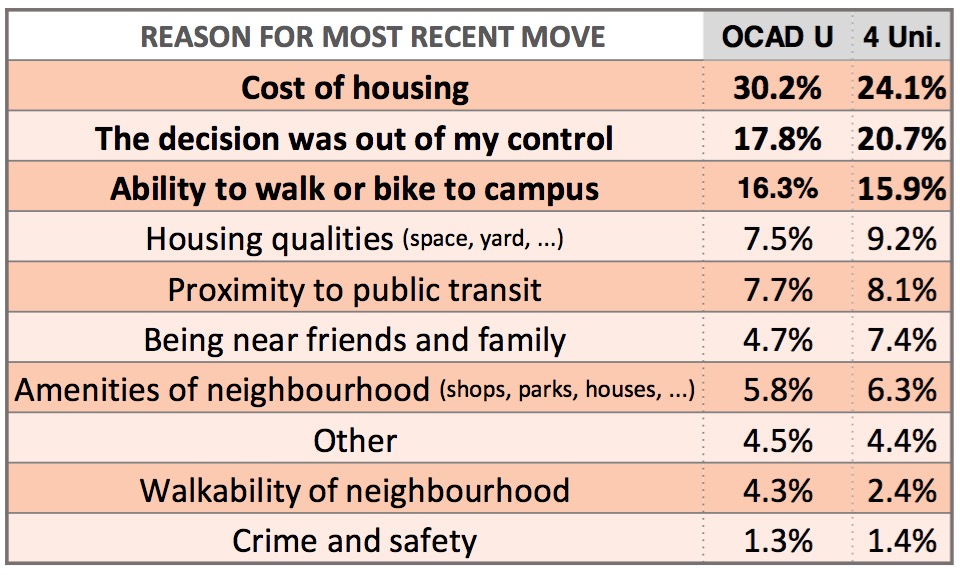 Commute distance has a strong influence on whether or not students come to school. Likewise, as travel time from home to school increases, so does the likelihood that a student picks their courses based on their commute – this ranges from a low of 28% to a high over 80% for those commuting over 70 minutes or more each way. Students may be grouping courses together or avoiding early mornings and late nights, behaviours that reduce the burden of travel, but aren’t ideal from an academic perspective. 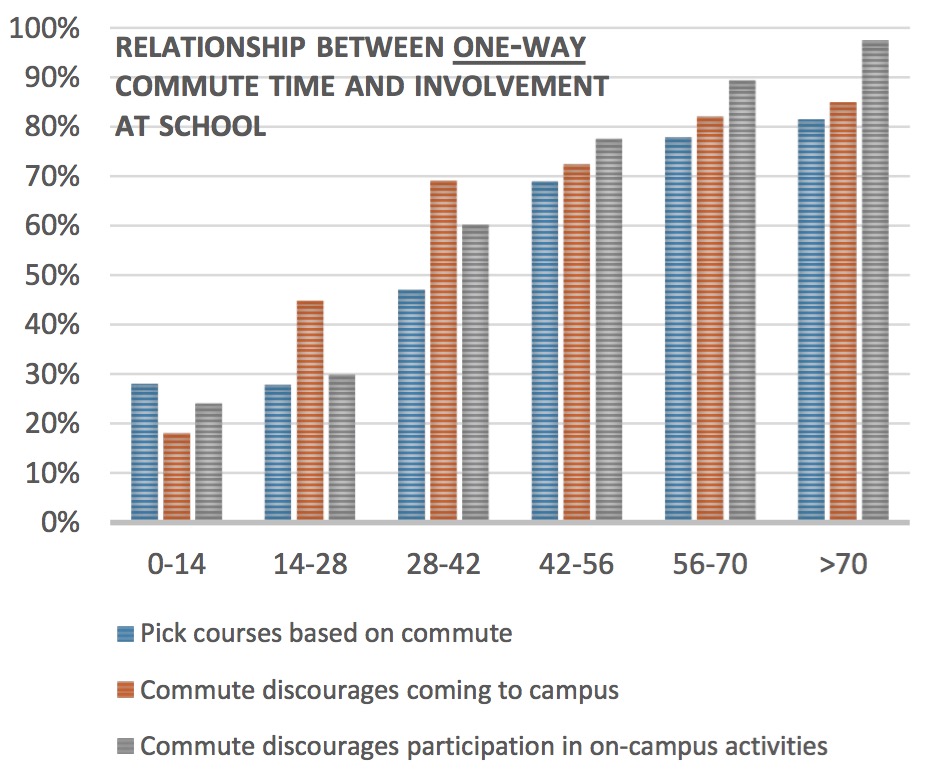 Students also have a life outside of school and often have to work in order to pay for university. Over 60% of OCAD U students work, 13.5% of which work more than 20 hours a week. Data gathered using StudentMoveTO’s online travel diary will enables us to look more closely at how work trips fit in with the rest of students’ lives, and better understand the challenges faced when balancing school and other responsibilities. 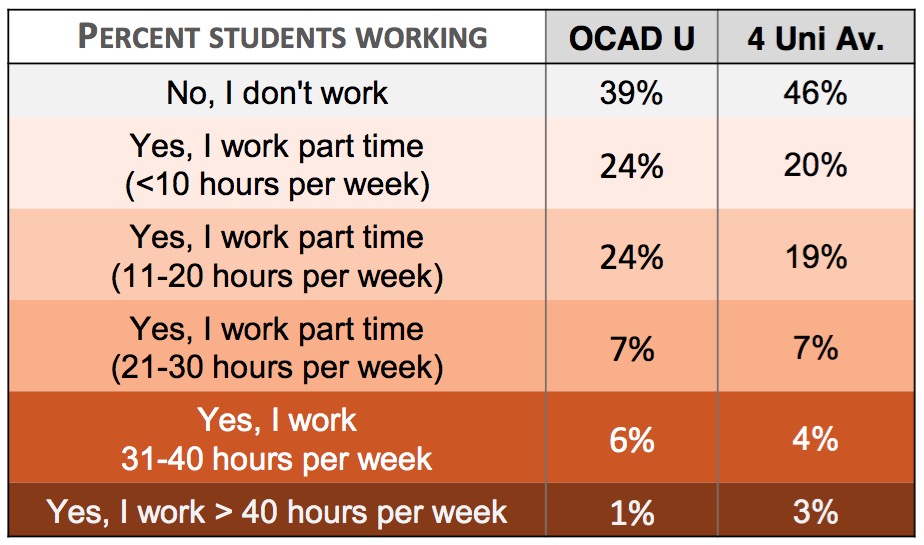 We asked students what could motivate them to change their main mode of transportation to campus. A few takeaways: 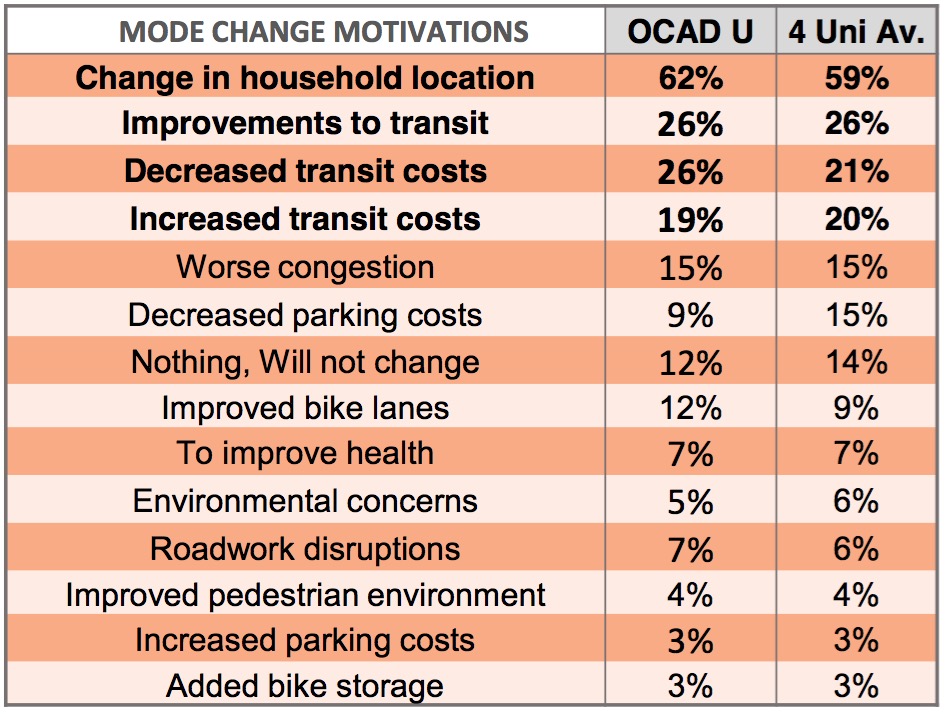 What motivates students to change their mode of commute

While more detailed analysis is required before any policy can be drafted to improve the sustainability of travel to campus or decrease the effect of long commutes on university participation, StudentMoveTO data clearly shows promise in helping to better understand, and then tackle these and other issues in a targeted and evidence-based manner.

How GradEx opens the door to your career 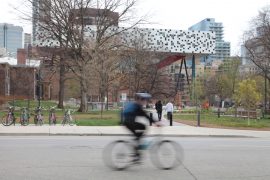 Throughout October and early November, OCAD U is participating in the StudentMoveTO survey, along with many other colleges and universities across the Greater Toronto and Hamilton Area… 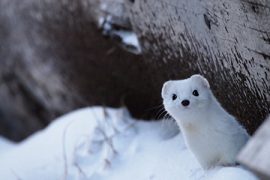 We’re all ears, OCAD U: NSSE

If you’re in your first or senior year at OCAD U, you should have an invitation in your student email from President Diamond to participate in…