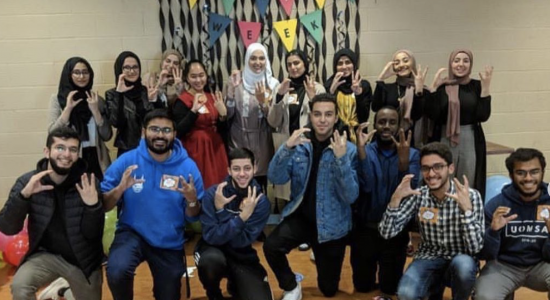 Earlier this month, Campus Life Coordinator Brent Everett James had a chat with leaders from OCAD U’s Muslim Students Association. Read about how the MSA stays active and keeps connected – especially during these weird pandemic times.

Brent Everett James: Tell us a bit about the MSA.

Shahaab Khan, President, Muslim Students Association: The Muslim Students Association is a club on campus and across many universities and across many countries. We are a group of Muslim students who firstly advocate for the rights and the awareness of Muslims on campus, but also support the student body as a whole, so we don’t want to only help Muslims on campus, but also other groups of people and ideally it’s to help create this bond that is the community aspect, especially because students coming to campus, you know through new experiences, need some sort of support system to help them out through the many challenges that they face such as living away from home, not having any friends, etc. So that’s the objective in a nutshell.

Right now, we’ve exceeded 20 members, so that’s a new achievement for us. We do have many alumni that participate as well.

We meet actually twice a week. On Saturdays we have a Game Night online which is relaxed; no real agenda. A free flow. People jump in and out. And then on Mondays we have our weekly meetings which are a little bit more structured with an agenda and items we cover.

Hanin Ibrahim, Vice-President, MSA: The weekly meetings are on Teams around 9 or 9:15 PM. The time is flexible depending on everybody’s workload, the time of year.

Brent: The MSA is one of our most active and high-profile groups at OCAD U. You seem to have a well-organized leadership team. How do you keep your leadership strong, and recruit new students to take the lead as older ones graduate?

Shahaab: It’s part of the cycle of any group. It is important, as leadership prepare to graduate and move on, they look to members of the group who can help run the club the next year, so that’s really important. But staying active and having a good team helps. Over the summer, one of the things we did was we would put together initiatives with many different members. We wouldn’t necessarily have a dedicated role for everyone, but they would take a role to see what they liked and didn’t like, what their strengths are, etc.

Slowly we were able to define positions with the amount of people we had, and it showed what people were best at and what they wanted to do. But, at the same time, they’re not limited to these positions. The positions are always changing, and we like to explore new opportunities for them to take, you know, roles that they’re not accustomed to, just to try out new things.

And one of the things with the MSA itself is it’s a place where you can make mistakes and you can try new things because that’s how it should be. People should have an opportunity nowadays to try event planning to try leading their own sort of event etc., because that gives them an opportunity to develop skills, but also to try new things. So that’s how our leadership principles work.

Hanin: We’re one of the smaller MSAs around Ontario. Roles are not limited because a lot of times we need to help each other out to achieve things at our deadlines. It’s very much based on group and teamwork; it’s the team that keeps this going and we wouldn’t have made such an impact on the OCAD community, as you say, if it wasn’t for the collective efforts of the whole team.

Shahaab: Exactly. Whenever one of us are isn’t able to meet or achieve certain things, then we help each other out. And that’s what team is supposed to be. I mean, just because I’m “the President” or Hanin is “Vice-President” doesn’t mean that we sit and do nothing. We’re still participating actively and many times we’re on the same work level as the rest of the members.

Brent: Can you offer any tips for how to keep a student group active and engaging?

Hanin: I joined the MSA in in March and can say that from my observances of Shahaab, when Coronavirus hit, Shahaab, did not let the group go silent, which is something that happened across the OCAD U community when people retracted into their own bubbles. He kept messaging through our WhatsApp group, along with Ahmed, the group’s former President, asking all the members “How are you doing? Do you need anything? We’re here.” We still held meetings on Teams, which is how I first got used to Teams and online meetups. They still had their weekly meetings, but it was just on the virtual platform. It’s also about being very interpersonal, talking to a group in a meeting, but after the meeting you go one-on-one and check up on each person individually, reflect and get feedback from the members.

Shahaab: A lot of the time, we know month-in, month-out, what we’re trying to. It’s a trial process. We’re trying new things and then we’re getting feedback from people that attended events, people that help organize the events, and we’re seeing how it goes. Summer itself was quite a trial process itself: “How do things work in this new normal?” And so that was an interesting experiment. It’s a team with mutual interests, which is really important. I think that if the team wasn’t interested and dedicated from the beginning, then we wouldn’t have the success that we do.

Brent: What are some of your most successful events, programs or activities since the pandemic hit? What about these events made them work so well?

Shahaab: I’d say our number one is our Game Night, which at times we opened up to the OCAD U community and at times it’s just been an MSA thing. It’s been really productive and a good way for people to just forget everything for the current moment, you know, enjoy themselves, play a few games, meet new people. That’s most important, but some of our workshops have been successful as well. We’ve been trying to collaborate with a lot of different organisations, such as mental health organisations, individuals who are empowering in their community work and their service to people, but also you know, in art and design, or others that help the OCAD community as a whole.

Hanin: In our ‘99 Names Series’ we post every Friday a name of God with the translation of what it means. We as Muslims believe that God has provided us with 99 names of His, and each name represents an attribute He has, making it easier for us to understand, relate, and supplicate to Him. An OCADU alumni provides us with the photography for the project.

Moreover, I think the initiatives or programs—not necessarily just events—that have made the most impact, were ones where we collaborate with students from OCAD. Shahaab has reached out to photographers from OCAD, for example, and we’ve highlighted the resources and skills provided by the creative community of OCAD. It’s a nice way to showcase their talent.

Shahaab: We’re working on something now, a call for submissions from the students, for Islamic Heritage Month. One of the important things is to highlight the Muslim community because we want to see their contribution. It’s important for us to reach out to the Muslim OCAD students and see their work; whether it’s a display of their own personal challenges or their identity as a Muslim.

Brent: Describe some challenges your group, or its members, are experiencing.

Hanin: Right now, everybody is getting very busy and it’s harder to navigate MSA tasks along with studies. That’s the first one that pops to mind right now.

Shahaab: There can be many challenges, day-in, day-out, that are part of the process as a group. You’re always trying to get better, so you try to learn from them. Every experience, or every “mistake” isn’t necessarily a mistake, but a learning experience. During the summer, a lot of our initiatives were pumping out on a very consistent basis, but now, with schedules changing and people getting busy, of course we face challenges, but that’s where we pick up the slack for other members and that’s where the team building group dynamic really comes into play.

Hanin: Another one is definitely raising awareness for events during the pandemic. We did Game Night twice, open to the OCAD community as a whole, during the summer. We didn’t get any new members or new participants, and from that experience, we learned that we really have to put in a lot more time and reach out to a lot more services and other clubs to advertise, so we can reach as many students as possible. Timing is challenging too, because OCAD schedules are all over the place, it’s hard to find a good time for all.

Brent: What do you have coming up in the next few months?

Shahaab: This month we have our call for submissions, which I mentioned, but also Charity Week, the last week of October, where we collaborate with many other MSAs from different universities, raising funds for a good cause, mostly for orphaned children. Everyone is coordinating different events for this cause, so one of the things we’re working on is an Art Battle which will be live so people can participate and battle, but at the same time, raise funds. There will be other events related to this that we want to surprise you with, so we’re not going to give all the details, but we do have other events coming up, whether it’s Game Nights—we try to have those frequently—and another “Navigating Online Learning through COVID” workshop with Naseeha, a youth mental health organization.

We also have a few interesting collaborations with other speakers and artists which we’re looking forward to presenting over the next few months. And hopefully restrictions will ease up soon so we can plan a few in-person events, if possible, such as an Iftar potluck, at the conclusion of Ramadan, when we break our fast. 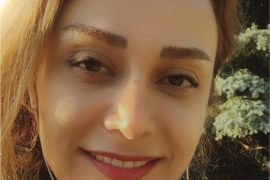 “Hi everyone. My name is Raha. I am going into fourth-year Drawing & Painting as my major, and Integrated Media is my minor. I have…

Meet a 2021 Peer Mentor: “Hi! I’m Tina Giang and I’m a fourth-year Illustration student, currently located in Toronto. This is my first time being…