The video repeats most of the text on this post.

The work can be found here

The code can be found here (feel free to use)

Dream logic manifests in the feelings, forms, and behaviours of the objects that live within the dream spaces they govern. Like other things, it is compelling because it exists in a place between elusive chaos and predictable order. I think this is what makes it an interesting subject to involve with the generative art process; characteristic of both is the ability to elicit primal feelings through the unexpected expression of an internal logic.

I was interested by the ideas in Sol Lewitt’s Variations of Incomplete Open Cubes. By exposing and hiding different parts of a shape, the mind is given space to fill in the rest of the information. This can lead to imagining a more exciting and freed form than the original structure. I wanted to apply this idea to the unimaginative notion of a room as a box. By using randomness to create variations of suggestive cube structures and compose them together, I was able to see new forms emerge to shape inhabitable dream spaces. 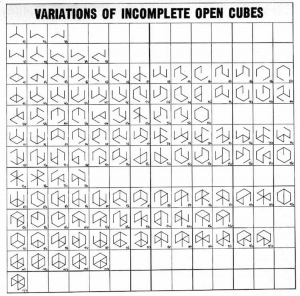 This work consists of a path made of 100 randomly generated consecutive points, and a series of forms (lines, planes, tunnels) that are derived from the features of this path, accumulating one layer at a time. The expression of this system is inverted in sequence, however. The derived forms are visible from the start, hinting at the eventual journey of the path, but the path itself is slowly revealed over time. 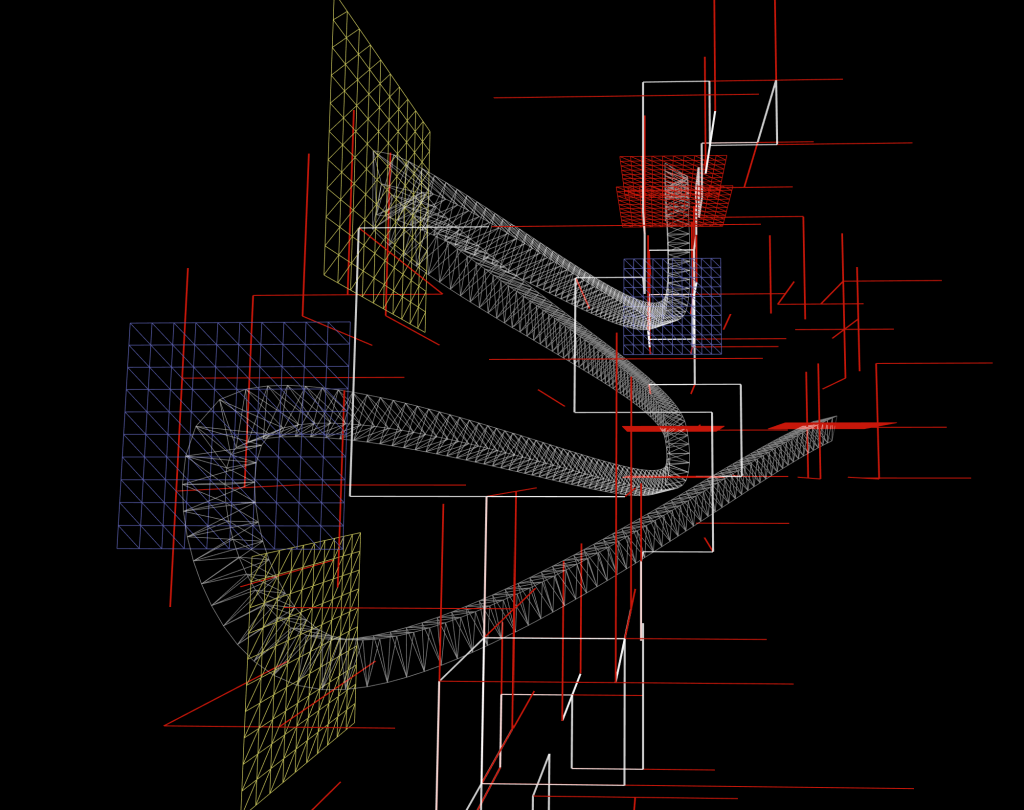 The rules were built on top of each other through experimentation, using three.js as the visualization and coding tool.

1 – First, 100 randomly consecutively generated points. A point must be 1 unit away from the previous point along x, y, or z axis in positive or negative direction.

2 – Lines are drawn at points in the path where the path reverses back onto itself (ex. point A to point B, back to point A). 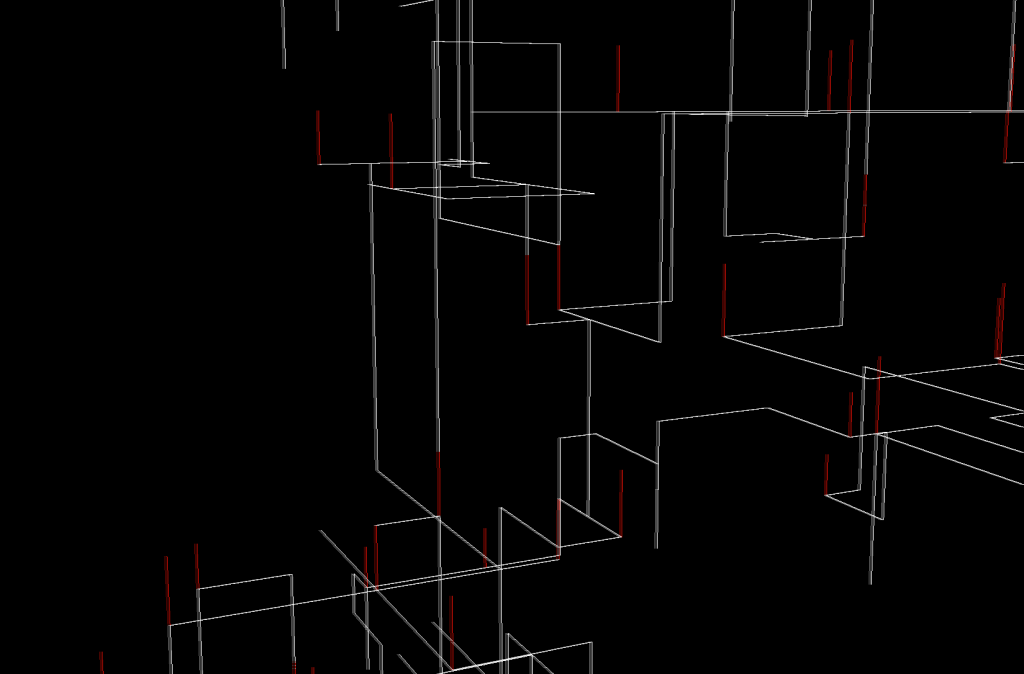 Here are early renders that demonstrate this rule. Below, you can see how the path reversal lines hint at where the path will lead, but cannot reveal it exactly as there are many path possibilities that can cause each line. 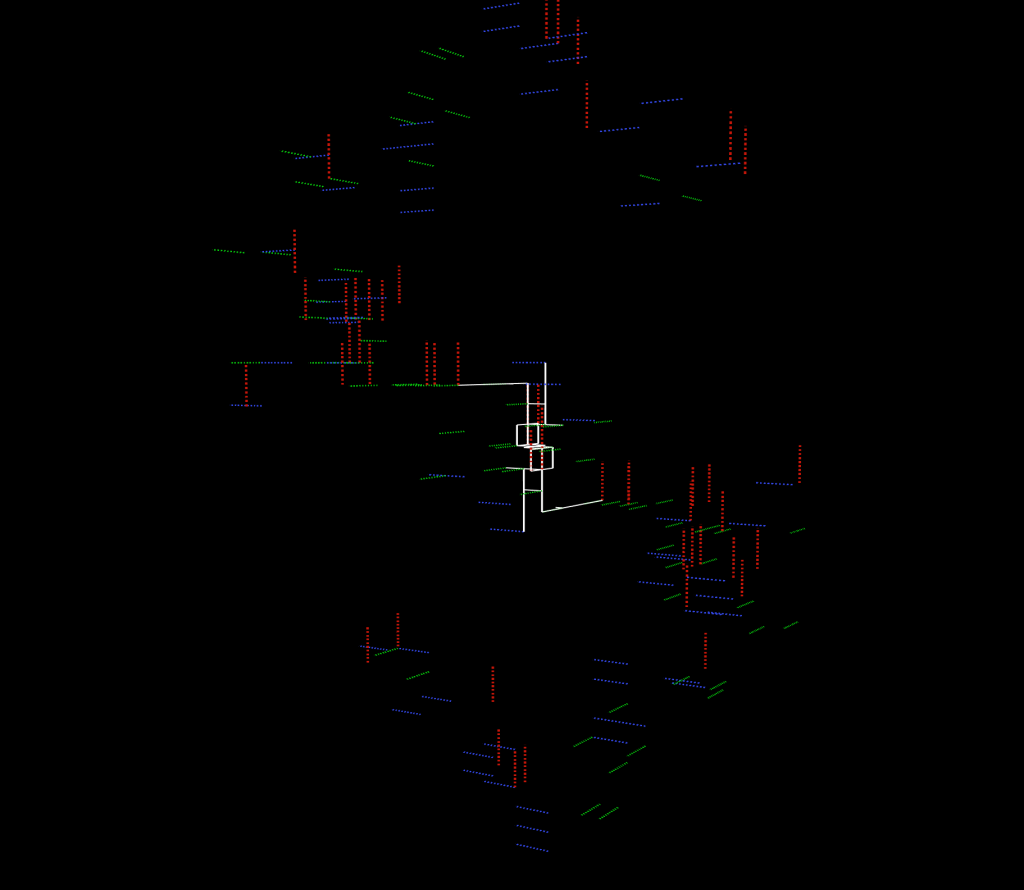 3 – Planes are created at the points where there are two red lines drawn consecutively in the same direction. These are places where there has been a lot of back and forth movement coinciding with each other: a high density of deliberation over which direction the path will take.

Early trials of marking the path reversals (shown below) included various sizes and colours of planes and spheres. 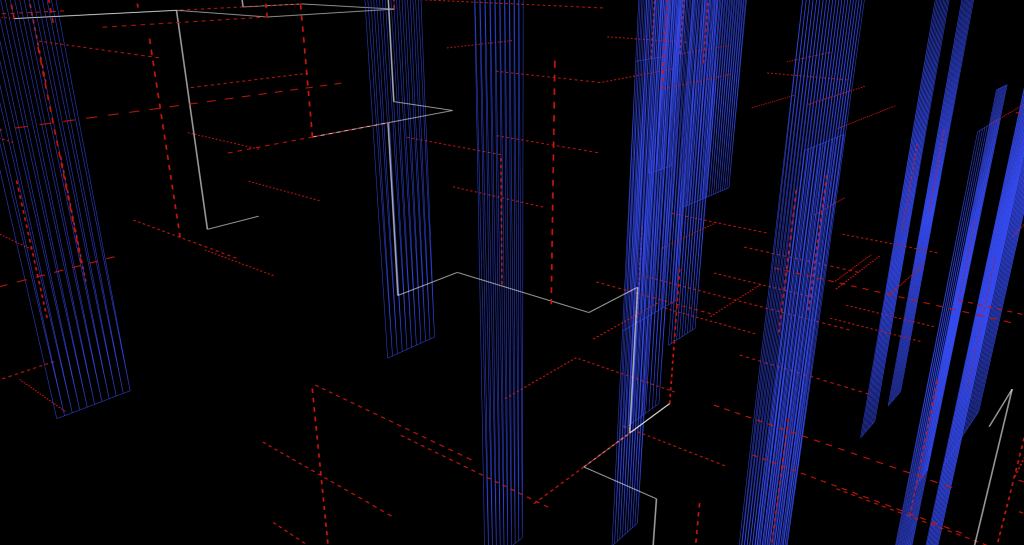 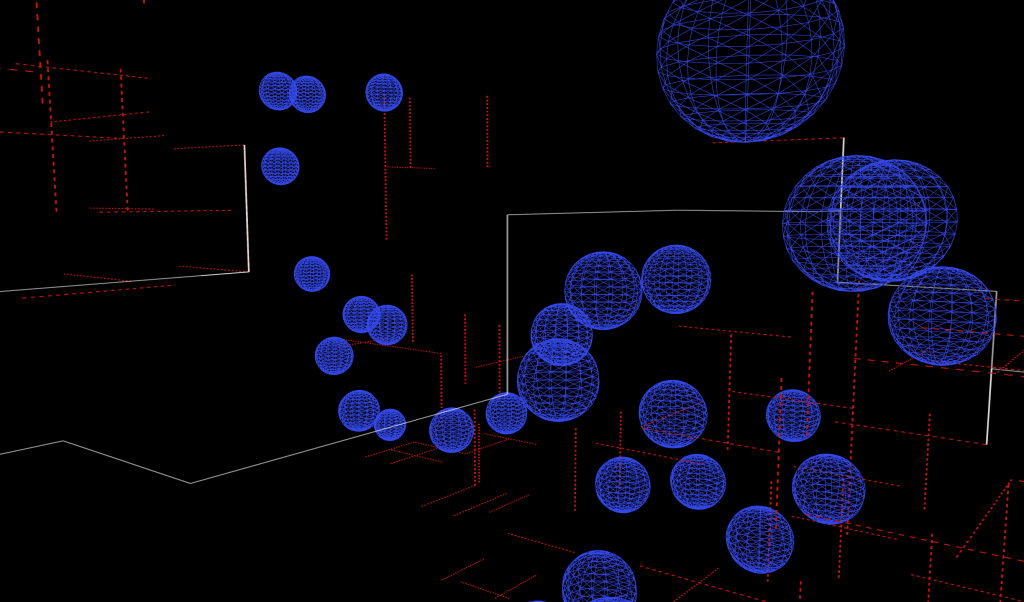 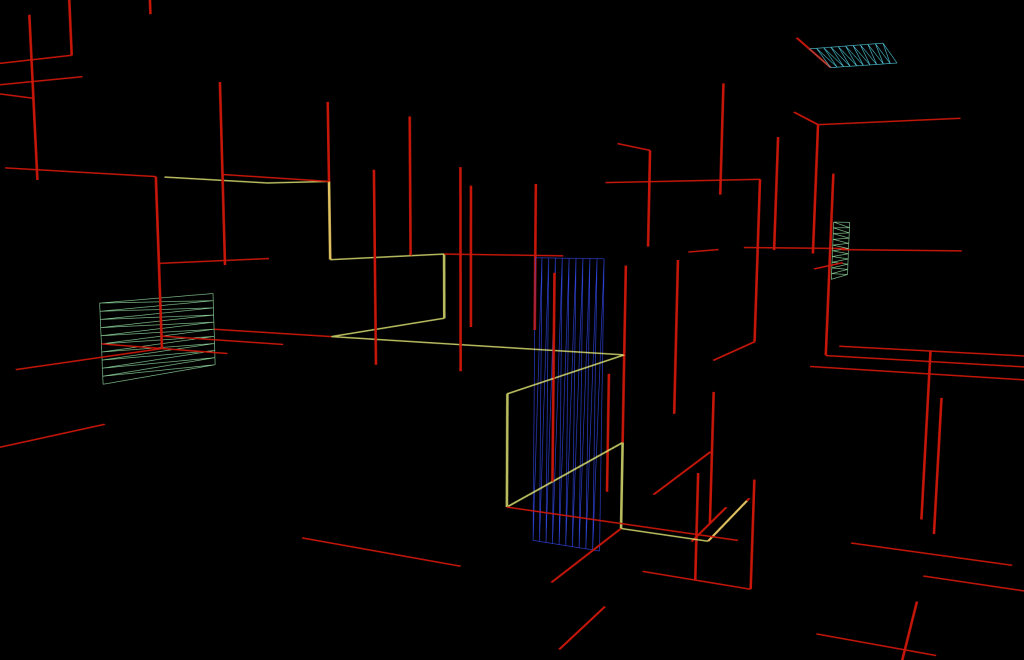 Ultimately I chose to stick with one unit sizes and primary colours due to their simplicity and popular reference to simple units and axis. 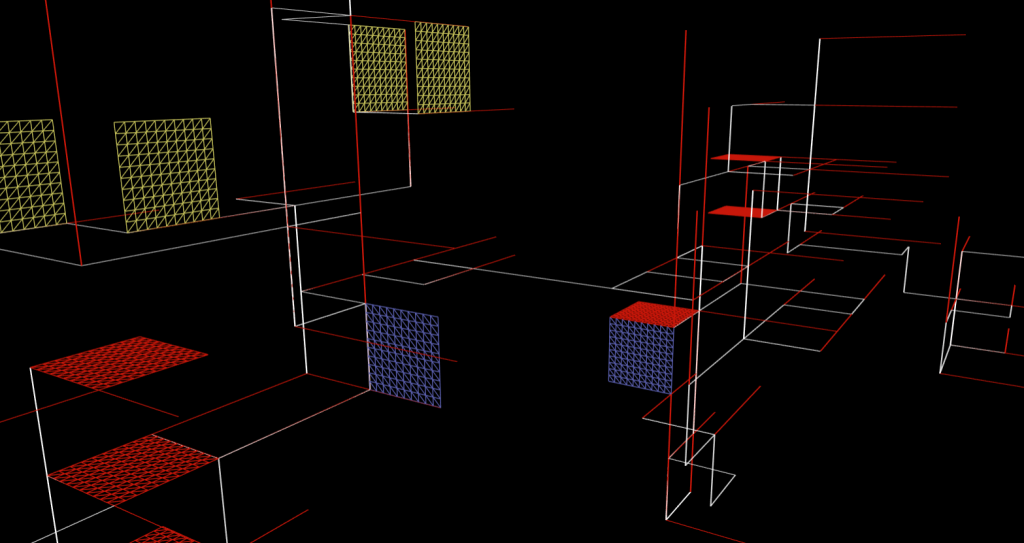 4 – Finally, the tunnels are drawn connecting these planes, visualizing a higher order journey through the path’s moments of deliberation and reexamination. 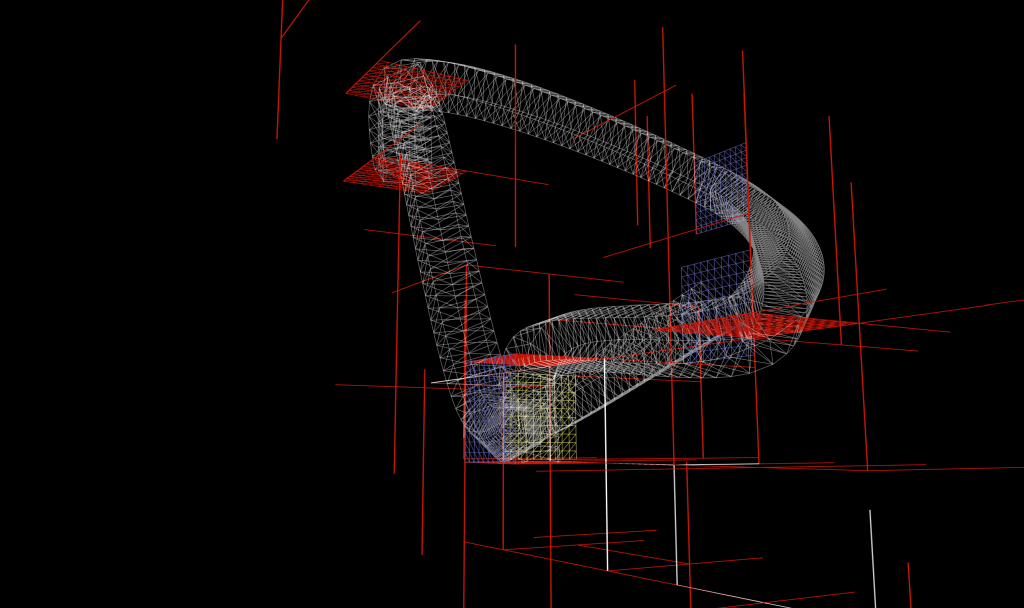 Resulting spaces can vary quite a bit. The exact details on determining placement, colour, and rotation of forms can be found in the code comments. 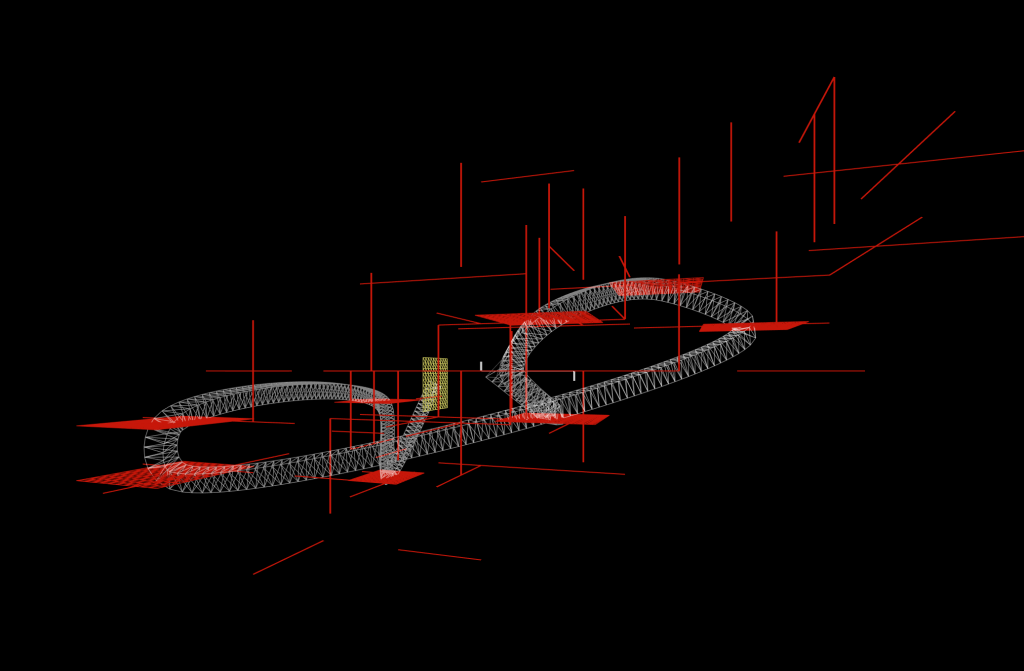 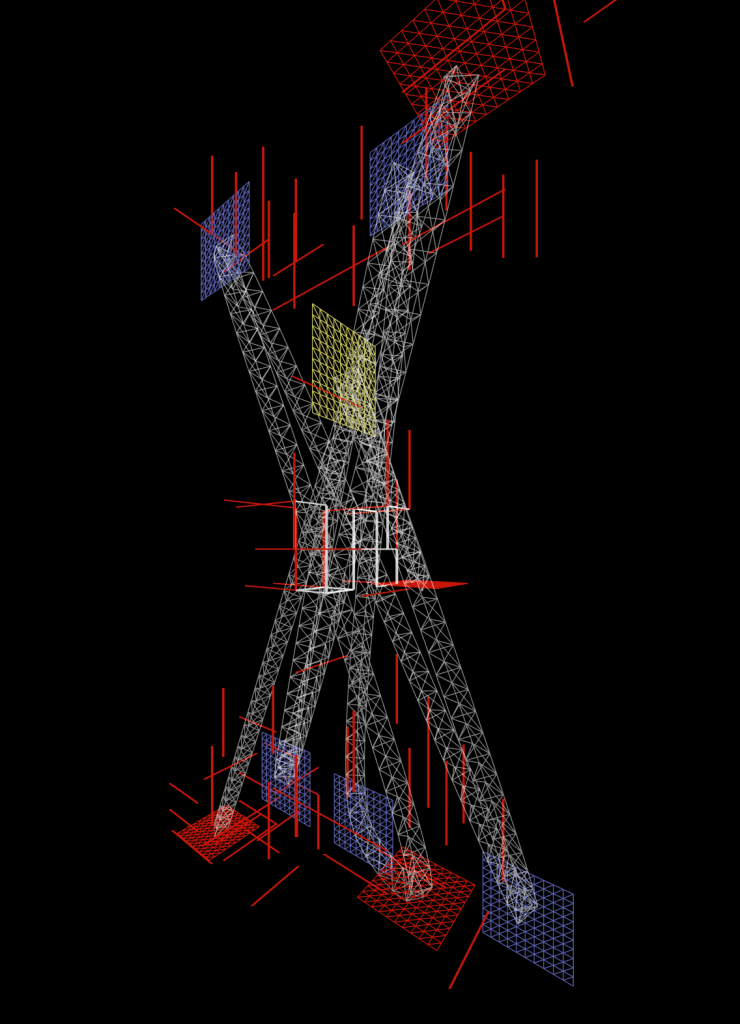 2 thoughts on “Variations of Open Paths”