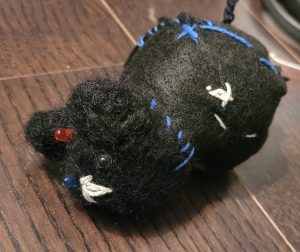 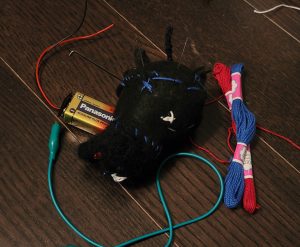 This sad looking Frankenstein cat was meant to be a slightly scarier version of a pin cushion. Since starting this section of Atelier I have re-found my passion for sewing. Because I enjoy more absurd things, I wanted to create sort of a Frankenstein cat in which pins of electricity give it life. Depending on where you would strike a needle through the cat one of its three eyes would light up. Not only would it be an adorable addition to my sewing kit, but it could have also been a fun game of Russian roulette the first time around, before memorising the positions. It is a mix media piece that was inspired by two separate projects I have attempted throughout my trials within this medium. 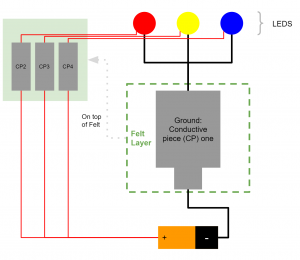 As you put a needle through one of the CPs onto the Felt layer the circuit of the specific LED will connect to the ground thus turning on that specific LED. 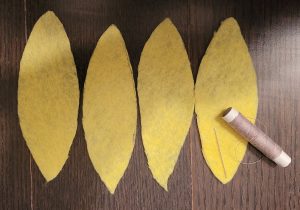 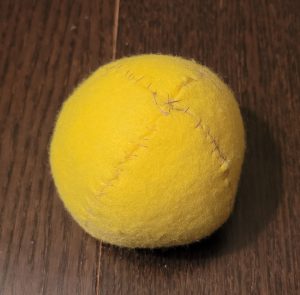 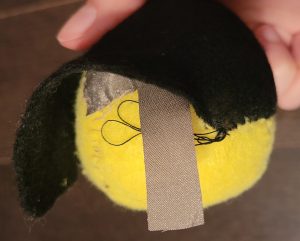 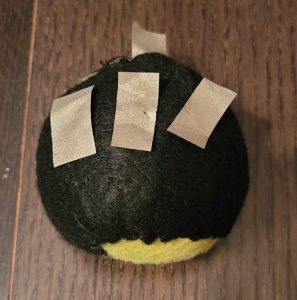 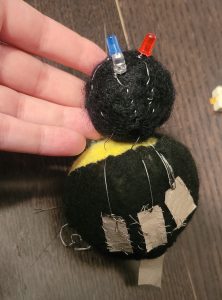 Here you can see a couple of the steps outlined before the final product.

Unfortunately as it can be seen in the video, the sensor did not work as well as I would have hoped. I had received materials like conductive thread very late and rushed my wiring in order to complete this sensor by today. Unfortunately my initial design technique and approach were not efficient so, likely, a lot of my LED wires got tangled and resulted in them not even turning on. Only one LED remained powerful enough to shine through thankfully allowing me tho demonstrate the potential of this sensor.

Overall I am proud of my creation, I think it turned out good at least design wise having both the obscurity as well as the cuteness desired. I would have really liked to have been able to fix my circuit. I had tested it prior to adding the LED and I was certain it will work until I reached the head. In the future, in order to fix this error, I will make the centre of the head a grounded piece and make sure I connect the base for all LEDs prior to connecting them individually. In addition I will also have a thicker layer in between the ground conductive piece and the separate ones on top. This will provide the space I need to comfortably stitch conductive thread without fearing that it will touch the lower layer. While there were many errors in my design this offered me the opportunity to understand how I can incorporate a  small battery in my creation and also understand better how to take advantage of my materials.

Unfortunately now it is merely a regular yet eccentric pin cushion, I hope I will be able to create this piece again and potentially add an additional pressure sensor to it that would make some sound or keep track of the needles added.