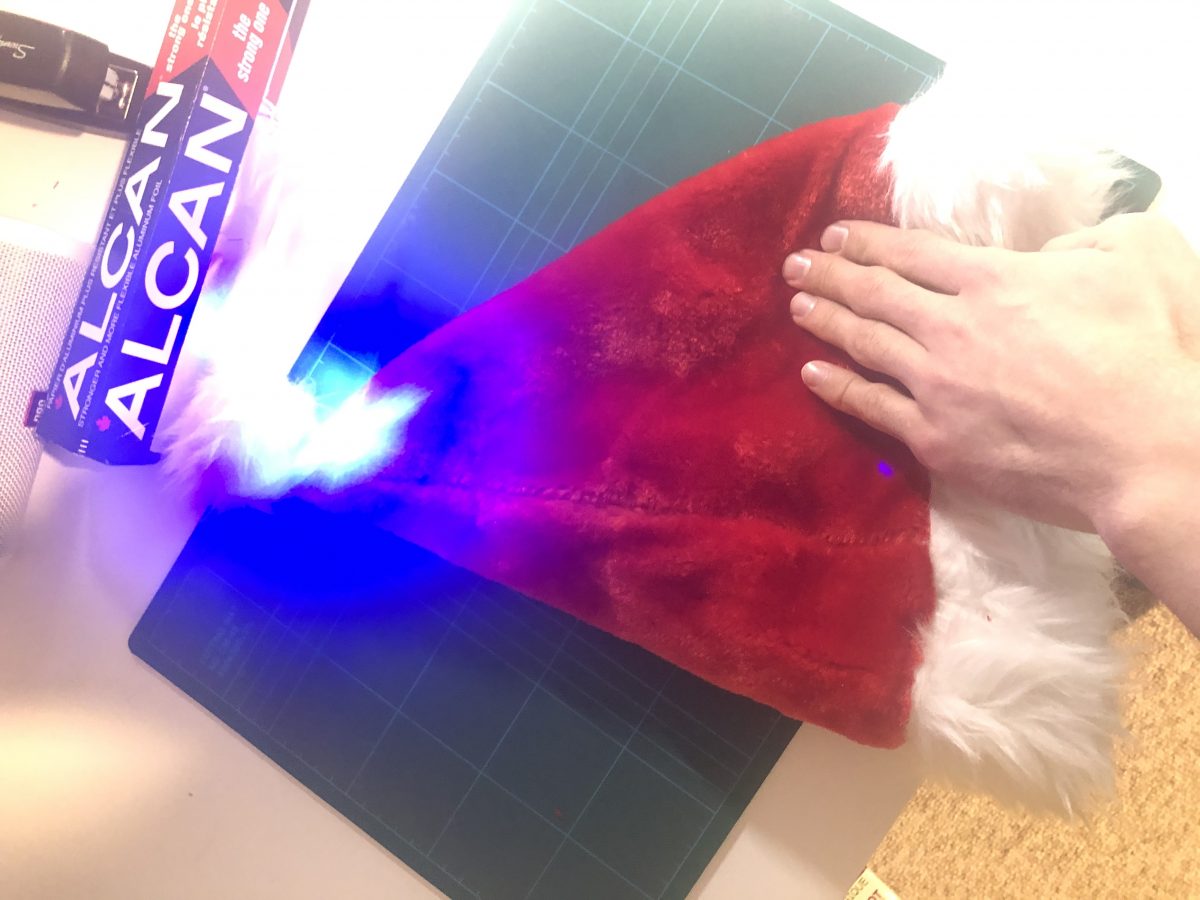 For my swatch, I decided to expand upon the analog sensor that I created and create a hat that activated based off of pressure. Originally, I wanted to create a propeller hat that activated through a sensor. However, I ended up not being able to get a hold of the materials that I would have needed to not only make it, but to also create it compactly (Adafruit, Conductive Thread, Conductive Fabric, DC Motor). I then decided to account for that by using a hat that was much larger in size so I could store all of the larger components within them: a Santa hat! This hat is able to light up like a Christmas tree whenever you press the sensor on the forehead.

I first attempted to recreate the sensor from before, albeit more compact in order to fit in the hat better. 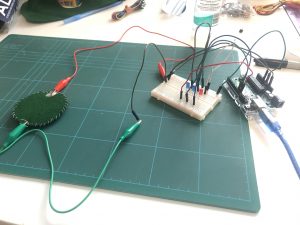 I then attached the LED bulbs I had to the top of the hat and used copper wire and M/F wires to connect them all. NOTE: Apparently, my copper wire from before wasn’t working because it had a plastic coating on it that I never noticed, so I used sandpaper to shave off the layers on the edges. 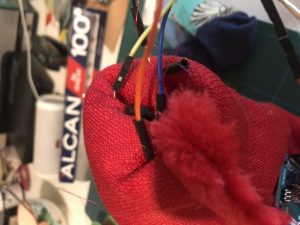 I then went and sewed the Arduino Uno into the hat and accounted the length of the hat by adding wire extenders. 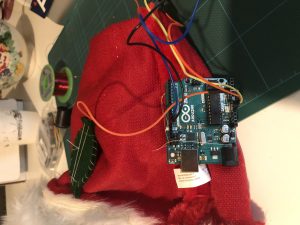 Afterwards, I sewed the patch onto the front of the hat and connected the wires and resistors with alligator clips and copper wire. 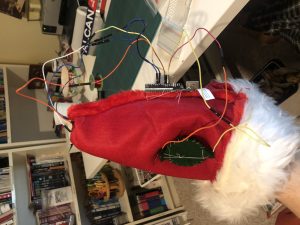 What’s nice about the hat is that due to its surface, you aren’t able to see the thread appear on the front, so it looks like a completely normal hat at face value. 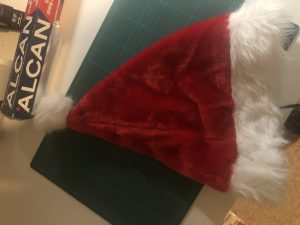 Afterwards I quickly wrote the code up and Voila! I’m generally happy with the design of the hat and the fact that I was able to make it with the limited supplies at my disposal. I can’t wait to get a hold of better supplies in the future so that I can explore more in the future.

Neetu’s piece was definitely my favourite piece during the presentation based off the idea and execution. Instead of creating an environment in front of you in which you can observe from a distance, she puts you right in the middle of one. Being able to explore the various stars, planets and satellites in your own home is a wondrous experience. The fact that you can actually walk up to them gives you a much better understanding of spatial relation than an app like Night Sky would. She also clearly put in a lot of effort to fill the environment in all directions so that you are engaged no matter where you go. The models are also quite amusing albeit simple.

What was the process behind making it?

What were the different stages, challenges that you came across?

What tools did you use (besides Aero, if any)?

What were some of your motivations?

If you could expand upon it, what would you add?

What potential could you see for an app similar to this?

What was your biggest takeaway from this entire experience? 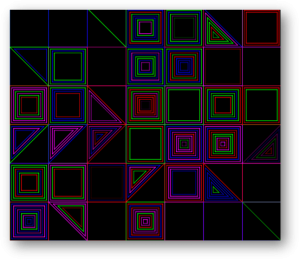 This demonstration was created in JavaScript using p5.js. May update final project link.

1.Divide a page or screen up into a grid.

2.Choose any random cell and draw a square or a right-angled triangle within it using 1 of 4 colours of your choice.

3.Repeat this step. If you land on a cell that you have already drawn in, draw a smaller shape of the same type and orientation within the existing shape.

4.If you land on a cell in which you can no longer draw another shape within it due to size, erase the cell. 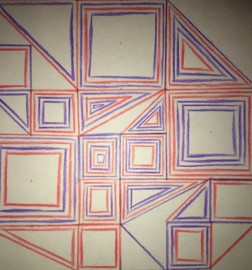 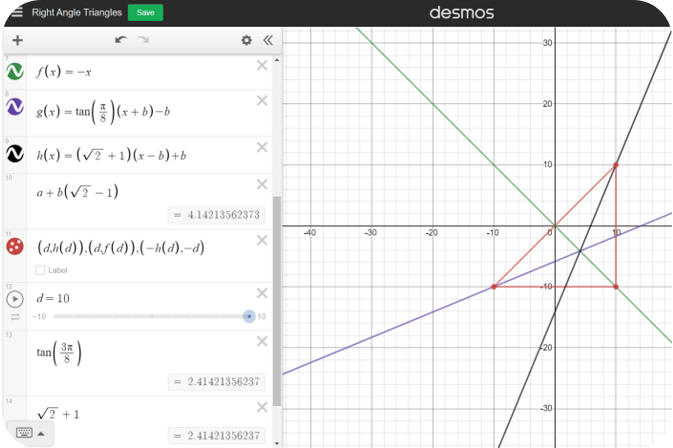 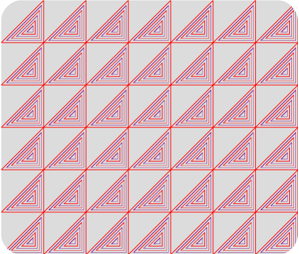 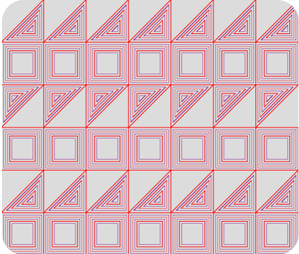 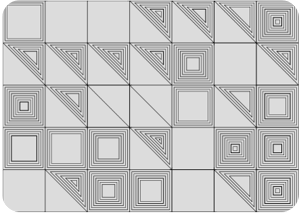 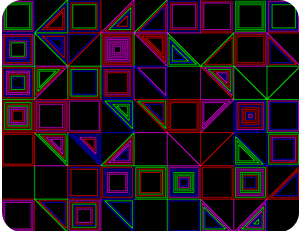 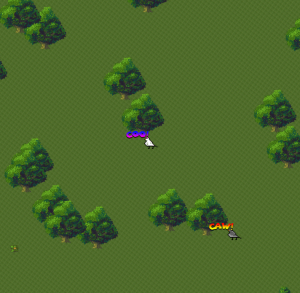 It is a social interaction/experience game involving two species (Raven or Dove) of birds interacting with each other. It is a sandbox/open-world game where each player individually controls a single species of bird, which can move around using arrow keys. The players are incentivized (when they see a bird call appear in a certain direction) to find the other players in the forest and interact with them. However, the map is large, and with random spawn points, it is difficult to find other players. Fortunately, all players have a call function (spacebar), also known as a bird call. If you see a bird call (either a coo or caw) in a certain direction, you can follow that direction until you get closer and find the other player. If you or the other player start distancing yourself, you will not be able to see their call function. 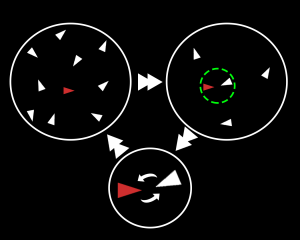 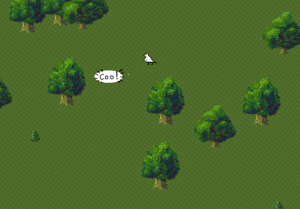 We added assets / sprites (tree and bushes) that cycle through an animation loop and are randomly placed throughout the canvas with colliders (only on the trees).

We tracked the location of each player / bird to determine their location value in the canvas and compared the distance between players. We also added a random spawn point for each player on the scene and each time a player moves, their location is sent over PubNub.

An interval timer was added to the bird call to prevent spamming and the life span of the “caw” sprite was increased so each player has more time to view the bird call on the screen.

Screen recording of the Project:

Wireframe – Planning of the Bird Game 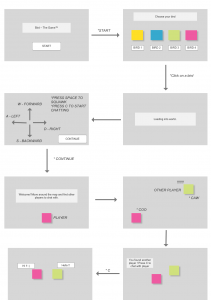 Birds in Legend, Fable and Folklore 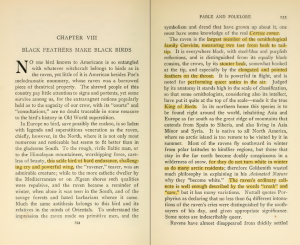 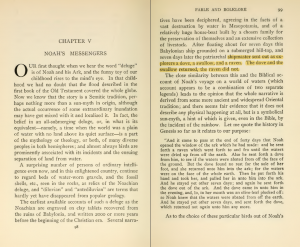