This piece was created out of my love for 3D pens, VR, and filters. I wanted people to have the ability to create art wherever they are. I felt that AR, Augmented Reality, was the most apt solution to this. This is due to the wide range of devices that can support AR applications or files. One famous example of this are the filters that we so frequently use on our phones. This entire project would not have been possible without the help and guidance of my friends who pointed me to the necessary resources to make this project possible. 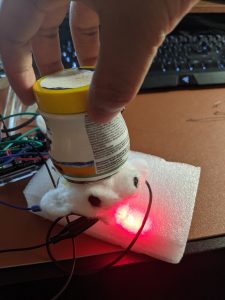 Coming into this project my partner and I had an issue: underfeeding or overfeeding our poor Siamese fighting fish. At its root was assuming that the other person had not fed/already fed the fish. I needed a solution that

1. Fit in our home’s aesthetic

2. Could indicate whether the fish needed food, typically after 24 hours.

With these design requirements, I decided to design a needle felted koi fish which fit into the design of our home. Additionally, there would be food in its mouth (i.e a red led as this is the color of fish food) which would light up, alerting me and my partner to the fish and their food. Below is my process for the entire ordeal:

In the end I used the following materials:

I would like to add that this swatch is a rough example of what I wanted. I feel like there is a more efficient way to do this idea, and one that’s far more aesthetically please. I am, still, proud of what I made as it manages to tick off my design requirements. For people who attempt to do this, I would like to offer some advice: 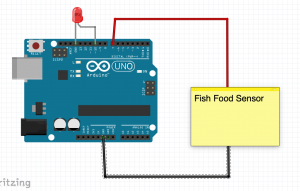 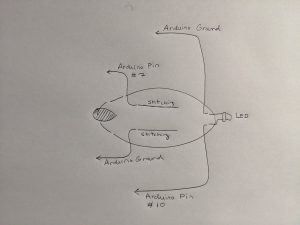 Conclusion: I had a lot of fun with this project, but more importantly I made something useful while also showcasing my skills that I gained from this class. Mainly in my ability to efficiently use materials (minus that X conductive wire debacle) and my resourcefulness. These skills allowed me to create something from scratch, particularly something with practical manual application which would have set me back a good 35 dollars for a reliable automated one. I think the closest source I can find to the idea of a bridge switch is this one: https://www.youtube.com/watch?v=SpyGdoPPV7k

Thanks to Iris Andrici and Ryan Boyd who pointed me in the right direction throughout this entire unit. 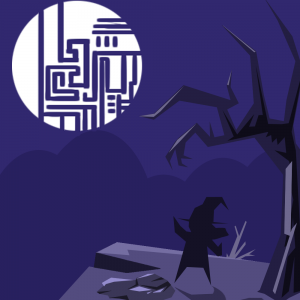 Iris Andrici’s QR story book  follows the story of a little witch as she explores a new, Wizard of Oz-esque world. As always, the illustrations that the creator makes are absolutely stunning. Having insider information, Iris Andrici disclosed that this project was inspired by her fascination with popup books. She believed combining popup books with AR would not only make the experience portable, but provide a totally new form of storytelling.

So how was the experience of creating this AR filter? Below is the exclusive interview conducted with her:

A.B: So what about popup books, you know, fascinates you?

I.A: What fascinates me about popup books is the popup feature that they have because it changes the way that something is being told. Something popping up already makes the illustration and visual aspects of the story more interesting than what is being written there. The writing aspect of it is just an addition to what the pictures are already making wonderful. On the other hand I also like the potential of interactability that popup books have. For example, you have sliders that allow houses to move or to change to colors of their windows, etc,etc. I really enjoy that. I think it is really fun, particularly for children, but also I think it can be turned into something fun for adults.

A.B: I know when you were finishing this project you suffered a lot of complications, do you still think you were able to emulate that exact emotion with your final AR project?

I.A: I don’t think I was able to emulate that exact kind of emotion, almost at all. I am quite disappointed with how it turned out. But the general animation managed to incorporate how a popup book feels when it comes up, but I would have liked something more explore able. I would have liked for my layers to be animated thoroughly and for you to kind of move around them as you change your phone. It didn’t even need to necessarily be in 3D, I enjoyed the aspect of it just popping out of the picture itself but I would have still enjoyed something where maybe you can zoom into the world, or choose to look at a specific window and see somebody do something inside of a house.

“I like the interactability  that popup books have” – Iris Andrici

A.B: I know you just said that you had a lot of qualms a lot of things you’d like to improve with your project, but what about it do you pride yourself with this project?

I.A: Surprisingly it’s not the AR part of it, it’s actually the fact that I learned how to animate it properly in After Effects. I would have liked to use Adobe Aero, but I had to change to… scri-script-hows it called?

A.B: I don’t know what you’re trying to say.

I.A: Spark AR (chuckles) There we go, I mean,  I wanted to used Spark AR originally, but, umm, but it doesn’t support the files that I needed and that I created and if I were to make it in separate layers I would have had to learn a bunch of ways to make a simple animation which just wasn’t worth the time or effort – when it can be so easily done in a program like Adobe Aero.

A.B: So what program did you use in the end?

I.A: I ended up using something called ROAR, which is an online media which is mainly used for marketing. So it was very limited, unfortunately. If I knew that beforehand I would have made my drawings far more colorful rather than as dark as it looked, because it [ROAR] had some sort of features that I could have made  the background transparent and maybe I could have added more little things on top of it by cutting them out like that. But unfortunately I did not know up until the point of using ROAR.

A.B: That’s awesome though.  Final question, what was your inspiration for the story? This little witch girl that was exploring.

I.A: (Chuckles) There was no real inspiration behind it, I just kinda like witchcraft. I guess it’s just part of the blood, coming from Romania and everything and therefore I created a character around that sort of world. But also! The city that pops up around is kinda sci-fi (laughs) so you can obviously see my inspiration does not have a specific narrative. It’s just something cute

A.B: I found it pretty awesome though. Thank you so much for your time!

It is clear that this AR lens requires a lot more work. However, it is this raw potential that draws me to Miss Andrici’s works. I, too, think this story board needs some touch-ups and modifications, but I strongly believe that it is in a good starting position. With enough work and love, I think this little witch girl’s story can come to life. Needless to say Iris Andrici, much like her protagonist, faced many hurdles; uncharted software, horrid paywall monsters, and her own frustrations. Yet in the face of these obstacles she managed to produce a beautifully illustrated page of (hopefully) a future Alternate Reality popup book soon to join your phone. I, her number one fan, cannot wait. Until then, I suggest you follow closely with her illustrations and other art-based projects with great anticipation.