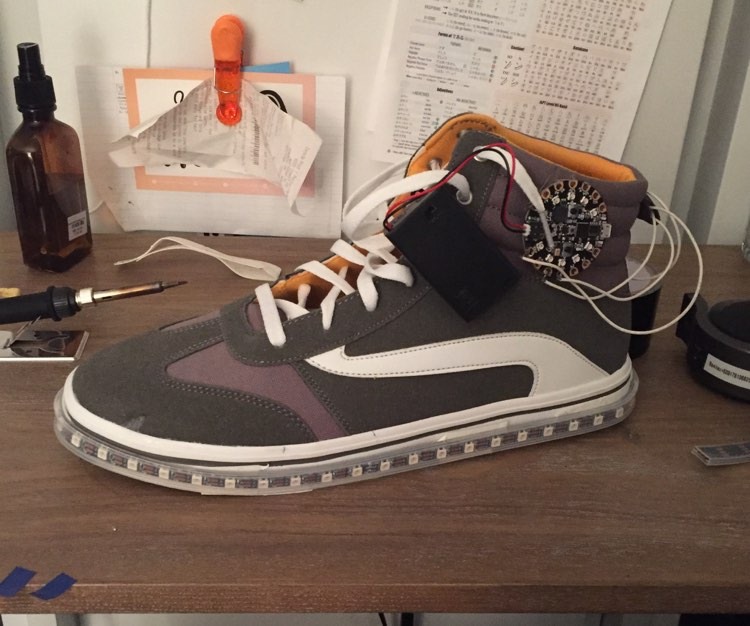 These NeoPixel Sneakers were inspired by the Firewalker LED Sneakers on Adafruit.  The Circuit Playground Express, which is sewed into the high top, is hooked up to a 3x AAA Battery pack that also hooks into the high top of the sneaker.   The cables were soldered from the Circuit Playground to a NeoPixel strip, and there are two conductive threads, one threaded into a pin and the other into ground, taped to the inside of the sneaker.  The NeoPixel strip is activated when the two conductive threads are connected by a strip of conductive fabric which would be sewn into the bottom of your socks, causing the lights to appear only when the shoes are worn.  The code will show a color wipe of each colour of the rainbow when the digital switch is activated. 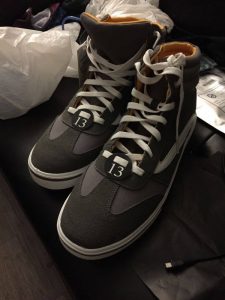 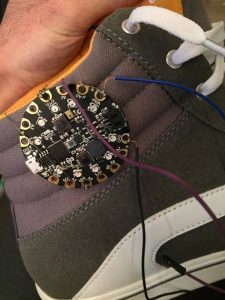 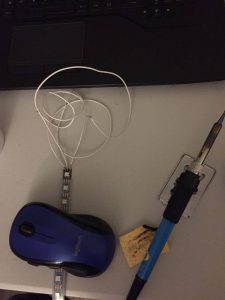 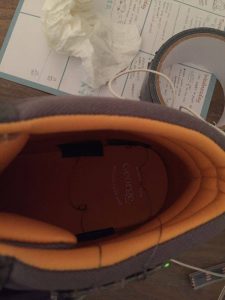 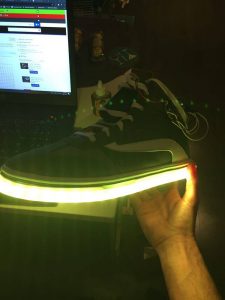 OCAD U’s rising AR technologist Atharva Jadhav has created an unprecedented installation piece of augmented reality that is making waves in Toronto’s XR sector.  Atharva, a second year student in the Digital Futures program, explores what it means to enter a new world in his final AR assignment for the Atelier: Discovery course, where he has created a literal worm hole into another universe.

This worm hole won’t suck you in, but it will captivate and fascinate the viewer, giving rise to many questions about the future of augmented reality.  Weighing in on his achievement, Atharva answers our inquiries on this cutting edge AR application.

Your piece has a very unique mechanic which involves entering the inside of the black hole model to view a 360 picture of a galaxy. What was your biggest influence in exploring this idea? Did this concept draw from any particular area in sci-fi culture, or did you draw from a personal passion that lead to an experimental discovery?

“My biggest influence in exploring this idea was a Spark AR trick which lets you create 2 Dimensional portals that allow you to look into a new 3D world, I wanted to extend that to 3D. I am really fascinated by anamolaus things like Blackholes ,etc. and how they create their own spacetime inside the event horizon so it was curiosity that made me create the hole.”

The AR experience seems to have 4 main components: A black sphere, a layered ring acting as the event horizon that seems to stretch light as it enters, an internal 360 image, and a particle system. How did you create these four components and how did you ensure that they were accurately occluded? In other words, how did you get the universe to display on the inside of the black sphere, while keeping the transparent ring on the outer edges of the sphere?

“Spark AR makes it quite easy to make these components I played around with blending modes on shaders to get the components to display correctly.  This setup consists of 3 spheres, 1st one is the gravitational lens, 2nd one is the black hole itself and inside the black hole there is a slightly smaller sphere with the universe texture. So the Universe inside the blackhole is another textured sphere since I don’t really know how to apply textures on just one side.” 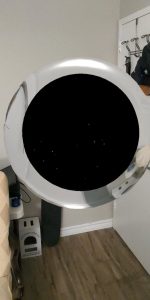 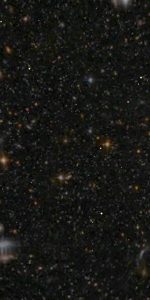 As outlined in the previous question, the components seem to be brought together in a way that seems to be quite a challenge, possibly involving some programming or specific functions in a software that works with 3D models and light dispersion. What software did you you use to achieve this result and what was your greatest challenge in bringing it to life in AR?

“Making this was not hard at all owing to the fact that black holes are such mysteriously simple objects. spark AR allows you to set your camera input as a texture and naturally texturing a sphere will warp the texture I just transformed the parameters until it resembled the warping caused by gravity, I Put a point light source inside the black hole and as the light hits the sphere it lenses and distorts very accurately. I used spark AR only and my greatest challenge was actually the 4 mb limit to spark AR creations or else I could have made it much grander than it is now haha.”

Your work acts as a prototype for a seemingly new way of interacting in augmented reality with 360 imagery. How do you think this worm hole effect can be utilized through AR in other types of applications?

“The idea for the wormhole really came from this realization of how AR is so different from VR in the sense that the dimensions of AR are literally the 3+1 dimensions of our reality. A very interesting place where I would like to see the 360 degrees functionality being implemented is in coordinate geometry. We often see examples in science plotted on a 2D graph, while this provides an accurate enough picture it does not account for things like depth or volume(this is why black holes cause confusion as they are mostly depicted as 2D ‘holes’ instead of 3D spheres). In a future where AR glasses are a thing, I could see how this can be used to summon virtual 3D spaces into our reality and “escape” everyday life for some time. In the field of art I can already imagine beautiful AR sculptures with explorable interiors.”

Writer’s Impression
I believe this application is pushing the boundaries of what is possible to achieve in augmented reality.  The fish eye gravity well surrounding the black sphere was such an incredible touch, as it accurately represented the event horizon of a black hole in a way that can be viscerally felt.  The most incredible feat in this experience is the mapping of a 360 image on the inside of a model, creating a dual world effect that can be traversed based on physical location in relation to the model.  Being inside the worm hole is such a fascinating mind warp, and being given the freedom to walk around the worm hole then dive in is a tantalizing opportunity that many will not want to miss. 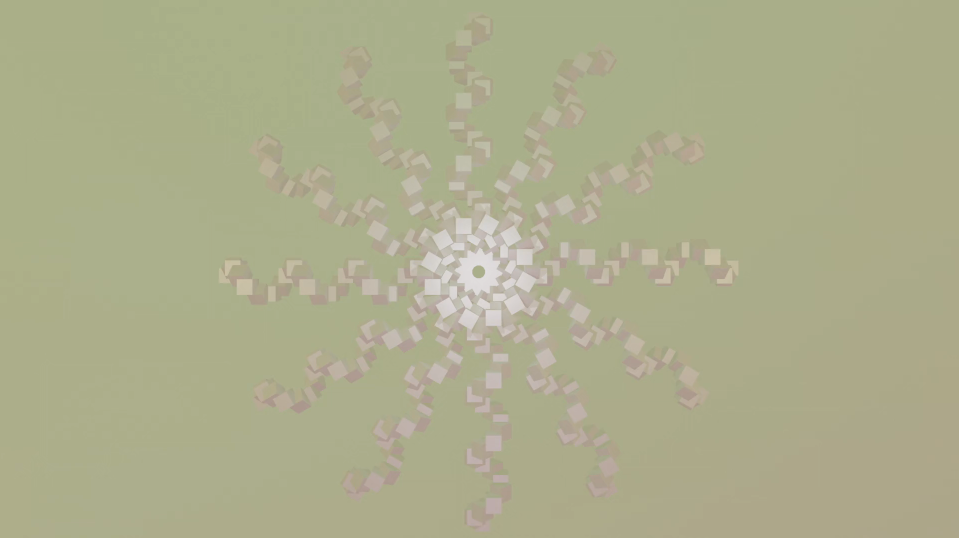 Hello Atelier, this is my final generative art project called Flower of Forms It is created in Blender as an animation that utilizes the array modifier and an object offset to clone and manipulate cubes into rotating spiral forms.

My motivation for this project was my experiences with meditation and astral projection in my early adulthood and their relation to Plato’s philosophy exploring the Theory of Forms, which is an idea dimension of perfect archetypes from which all physical manifestations arise. My experiences lead me to a vision of what I believe exists in this abstract world and I wanted to illustrate that experience through a mandala of primitive forms, representing all the possible states in which these archetypal cubes can manifest in the physical world.

I made this by first starting out with a cube and attaching an array modifier and creating an empty object that was offset from the cube diagonally. I then set the array’s object offset to the empty object and cloned the cube 32 times. Next I rotated the cube on a 45 degree angle. I created a second empty object and offset that by -1m on the y axis, and attached a second array to it, turning the empty object 30 degrees on the x axis I then used keyframe animations to plot out the rotation of the first empty object from 45 degrees to 405 degrees over a period of roughly 16 seconds or 400 frames. I also applied a Noise texture in the background set to 4D and scaled it from 0.1 to 8 over the 400 frames. Finally I added a somewhat reflective material to the cube and added 5 lights(centre white, top green, bottom pink and left/right yellow) to allow a reflective pattern to emerge in the animation that highlighted certain aspects and interactions between the cubes.

Create a cube or any primitive 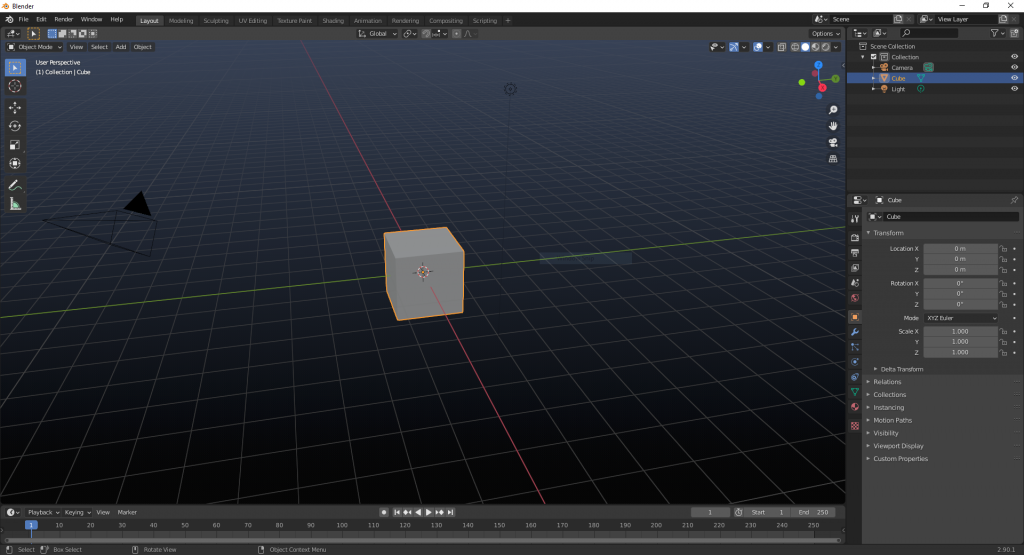 Create an array of 32 clone primitives offset by an empty object. 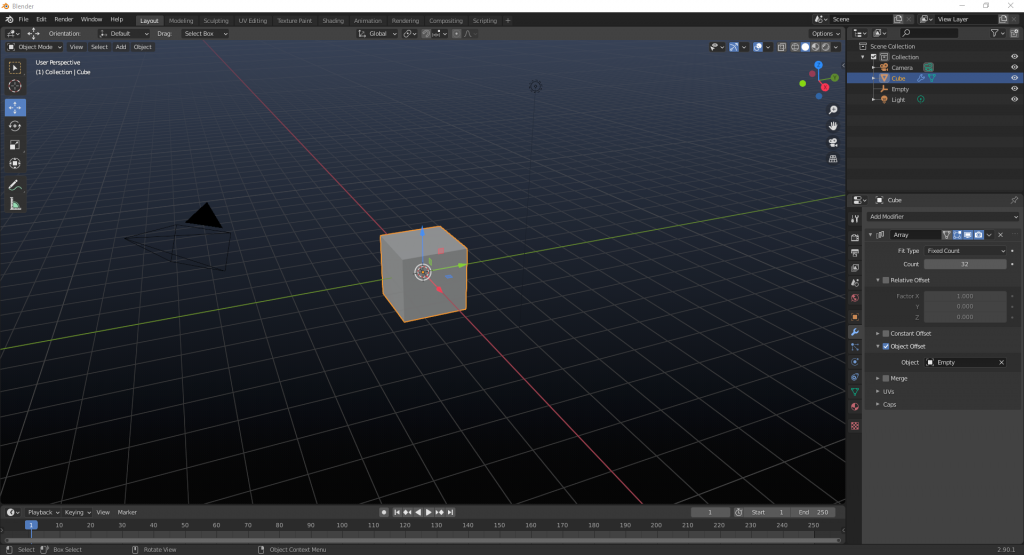 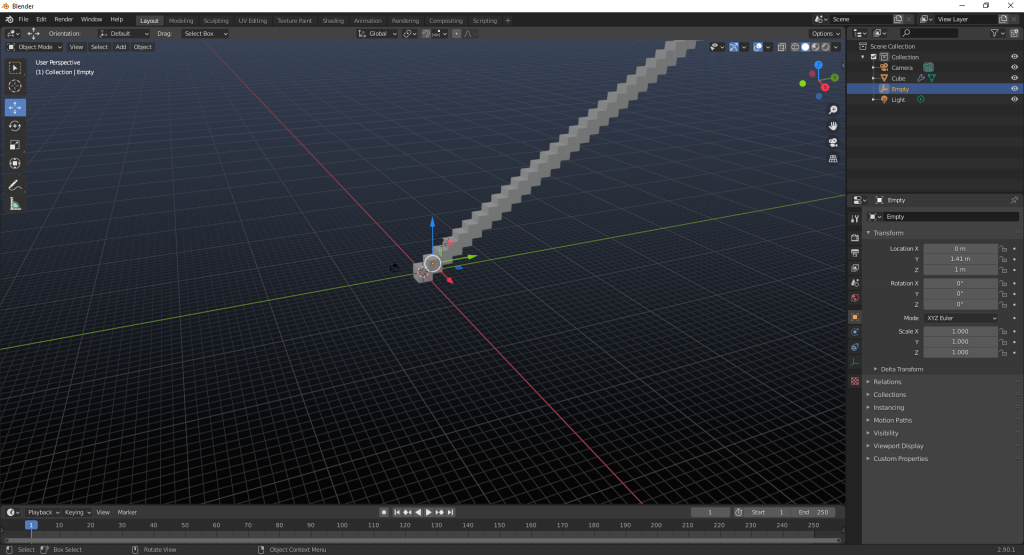 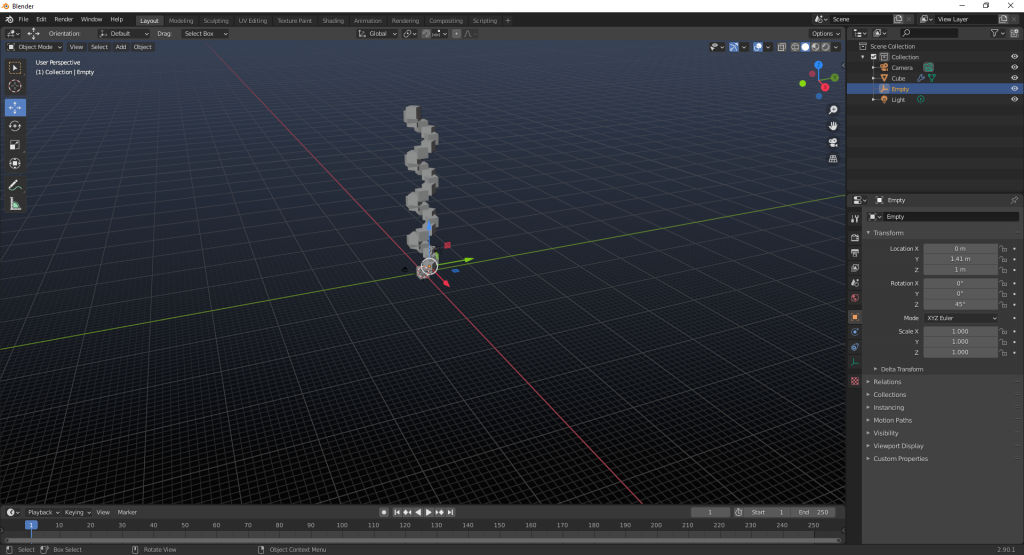 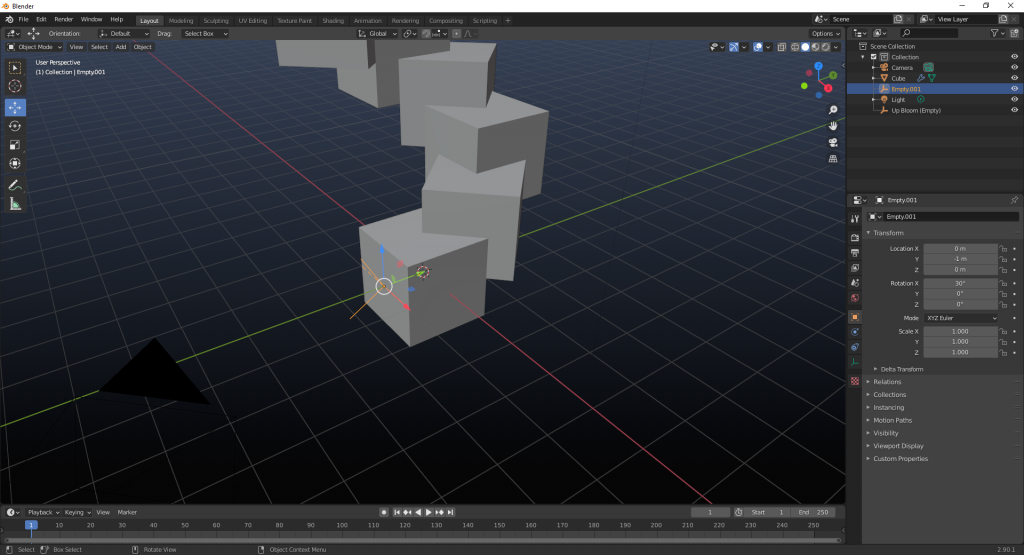 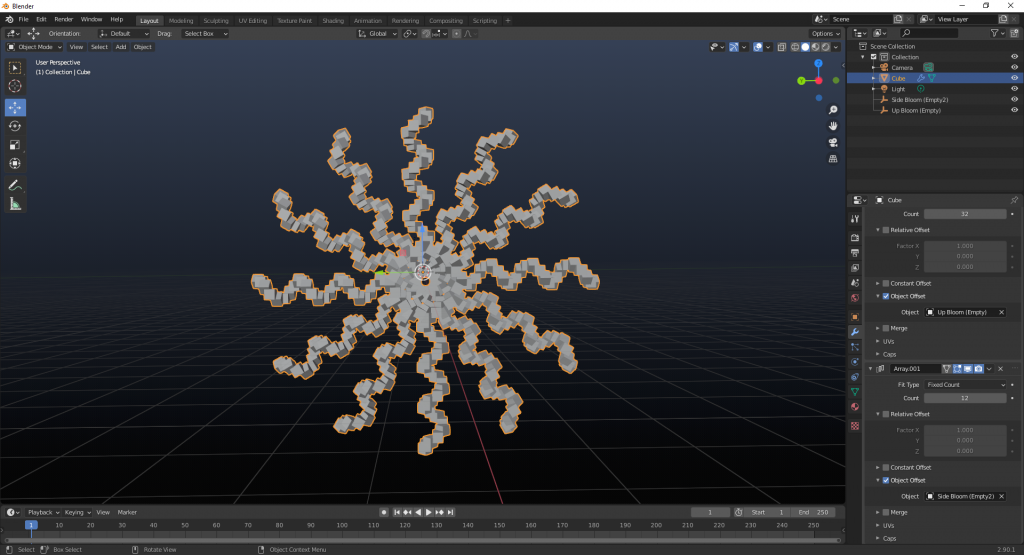 Over a period of 16 seconds, rotate the first object from 45 degrees to 405 degrees (or infinitely) 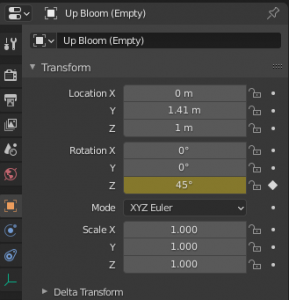 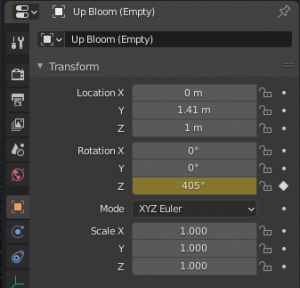 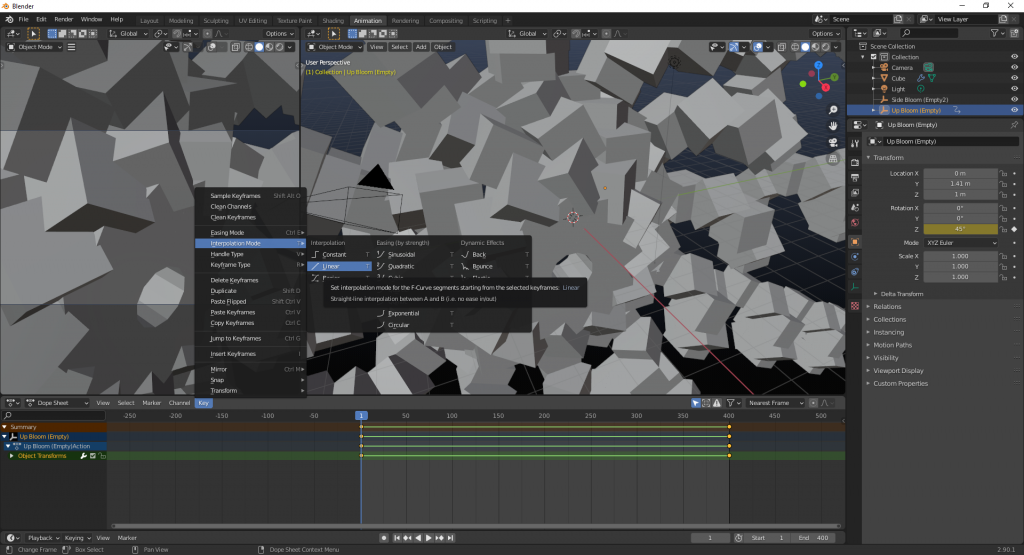 Set a Noise shader to the background scale it from 0.1 to 8 over a period of 16 seconds 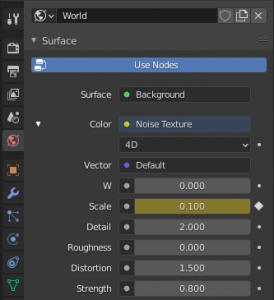 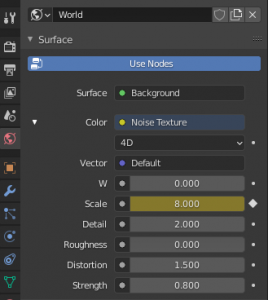 Set the camera at your preferred distance and render the animation.

Thank you for taking the time to view my documentation!