The concept for this wearable is to display if someone wants to be approached or left alone. The wearable is meant to be worn as an armband that is lit at all times when on the wearer. It will display either a green smiling face or a red frown which is changed with the digital switch. The idea was inspired to help people with depression and/or anxiety to display what they are feeling and if they are comfortable with being approached. The smile allowing others to approach and the frown to ask others to stay away. If one displays the smile (with the switch on the right side) but feels uneasy at the approach of certain people they can tap on the red “X” and it will display the frowning face for 5 seconds. Similarly, if the switch is on the left, it will display the frown and change to the smiling face for only 5 seconds when the red “X” is tapped. 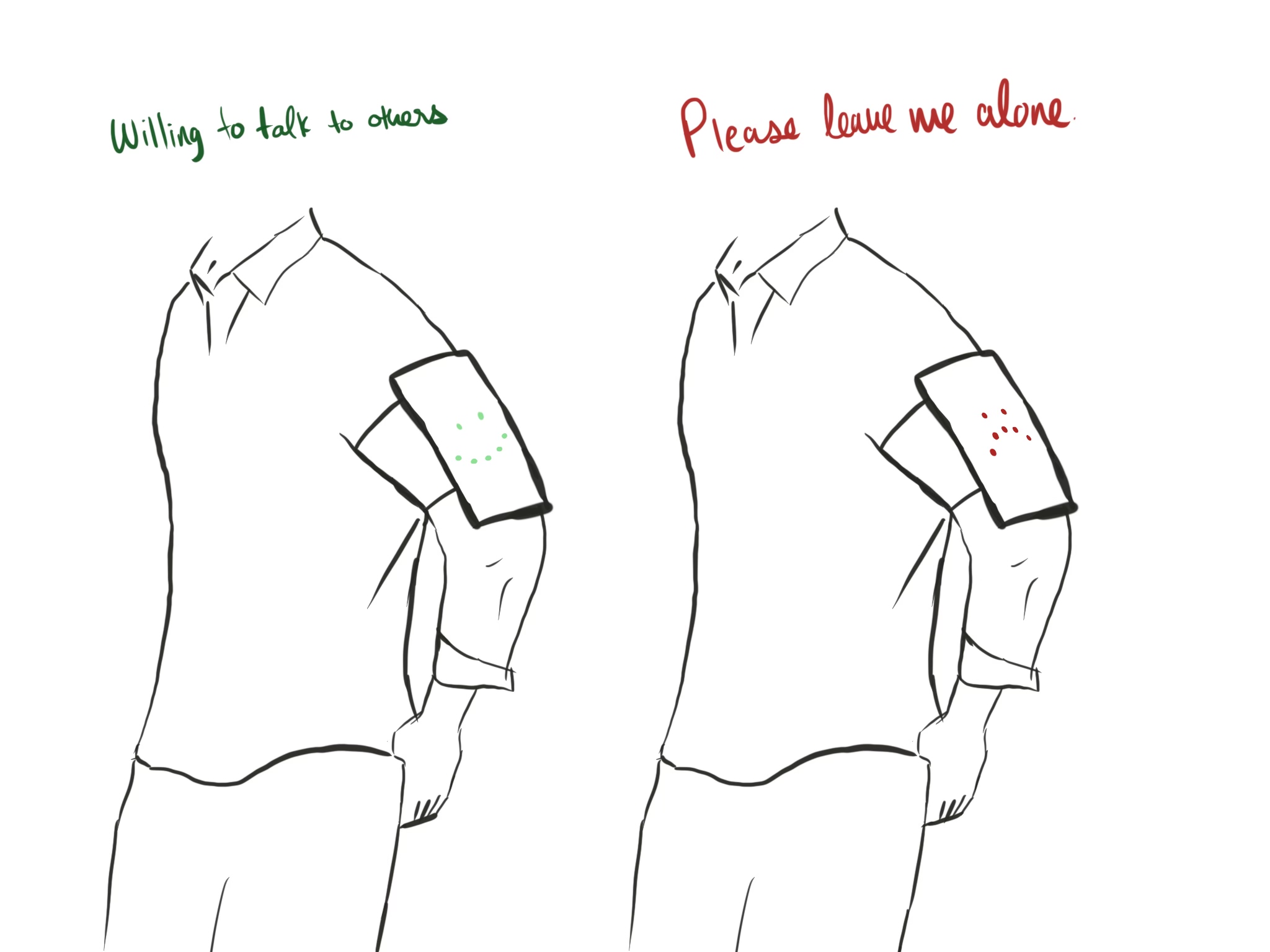 To begin, I used the digital switch that I created when following the digital switch workshop to experiment and find the best way to apply my LED’s for the frowning face. As the circuit is circular I could display the smiling face with just the LEDs on the Playground Express itself, the only additional LEDs I needed were for the red eyes. First, I experimented with a series circuit on an Arduino breadboard so I did not need to sew anything on the fabric. When attempting this I noticed that two LEDs became bright and the others were a lot dimmer. This is pictured below. 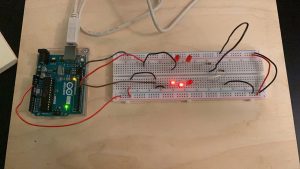 After using the Arduino, I went back to my trialled switch and had sewn a single LED and resistor to the CPX on another pin. As this method worked I decided to attempt a parallel circuit for my lights as parallel circuits evenly distribute the same amount of power to each LED. The full process is shown below, including my sketch of the final circuit and how it turned out. 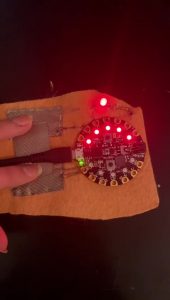 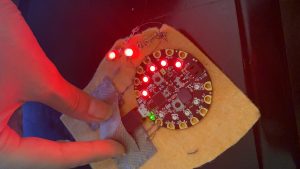 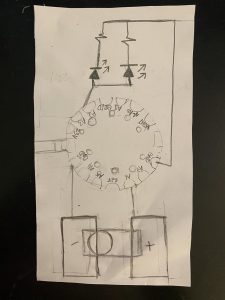 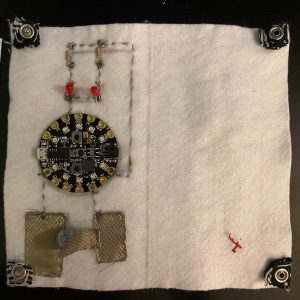 While working on the trial circuit I also started experimenting with the different ways I could encase the code in MakeCode. I trialled using functions with if statements that were called with another if statement, I also attempted using the buttons on the Playground express to control if the smile or frown would be ‘permanent’. With these methods the lights started to blink alternately without any command from the switch so decided to use the if statement with several conditionals to control the lights of the circuit playground express. Along with the if statement I created three basic functions, two of them were to show the face and the last one was to contain the pauses and wipe animations. These functions controlled only which lights were on and no other setting, in doing this it decreased the size of my “forever” function and was easier to maintain. The end result is if the switch is on the right, then the circuit will automatically show the smile and the opposite for when it’s on the left. Some other fun features I added to the lights is that when the digital switch is activated it will first play the colour wipe animation provided in MakeCode that wipes the lights with either blue or grey and then shows the face that is meant to be shown. 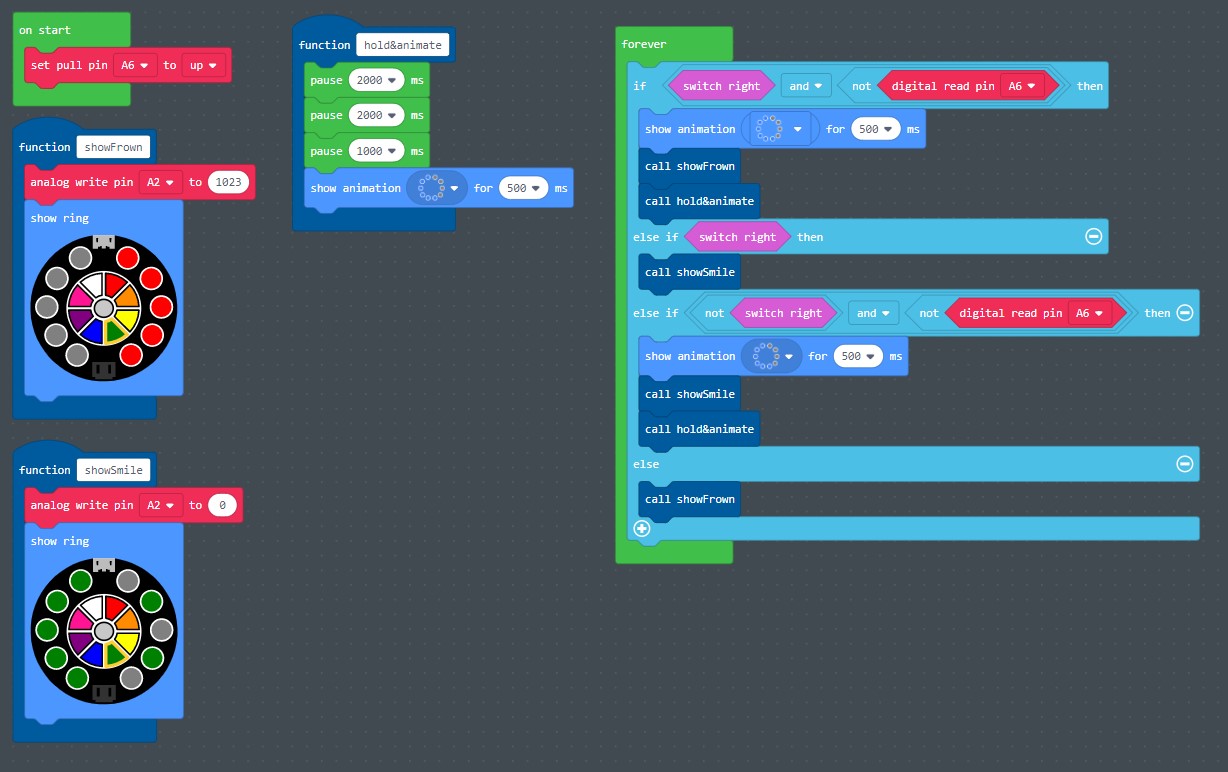 Video demo of wearable being worn!

In high school, I only learned the theoretical parts of circuits and so being able to recall the information that I once learned in the past and to be able to apply it to something I make is a lovely feeling. During this assignment, I realized I spend too much time playing around with the code on MakeCode instead of actually trying to establish a good circuit foundation for the code to run on. I learned how important it is to draft and redraft the circuit design before actually sewing anything down so that it won’t cause any problems later on. In the future, I hope to incorporate the different functionalities of the circuit playground express and also try and see how far I can take a parallel circuit using the board. I would love to experiment and see how many LED’s can the circuit playground take in a parallel circuit.

The only resource that was used within this project was a link to understand the amount of voltage each coloured LED takes as the Circuit Playground Express has an output of only 3.3 V.