The idea or concept for this wearable, is to have it glow when activated manually and is meant for dark spaces. The mood that the wearer will have is either feeling spontaneous (like at a party) or fear/cautiousness at night. The idea was inspired by safety vests that helps drivers see bikers or walkers at night. Safety vests, however, aren’t an ideal choice in fashion, and recently I’ve noticed that head bandanas/scarfs have increased in popularity so I decided to play on that idea. The main purpose of this wearable is to reassure the anxiousness in both drivers and people who need to go out on walks at night. People who go out walking are especially vulnerable and so when they are worried when crossing the road that a car might hit them, they just need to switch the lights on to let others know where they are. 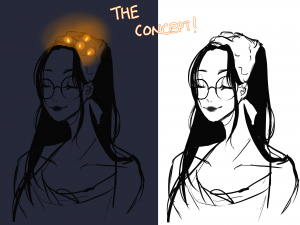 So I began with experimenting how many lightbulbs I could do in series and at first, I couldn’t light up any of my light bulbs at all when I used two LEDs. I realized that it was because my circuit didn’t have enough Volts to have both of them, even without a resistor (the circuit had 3.3V while the blue LED needed 3-3.2V) and I used the orange ones (which I had planned on using for the final product) instead. In the following video, I recorded a video of the lightbulbs and you can see one flashing more obviously than the second one. 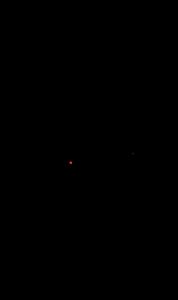 And then I compared it to if I just attach one light bulb instead, which is much brighter and more visible. I had to consider that I would be diffusing it and that this was supposed to be seen from far away, so I decided to attach only one LED. In the video below, the light on the left is the singular LED compared to the one on the right(isn’t very visible), which is from the image above. The green light is just a part of the circuit playground express. 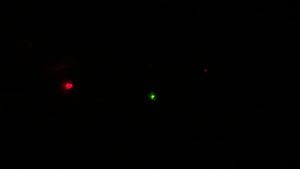 I then planned out my circuit and used crocodile clips to map out the physical one. 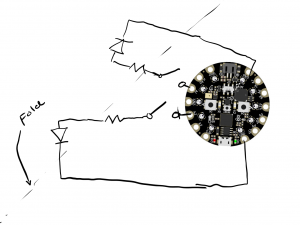 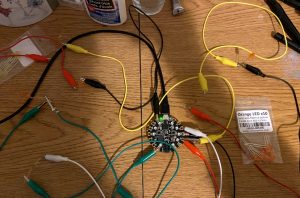 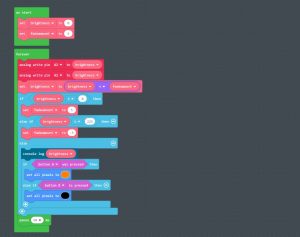 I sewed the switch so that one end was secured onto the fabric and the other is loose. That way the switch is only activated when I fold the scarf and the cloths touch one another. Another thing I did was using the built in buttons (A and B) to activate the Neopixels on the circuit for extra light. Below I attached some photos, I couldn’t upload videos for some reason so I just took some screenshots of the video and uploaded them as photos. 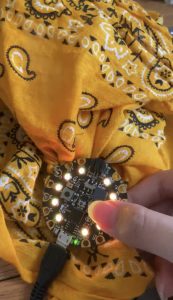 Image of when the switch isn’t activated, Button A isn’t pressed 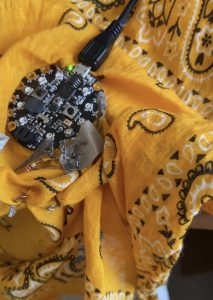 Switch activated (see next photo to see just the LED) 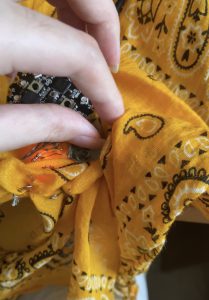 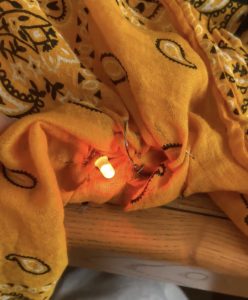 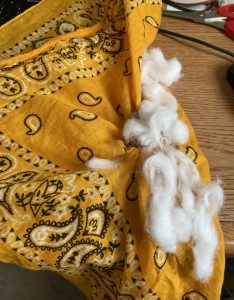 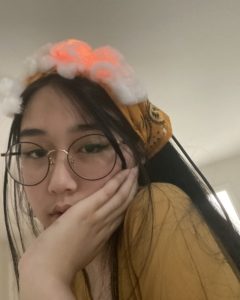 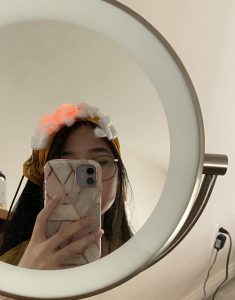 This is actually my first time sewing something. I’ve learnt how to sew six years ago but truth to be told, I don’t remember anything whish is also why my circuit was so messed up and why it didn’t work several times. I think that using LED was a lot harder than it was to use Neopixels and it took me three days to realize that button A and B only worked on the Neopixels and not on external LEDs. I also learned how valuable sketching on the fabric beforehand is and how much I underestimated the distance I needed for each parts. Going forward I would like to incoporate more LEDs and experiment with parallel circuits.