In this final work, I would like to create an interactive way existing in a wearable outfit. I finally made the decision of making an interactive method on a hoodie. I gained inspiration for this object from both the content of the lecture and the patterns on the original hoodie. I was really into the use of capacitive touch, hoping to create something with capacitive touch being applied. Later, I brainstormed and came up with some ideas that I could extend.

My first idea was to create a lighting, adjustable collar. In the middle of the collar, I could design a special pattern, when it connects with the one on the other side of the collar, the circuit will be closed and the collar will light up. I later found that it might be difficult to make a pattern like that because the length of the centre part of the collar will be hard to match perfectly. Then I came up with another idea, which was to use capacitive touch to control the light on the shirt. I will hide the tail of the capacitive touch in my pocket, so, when people place their hands in the pocket, they can control the patterns illuminating on the shirt.

I finally decided to combine the two elements altogether by creating an interactive hoodie using capacitive touch. I decided to make this and there are three main reasons. The first reason is that for the previous assignments, I had explored the strategy by closing a circuit and making the lights up for several times. So, in this assignment, I would like to try something new. The second reason is that the hoodie was a very good medium to perform my concept. I could decorate the hat on the hoodie and hide the capacitive touch inside of the pocket. The third reason is that I see this could be an idea that fulfills all the wearability requirements. It will have a good outlook, easy access to use, and a well-protected structure to avoid the circuit being hurt, and it will be comfortable for people to use and wear.

Material trying out: At the beginning, I tried to explore different materials and fabrics’ degrees of transmittance of light. I made some cute lighting bubbles with a layer of shading fabric, a layer of recycled silk and a space to fill buttons. I decided to insert buttons because I found that it will help to spread lights from the LED inside of the bubble evenly.

Because there are some existing patterns on my hoodie, I later decided to directly put my LEDs inside of the patterns that were already existing. However, I rethought the initial idea of my creation and found that my artwork lacked a theme. I then decided to add something related to fashion in my artwork. 2021 is the cow year in the Chinese traditional calendar, so I decided to add a cow horn on the hat by using the same material so my artwork can resonate with the fashion trend and the culture. 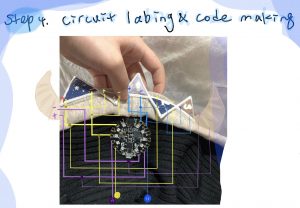 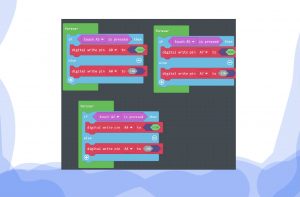 I later designed the circuit of my work and tested the code. I tried to avoid the intersection of the circuit but found it was not possible. 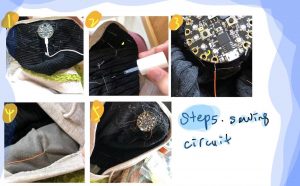 I sew the circuit on the hat. Before I did that, I sewed an extra layer using a sewing machine on the inner side of the hat so I could sew my circuit without influencing the hat’s appearance. I later used nail polish on the conductive thread after I did the circuit sewing. For the capacitive lines, I used a very thin wire as it is covered by insulation material. So even though there are some intersections, the circuit will work perfectly as well. 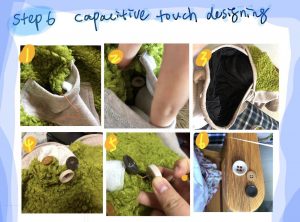 On the capacitive touch side, I sew three buttons on the inner layer of the pocket. I noticed that I should always use the buttons where the centre is sag as that will reduce the possibilities for users to touch the capacitive buttons mistakenly. 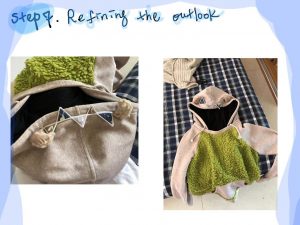 I finally added a third layer in the hat of the hoodie so the outfit will be very clean. 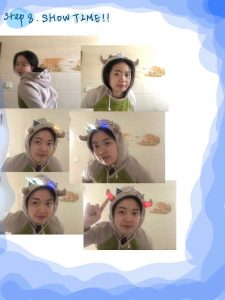