The idea of this wearable is to create a meditation timer. This timer is set for one minute of mindfulness to help the user quiet their mind when they are possibly overwhelmed. When the mindfulness arm band is on the user, the wearable is idle and serves as a fashion piece. However, when wanting to practice a minute of meditation, the bracelet can be taken off which triggers a 6o second timer. For each 10 second interval, a pair of LEDs change colour to signal the passing of time. When the 60 seconds are up, the user is met with a rainbow animation and peaceful melody to alert the one minute has been completed.

I know personally, nearing the end of this semester, I suffered tremendously with my personal mental health and found that incorporating just one minute of meditation helped me relax and listen to what my body needed most; rest. “Have you ever wanted your mind to leave you alone? Try this. Set a timer for 60 seconds, close your eyes and focus on your breathing. If you notice yourself getting distracted, simply return your attention to the rise and fall of your chest as you breathe. That’s it. Seriously, try it (Whitaker, 2017).”

I first started sketching the circuit for my wearable. At first, I was going to use the CPX’s built in switch, however decided to include an external switch for better wearability. 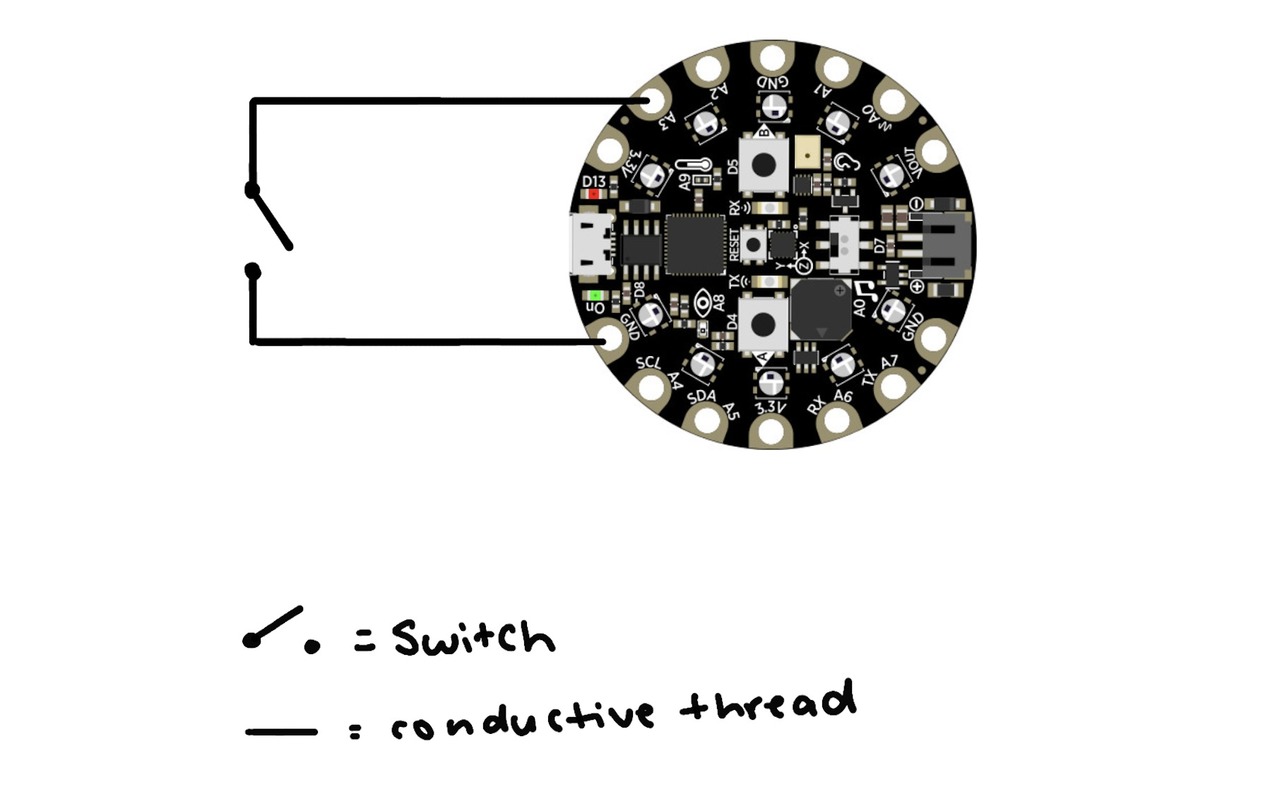 I then started to test my circuit’s functionality using the CPX and alligator clips.  I attached a metal snap to the positive alligator clip and the other to the negative alligator clip to ensure the same result would be reflected when sewing the snaps onto the armband. I created and edited my code based off a Handwashing Timer Code and a 10 Second Timer Code found on Adafruit’s Blog. 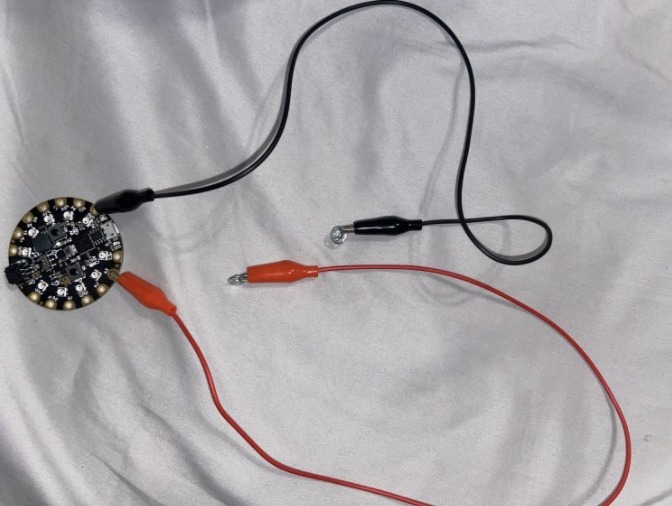 Link To My MakeCode File

After ensuring the circuit was functioning with the alligator clips, I began creating the arm band from scrap felt I had lying around the house. I measured the dimensions of my wrist size onto black felt and cut three horizontal strips. I then decided on the width of my armband and cut multiple purple felt strips to create the weave pattern. After the foundation of the weave was laid out, I cut off the excess and hot glued the strips in place. I then proceeded to attach the CPX to the armband with non-conductive thread (embroidery thread). Next, I sewed the circuit with conductive thread connecting to the GND and A5 Pin and attached a metal clasp to each end. 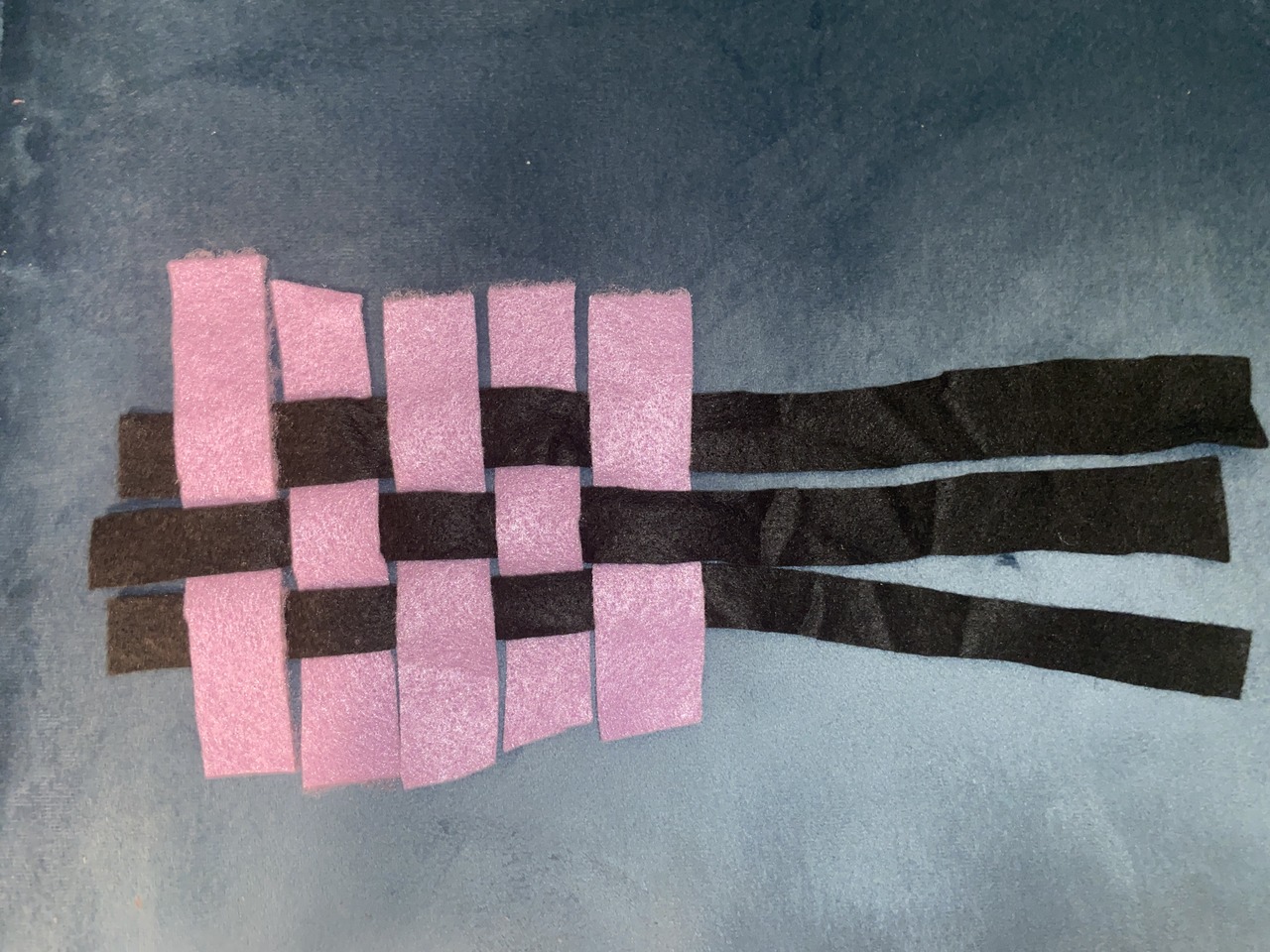 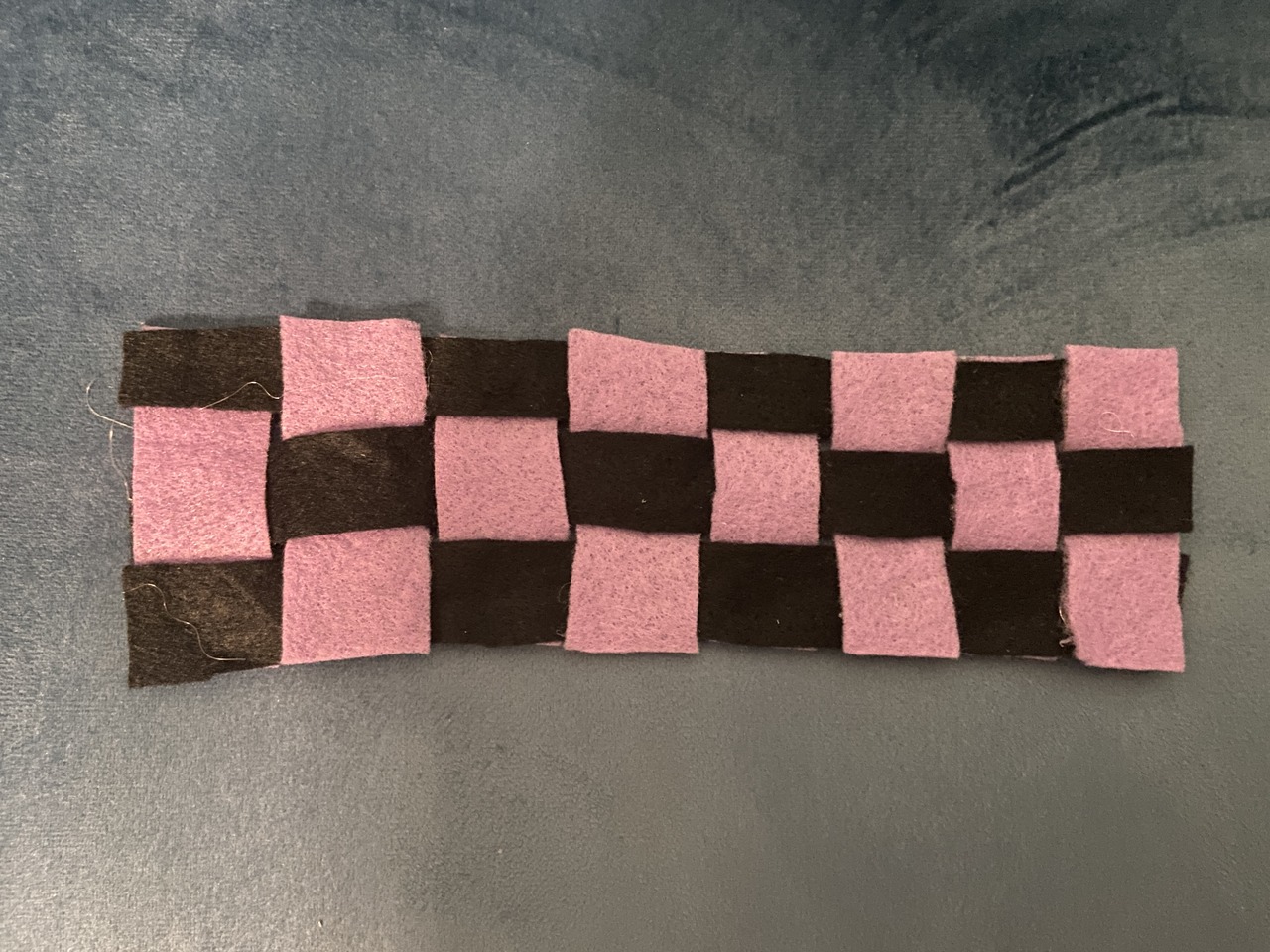 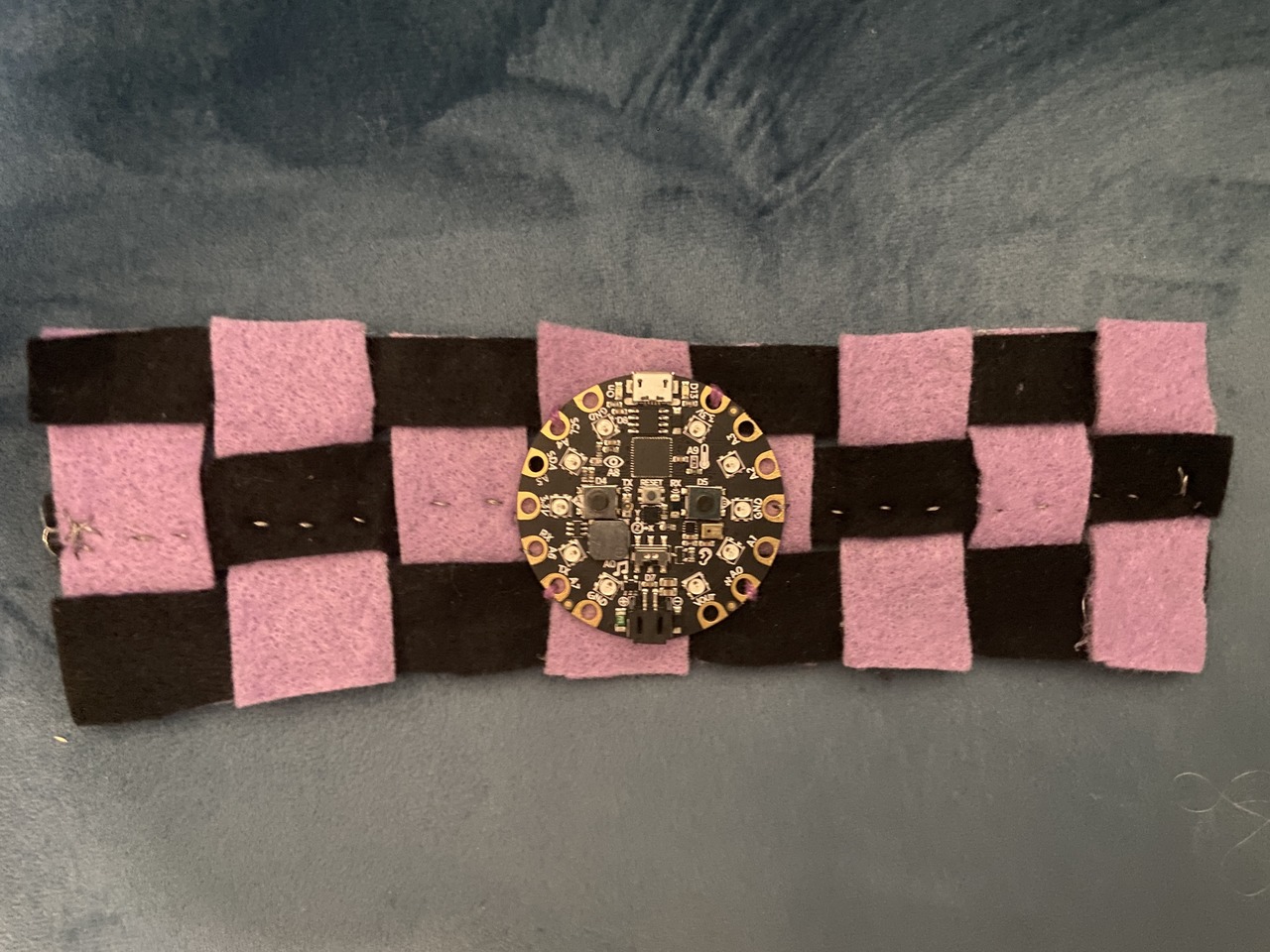 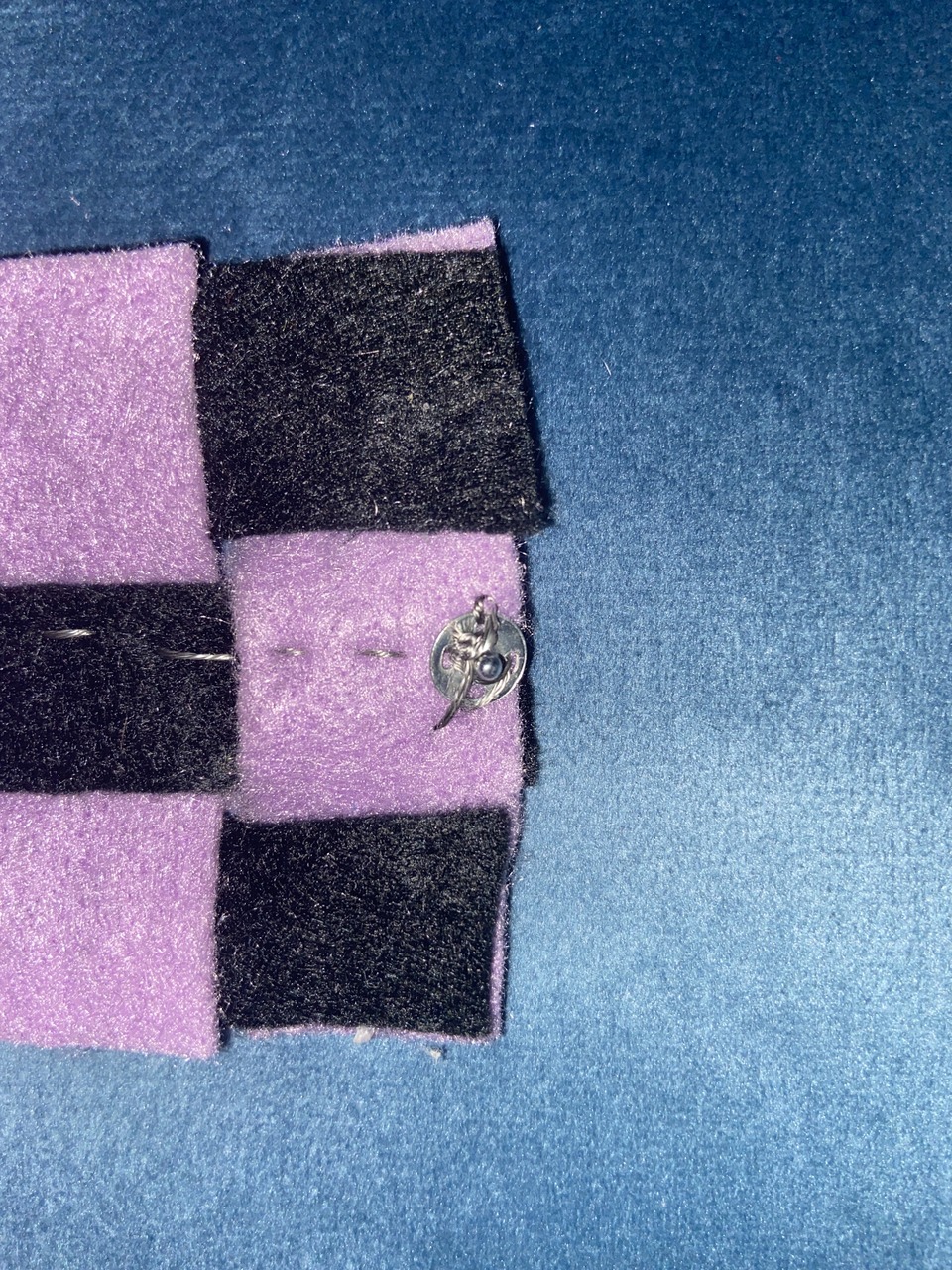 The final step of completing the wearable was sewing on the white circle of felt to diffuse the LEDs and add some decorative elements. I decided to add a lotus which represents strength and hope. Afterwards, I plugged in my CPX to ensure the circuit and code were still functioning. Luckily enough, I experienced no issues on the first try! 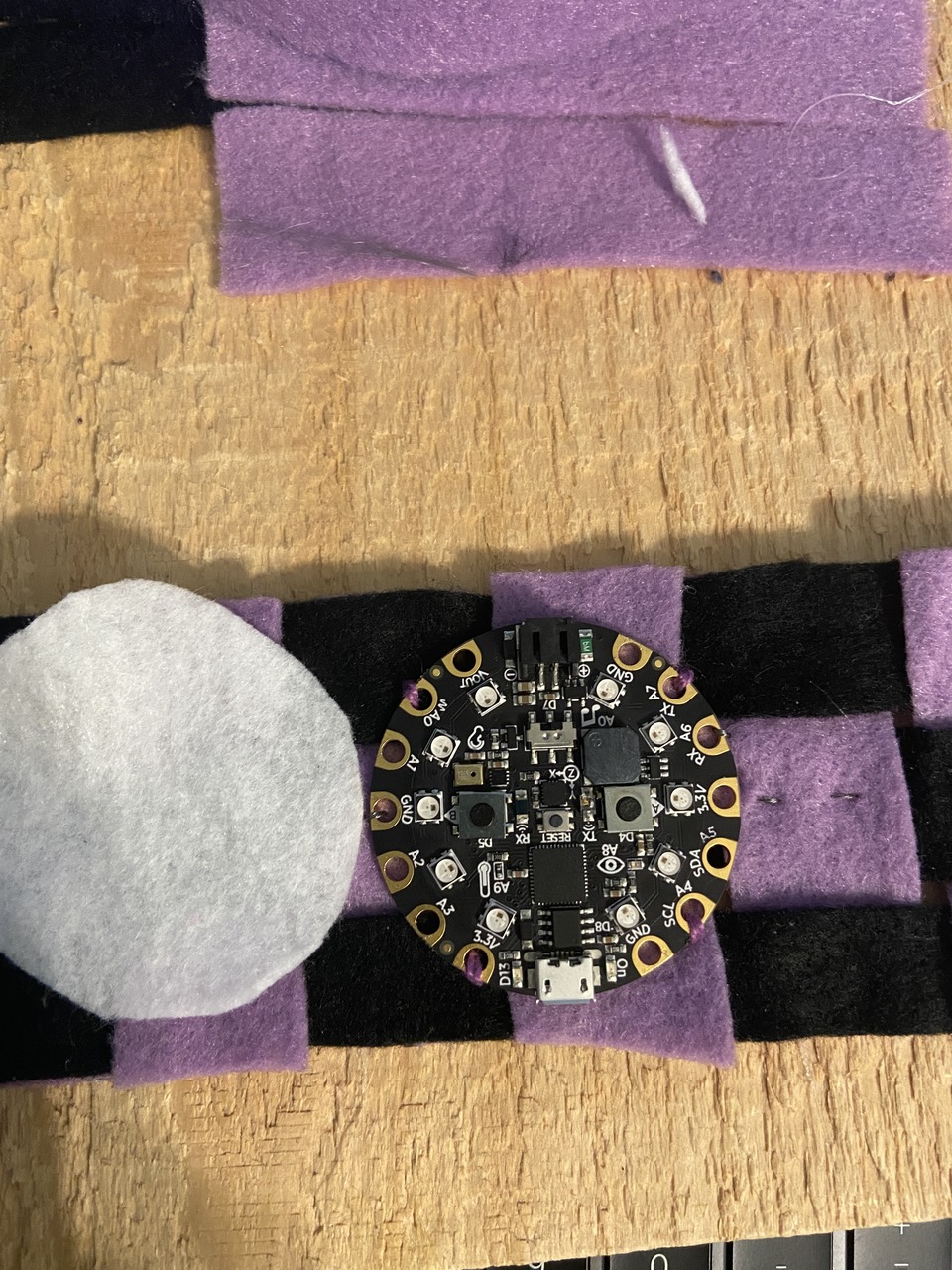 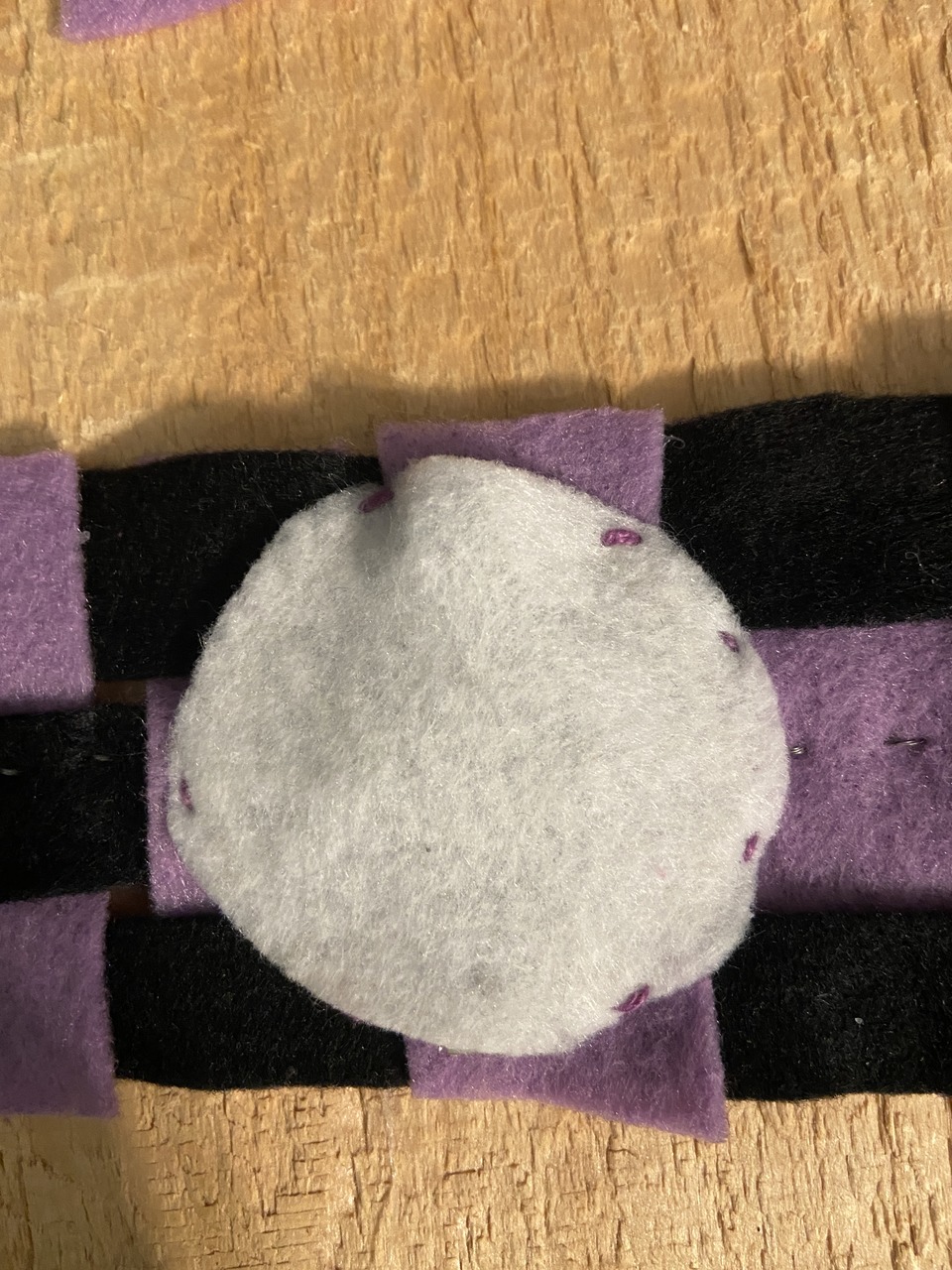 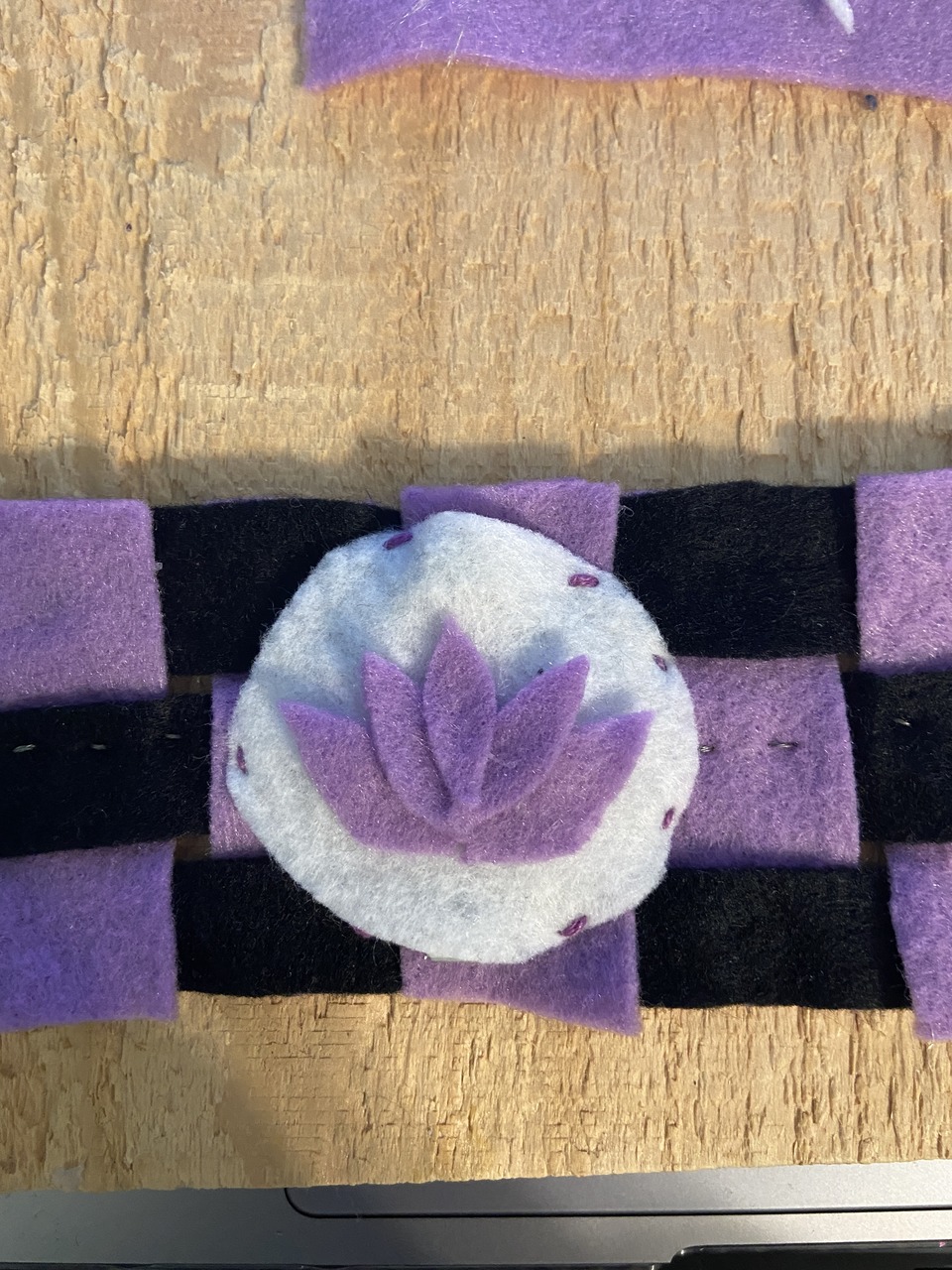 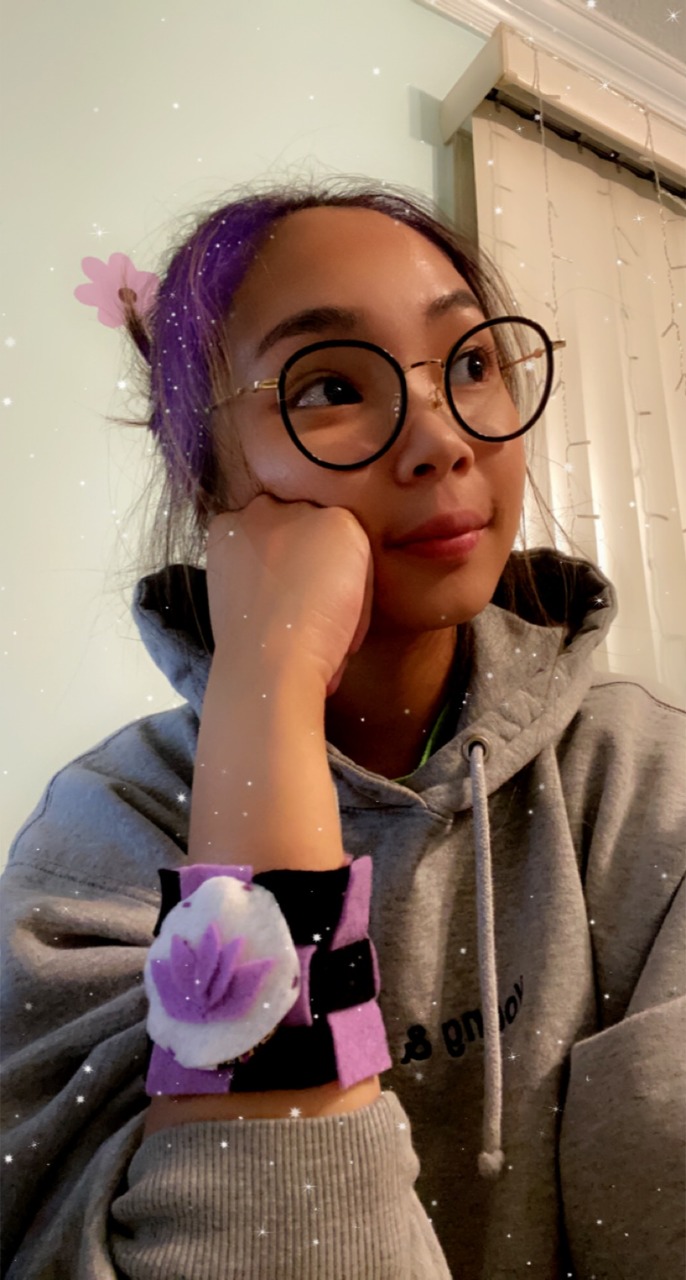 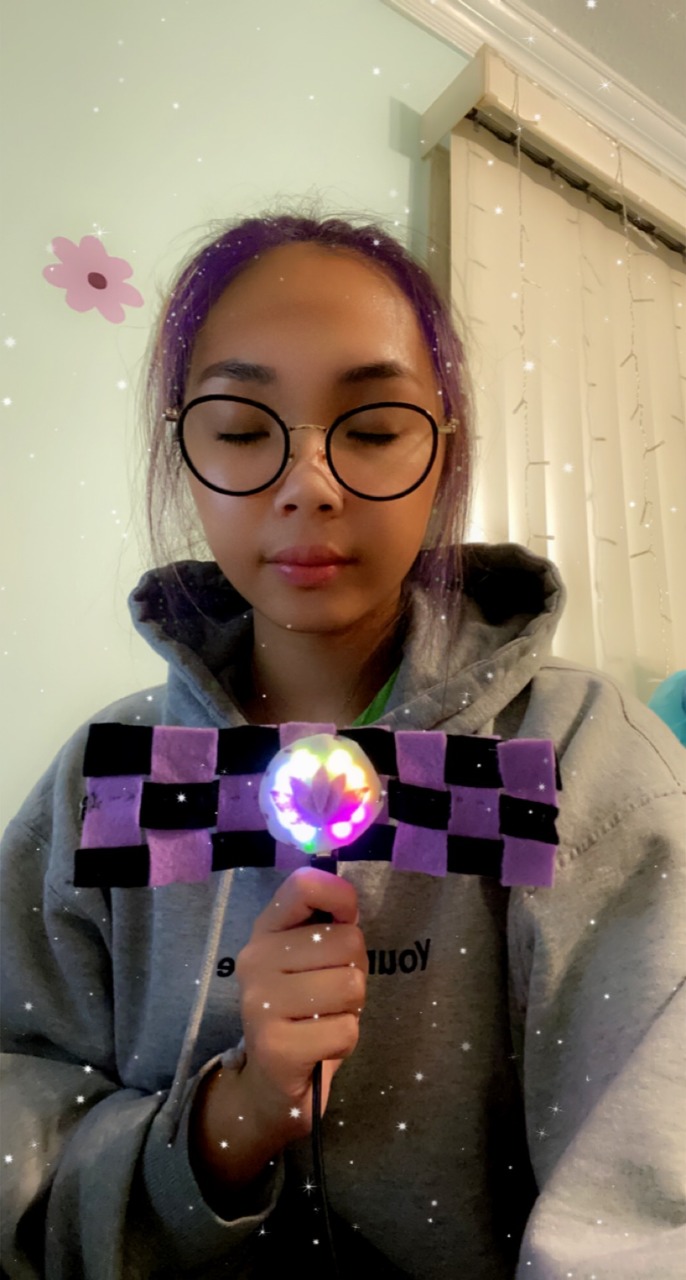 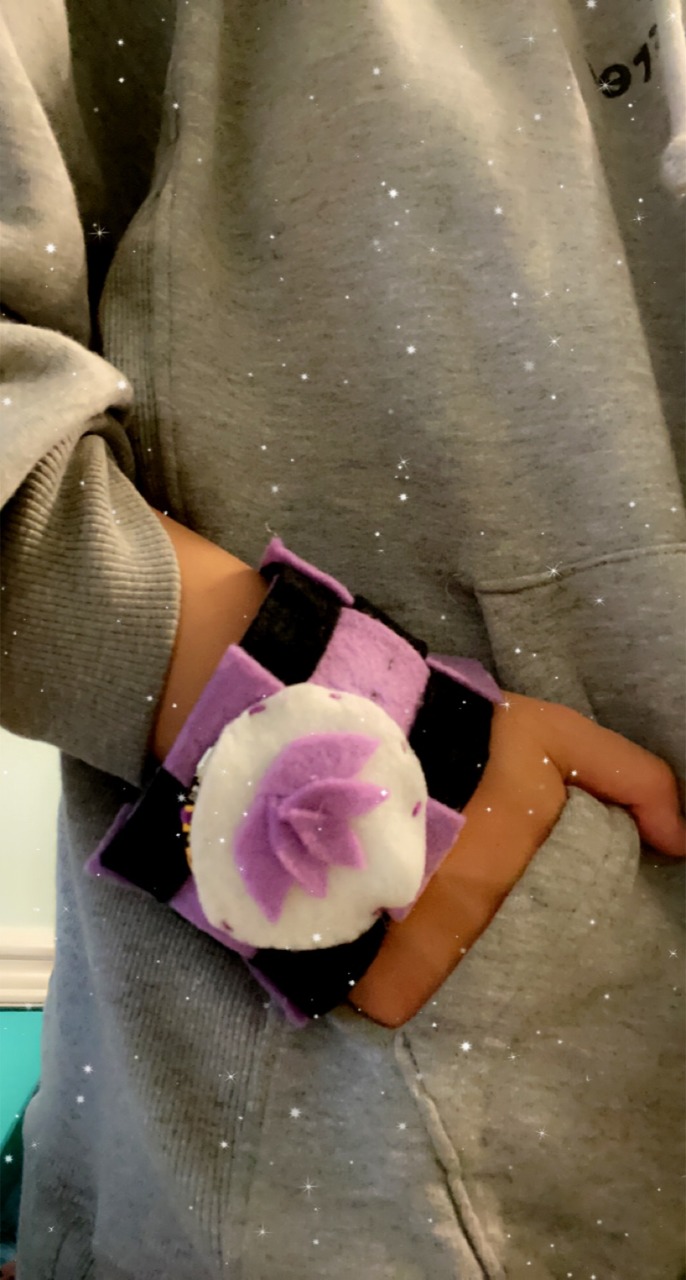 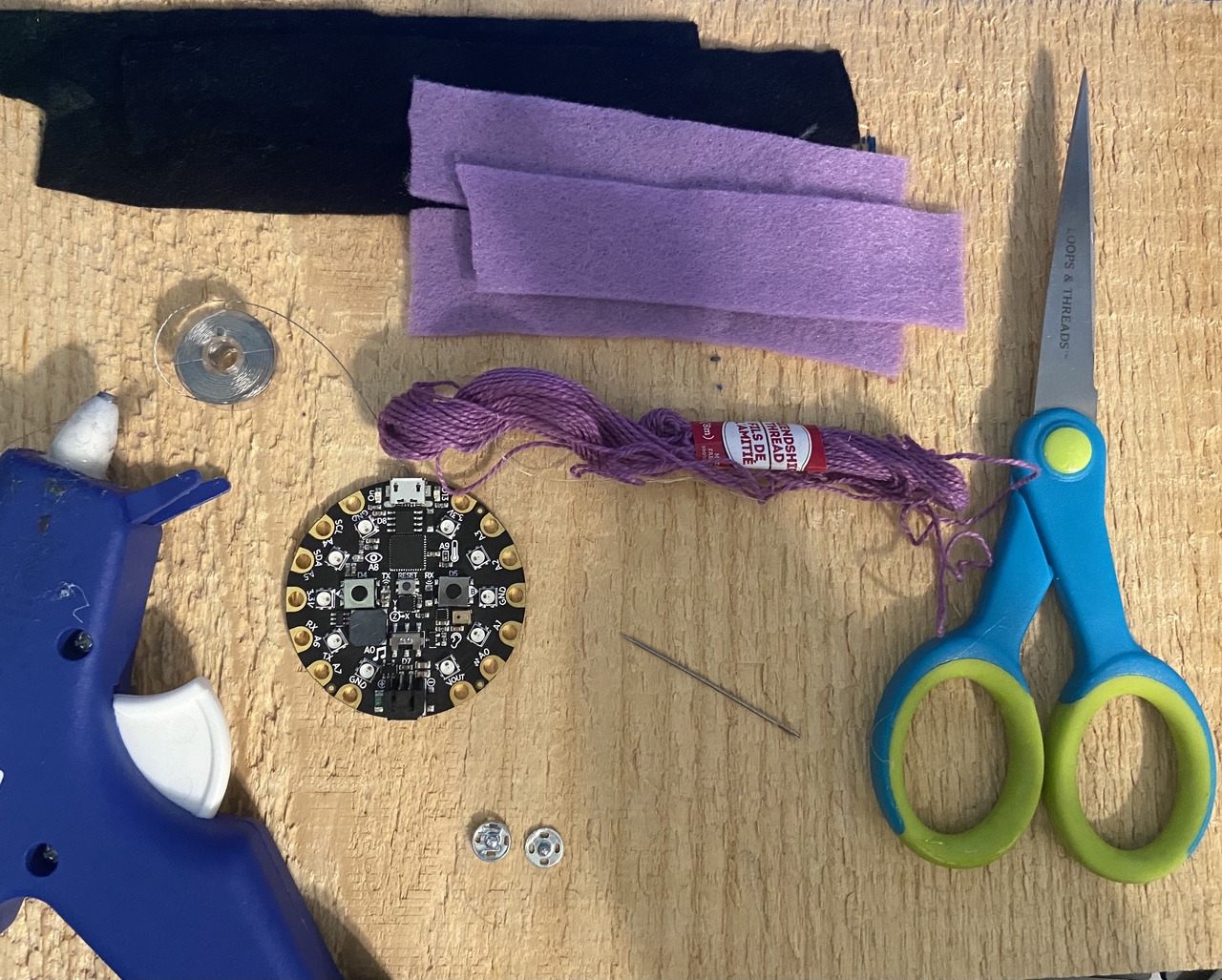 Overall, I am very proud of myself for creating this wearable! I liked how I created a product that I would integrate into my everyday life and even has a pretty aesthetic to encourage consistent use. From the last wearable I created, I achieved my goal and improved on the stitching of my conductive thread. This time the sewing was clean and tight to prevent any short circuiting. This project was a mix of both my expressive wearable and skill sharing workshop. I took the idea of the timer from the handwashing timer and then implemented the metal snap switch from my expressive wearable tote bag! I learned how to successfully build a timer in MakeCode while adding additional elements like melody and animation! In the future, I would be interested in purchasing a battery pack instead of plugging the adapter into my laptop for easier usage.

The idea for this wearable is to create a bag to prevent theft and give the wearer peace of mind when walking about in street.  When the straps of the bag are pulled apart by a thief, the bag begins to flash red lights and a loud siren begins to alarm. This wearable is meant to express the emotion of fear as it is common for one to be anxious when carrying around large amounts of money or important valuables. This wearable is inspired by a recent event that took place in San Jose, California. “According to KTVU, a 64-year-old grandmother had left the bank with more than $1,000 in cash for Lunar New Year. As she got in her car parked at a Vietnamese market, another car came and blocked her way. The suspects opened the door to her car, grabbed her purse and fled (Smith, 2021).” There has been a spike in Anti-Asian hate crimes targeting older Asians in the news recently, and it truly hits home to me as I fear for my own family’s safety at times. This theft prevention tote is made to help these citizens especially around Lunar New Year and bring attention to the victim to prevent the robbery from proceeding. 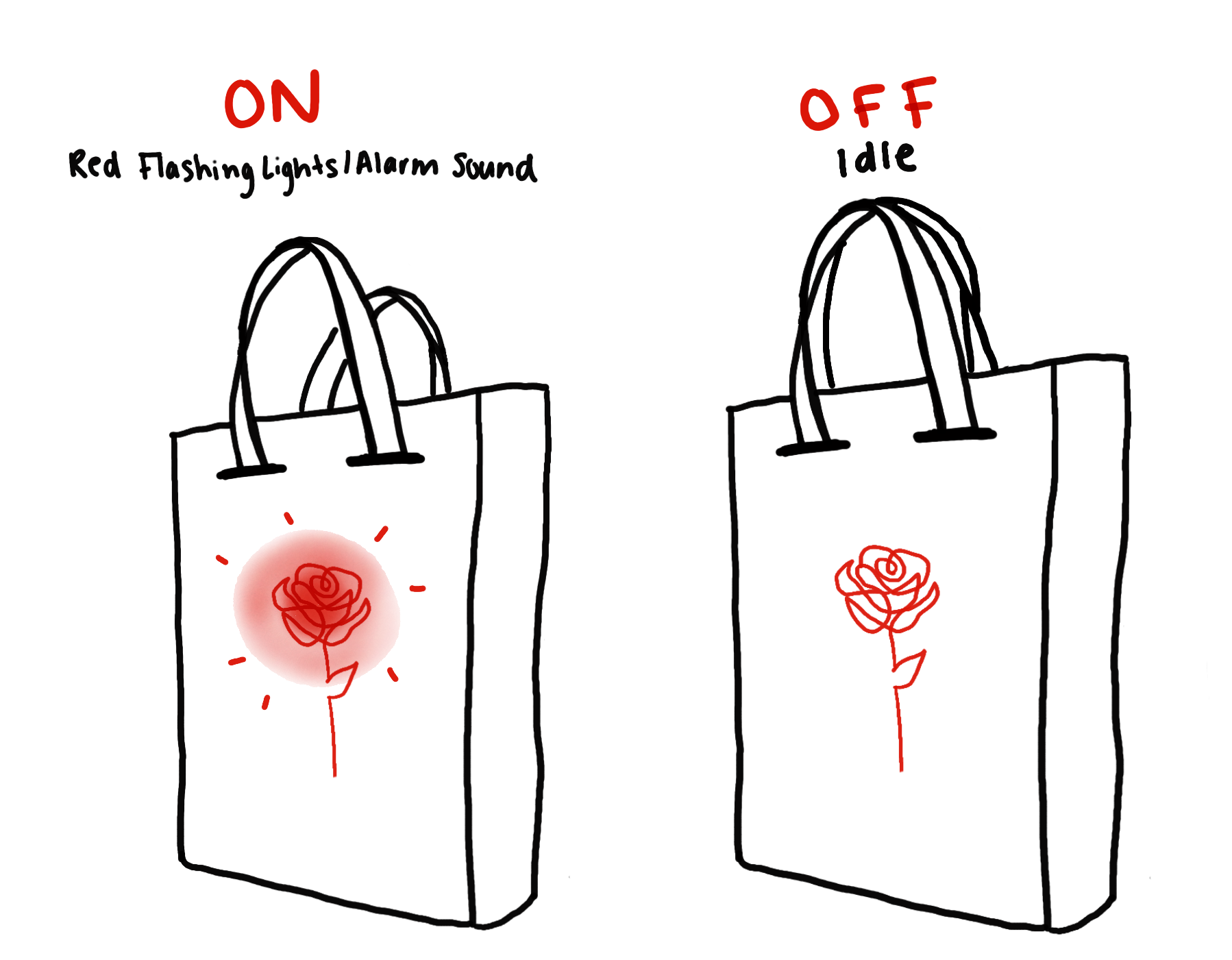 I first started sketching the circuit for my wearable. At first, I was going to add an LED to my circuit, but I decided that for the function, adding a small LED would not create any additional impact on the bag’s overall red glow. 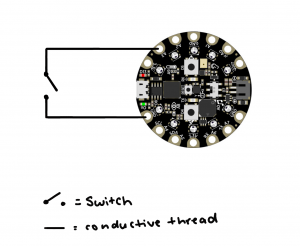 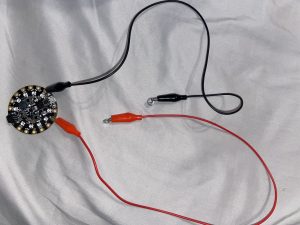 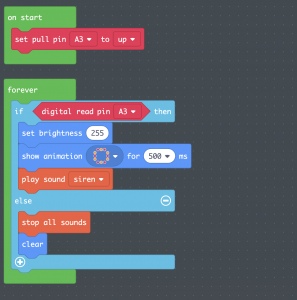 After ensuring the circuit was functioning with the alligator clips, I began creating the tote bag from scrap fabric I had lying around the house. I measured the dimensions of the tote onto pink fleece and created the base of the bag. I then created straps using a raspberry coloured fabric to create the practical tote bag. 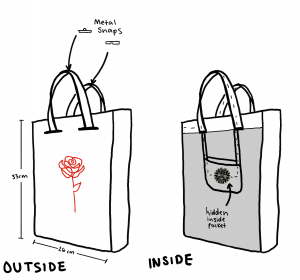 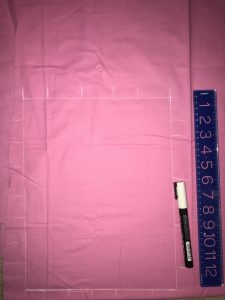 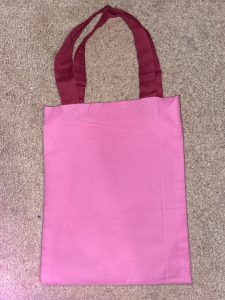 After the tote bag was constructed, I began to sew my CPX onto a white piece of felt and started sewing my circuit using the conductive thread. I ensured that a clasp was connected in series to either A3 or GND. I then powered the CPX with a power bank to ensure the circuit was still functioning! 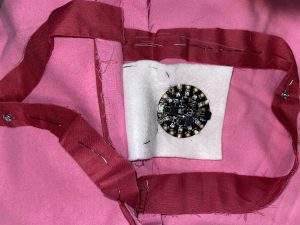 The final step was adding decorative elements like the trim around the bag with the excess raspberry fabric. I also sketched out an outline of a rose on a panel and added the hand embroidered element to the front. I made sure to position the head of the flower in front of the CPX to diffuse the light to give the illusion of a glowing rose. The prototype is now finished and ready to perform! 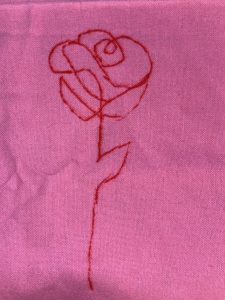 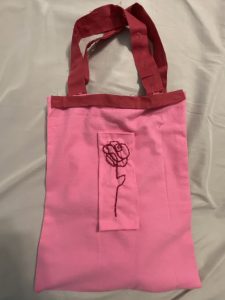 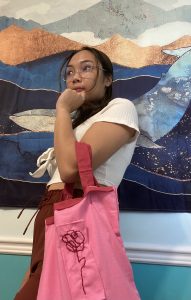 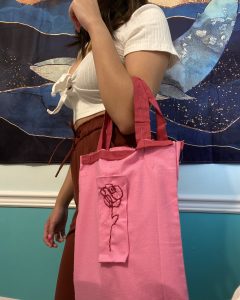 *IN ACT OF ROBBERY* 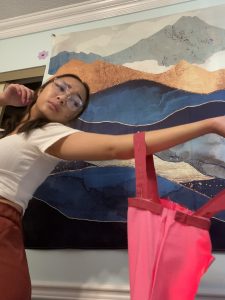 Overall, I am pretty proud of myself that I was able to create a functioning wearable! I like the overall aesthetic of it and everything that I had planned to do ended up following through. If I were to revisit this project, I would want to improve the stitching of my conductive thread. It was a little loose at some points which could impact the circuit at some point. This project helped me solidify my understanding of switches and how to properly program a “reverse” switch. I learned the functionality of the If/else block code and how this changes the circuit from closed to open. Additionally, I learned how valuable just 15 minutes of office hours truly is! In the future, I would hope to add additional LEDs to challenge myself further.

The “Emerald of Emotions” is a necklace designed for the dating scene of the 21st century. Dating apps like Tinder, Bumble, Hinger, and Grinder can become exhausting when date-after-date goes wrong. This product allows easy communication between two people to avoid those awkward chats. The “Emerald of Emotions” senses the human heart rate and temperature after a date has been completed. A high heart rate and hot body temperature corresponds with a positive experience, while an average heart rate and average body temperature indicates a missing spark. Instead of having the, “no I would not like to see you again” conversation, it is simply avoided with the glow of LED lights through an elegant emerald.

The emerald has a built-in heart rate monitor and thermometer that is recorded in our corresponding app. The two levels are careful monitored allowing ranges to fit in specific colours. Red means that the individual enjoyed themselves during the date and would like to see their partner again Orange means that the date was just okay and that they could revisit the possibility of a second date. Grey means the date was unpleasant and the individual would not like to see their date again. Our app allows users to turn this necklace on and off via their mobile device, allowing for casual wear as well.

The objective of this jewelry piece is to speed up the process of finding your one true match! Going on second dates with people that you were never compatible with is a waste of time. Your true feelings will be revealed even if you’re too timid to say it with your own words.

This product has a timeless look of a classic diamond necklace, allowing versatility and subtleness of the wearer. The target market is primary users of dating apps or speed-dating (Millennials and Gen Z). 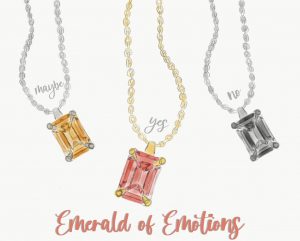 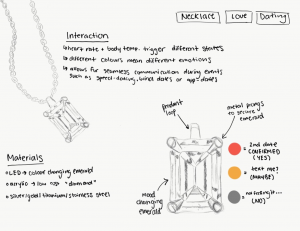 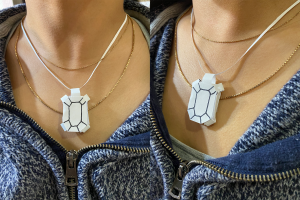