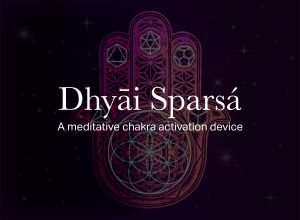 Dhyāi Sparsá is an immersive meditative device that is worn as a glove on the hand. The glove has vibrating points embedded on the chakra points on the palm, that help in the chakra meditation process.

Chakra based meditation is an age-old Indian tradition, which helps to soothe the mind, increase productivity, and has multiple other benefits. Traditionally located along the spine towards the brain, chakras are present in different parts of our body like our palms, feet, joints etc. Each point has its own benefits and is signified with a colour, form and raaga (sound tone).

This project is an extension of the Dhyai Drishti, which was a touch based Chakra meditative experience, using visuals and sound. The project was created during our Creation And Computation course, by Kate Hartman and Nick Puckett, in our first semester at OCAD. 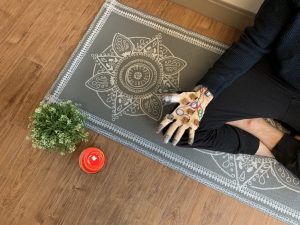 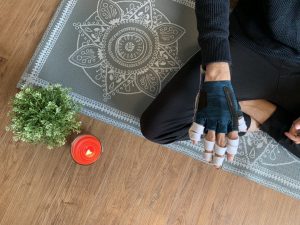 This project was inspired by several haptic and sensory driven meditation aid products. We have listed some of the most important references below.

Healy is a frequency based unique healing device that aids in holistic solution to pain, sleeplessness, anxiety and helps in creating an atmosphere of positivity and mindfulness. It is attached to the body with clips, that help distribute the frequencies to the wearer, aiding them in numerous ways.

Nadi X yoga pants is yoga pant created with woven technology which makes it easier for users to practice yoga alone. The yoga pants are wirelessly connected to the user’s smartphone and enables them to correct their posture if they do go wrong.

While developing our project we, developed a version that has an LED matrix embedded on the top of the hand to visually indicate, others which Chakra the user is meditating on. The LED matrix changed pattern according to the symbol of the activated chakra. However, after further contemplation and discussion on the same, we decided, that meditation being a personal activity, we would not want to broadcast, the chakra to others, than the actual wearer, and hence removed it from ur final prototype. However, coding the LED matrix was an interesting experience. Below, are two code, one with and one without the matrix. 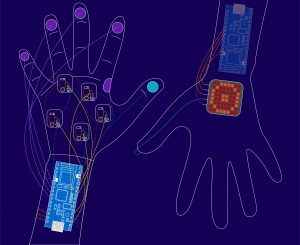 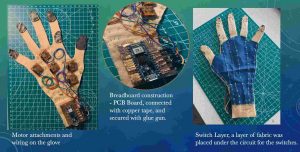 We would like to create a bodysuit which would be wirelessly driven, and vibrations triggered by hand mudras will be vibrated across different points on the body, to help in meditation process. 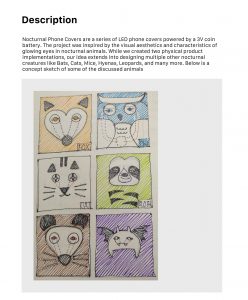 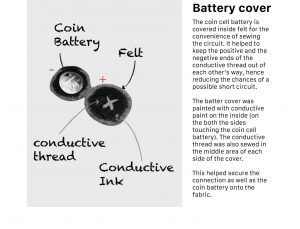 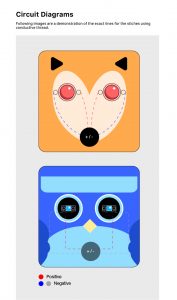 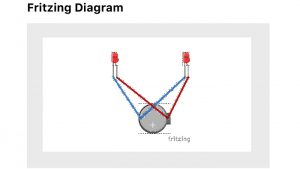 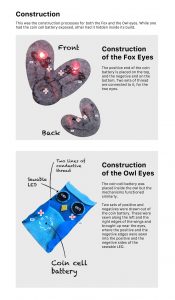 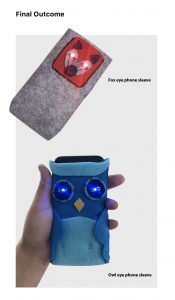 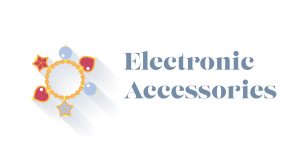 Description – LED coin purse is an electronic accessory that reminds the user to close / button the purse once they keep the coin inside. The coin purse has a small LED attached on one side, which lights whenever the purse is opened. This brings the user’s attention to close their coin purse before coins / money is misplaced.

Discussion – I would like to make a larger version of this bag with more LEDs that light up once it is opened, reminding the user to close it. Also, I would like to embed the circuit inside the purse so that the breadboard and Arduino is not out in the open. This reduces the aesthetics and usability of the bag.

Process and functioning – The bag has a copper taped button hole along with an aluminium button. Both of them are connect to the digital and ground pins respectively.The functioning is controlled by an Arduino Nano 33 iot. Once the button is attached to the button hole, the circuit is closed, this turns OFF the LED. 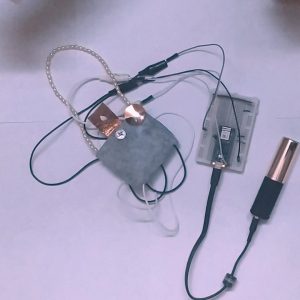 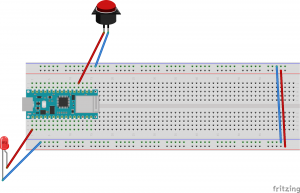 Description – The Pulsing brooch is a wearable LED jewellery that is supposed to be worn on the shirt, blouse or any upper torso garment. The heart brooch has a unique capability of Pulsating once the area around it is touched by the wearer. This gesture is to convey the emotions of ‘Love’ or ‘Gratitude’ by the wearer. Since, we are socially distancing during the Pandemic, this jewellery can help create better interpersonal relationship between the wearer and their audience. This brooch is created with the help of an LED Matrix. The normal mode for the brooch is a LED heart display, on touching the area surrounding it, the LED heart patterns begins pulsating.

Discussion –  The prototype is to be improved further so as to create a more sleek brooch, which can come in different shapes, not simply an led matrix. I would also like to introduce other emoticons or icons to convey other emotions, triggered by different actions. I also want to place the push button onto the brooch, instead of putting it on the underside of the shirt (which was placed for the convenience of display).

Process and functioning – The brooch has two parts which are an led matrix and a push button. The push button, when turned ON, activates a pulsating pattern on the heart in the LED Matrix. The functioning is controlled by an Arduino Nano 33 iot. Below is an open demonstration of the circuit. 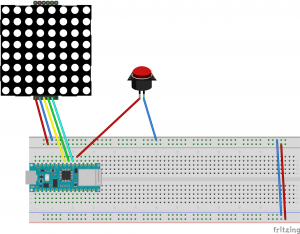 Description – This bracelet is an electronic wearable designed to change colour once it is secured on the user’s wrist. The colour values keep changing randomly at a regulated time interval, when the magnetic button is secured in place. On opening the button, however, the colour change pauses at the very last tone. The button attachment completes the circuit, hence it is like a digital button that initiates the colour changing functionality.

Discussion – I was inspired by pearly bracelets to create this piece, and would like to improve the aesthetics further by adding pearl beading on each led point. I was also confused about how to switch off the LED strip completely once the button was taken apart. Let me know if you know a code that could help me turn off the LED, when the digital button circuit is open.

Process and functioning – The LED Colour Transpose Bracelets have an two magnetic buttons placed on two ends of the bracelet along with the LED strip placed between them. The LED strip consisted of individually addressable 5V lights that were directly connected to the Arduino Nano 33 iot. The buttons were connected from- digital and ground. When they were connected, the circuit was closed and the LED strip was programmed to change into random colours at regular selected intervals. 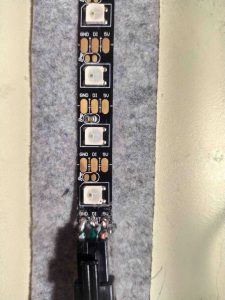 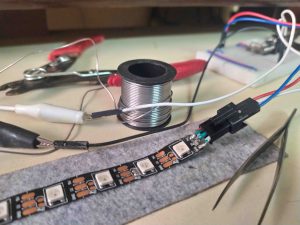 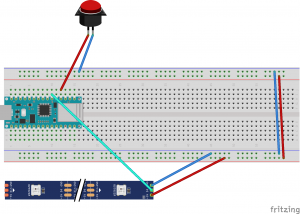 Traffic Control is a very necessary but difficult job, especially due to the harsh weather conditions, anywhere in the world. Lack of integrated lighting systems and heavy gears add on to the professional hazard for traffic controllers everyday. While reflective clothing is very effective in such circumstances, an additional lighting mechanism could improve their signalling and visibility to vehicles on the road. Designing an integrated wrist accessory for easy traffic control was the initial concept behind conceiving this project.

The wearable is a simple wristband with 2 finger attachments. The wristband holds the LEDs, which can change patterns depending upon the signal the controller wants to display. Currently, the wearer can only display 2 signals – ‘Blink’ (Stop) and ‘Direction’. The device has an auto turn on/off. It functions only in the absence of sunlight, hence conserving energy.

The device runs on Arduino Nano 33 iot. A touch sensor and photo resistor are also added to the circuit. The touch sensor help detect the wearer’s haptics, and change the lighting patterns accordingly. The photo resistor which sits right on top of the wristband, helps detect the sunlight, allowing the device to turn on/off without any physical stimuli.

While the idea was to design a product which could be extremely lightweight and sleek, integrating well with the wearer’s uniform, currently the primary prototype is bulky and wired. More research and development will be required to make a more compact version of the device so that it could be easily worn everyday. 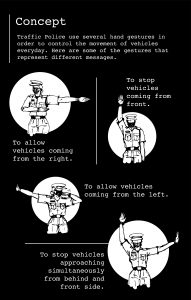 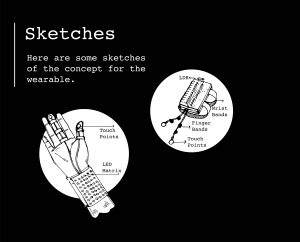 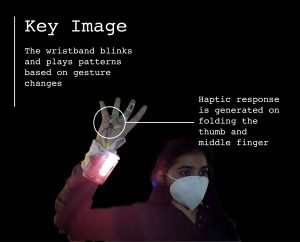 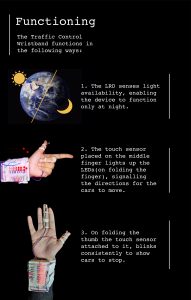 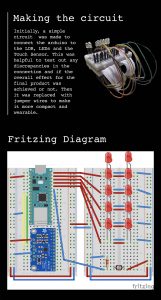 The primary idea behind the project came from a small road trip to the outskirts of my city. While travelling back home, at night, the traffic controllers  in the crossings wielded red and green traffic control batons. Hence, I thought of integrating the lights onto the arm through a small LED lit wristband that would not involve holding an added accessory for long hours.

After coming up with an initial concept I decided to do some research on wrist wearables so that I could find some inspirations to carry out my project.

The first project that seemed very interesting was ‘FingerTrack’. It was developed by researchers from Cornell and the University of Wisconsin, Madison. They designed a wrist-mounted device that continuously tracks the entire human hand in 3D. The bracelet, called FingerTrak, can sense and translate the many positions of the human hand, including 20 finger joint positions, using three or four miniature, low-resolution thermal cameras that read contours on the wrist. The researchers added that the device could be used in sign language translation, virtual reality, mobile health, human-robot interaction and other areas. I find that the finger tracking technology could be really useful for my idea of developing the ‘Traffic Control Wristband’ without the use of touch sensors.

A project with a really interesting aesthetic appeal is the MICA. Developed by Intel, MICA has transitioned from the very androgynous aesthetic of ‘Fitbits’ and ‘Apple Watches’ to that of a High Fashion ‘feminine jewellery’.

Another example of a brilliant project with a little problematic aesthetic is ‘Guardian Angel’. This necklace has been designed by the agency – JWT Singapore. The concept for this product is very interesting and useful. A single click on the jewellery automatically triggers a call to a woman’s cell phone, so she has a convenient excuse to walk away from unwanted attention at public places. If things change from annoying to dangerous, holding down the button sends an emergency message to a friend with the victim’s exact GPS coordinates. Now, although usefulness of the device is no doubt really well thought out, the aesthetics of the jewellery makes it look like a silver insect. Also, there are mobile apps that enable the user to do fake calls to excuse themselves out of problematic situations. 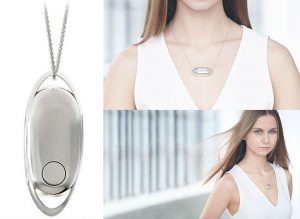 I look forward to work further on this device and develop it into a more compact and user friendly wearable. 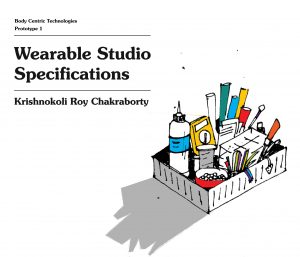 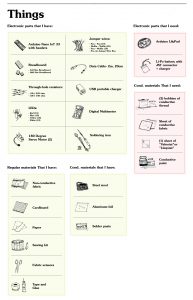 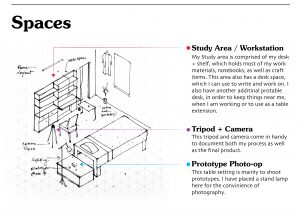 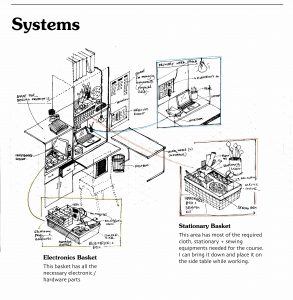