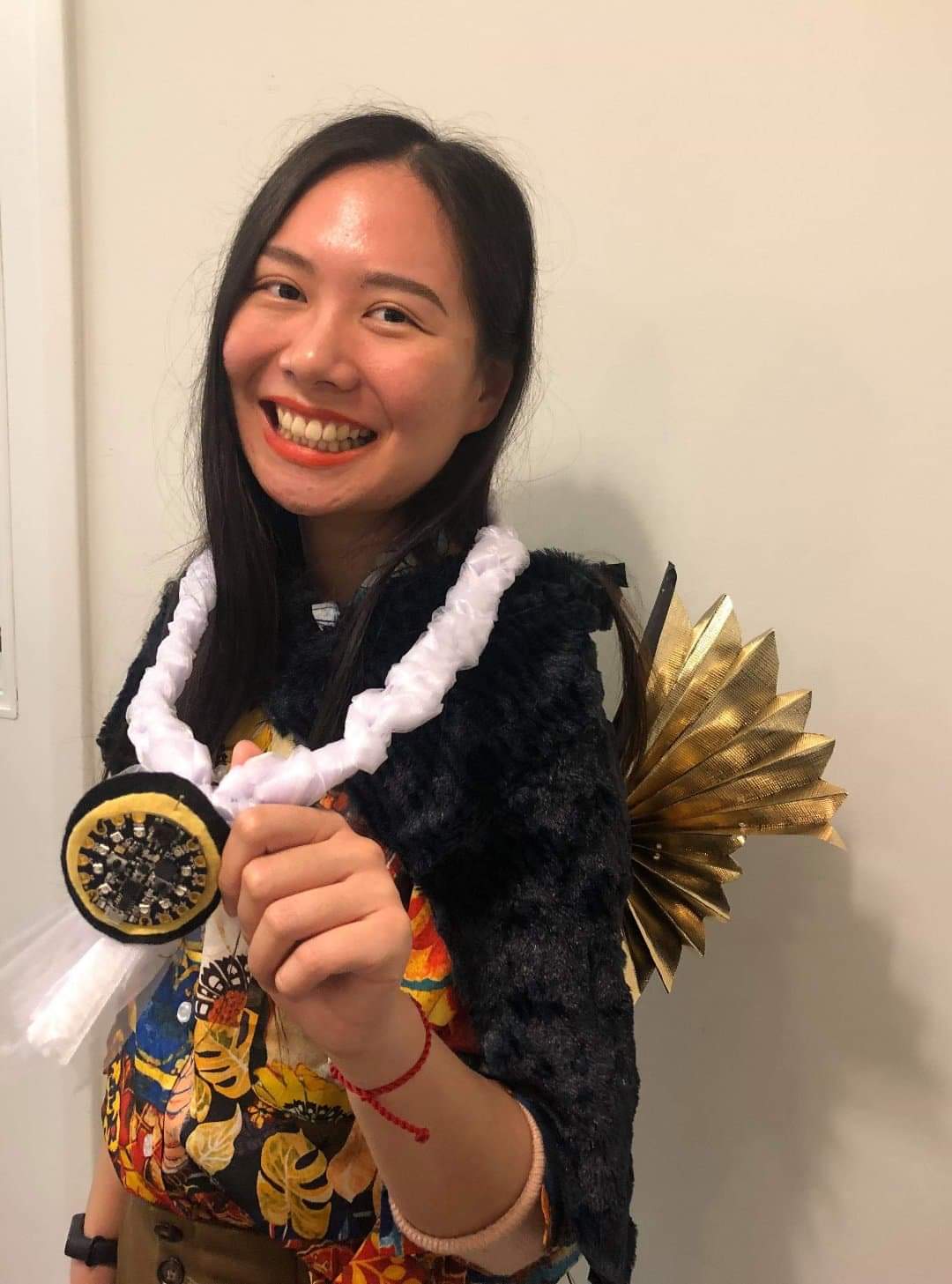 This is a kinetic art installation which emotes the feeling of elevation with pride.  This indulges in an extended non-verbal communication from the user to his surroundings. Three capacitive touchpads and a do-it-yourself switch are coded to activate the NeoPixels and wings respectively. This project is a surreal mix of fantasy and feelings in terms of the forms, it has been constructed upon. The golden wings represent ‘a feeling of flight’ (ambitious), the braided garland with the Adafruit Playground circuit framed with a golden fabric is created to resemble a medal to convey the idea of someone who flies on the Cloud 9, proud of his/her achievements, snobbish and has a sense of superiority complex. The DIY switch (Golden Steel wool) can be used to pause the wings which function via two servo motors attached on the back. The three capacitive touchpads are coded in rising levels of intensities, in terms of audio and light emissions. The first A1 represents pride with the least intensity and A3 representing the highest intensity of all. Arduino Nano 33 IoT to activate the golden wings and Adafruit Playground Circuit activates the music and lighting play. Indigo, golden yellow and creme white and magenta colour palette have been chosen to make the installation aristocratic, grand and royal. Glass jewel stickers and strings lights are included for additional aesthetic appeal. 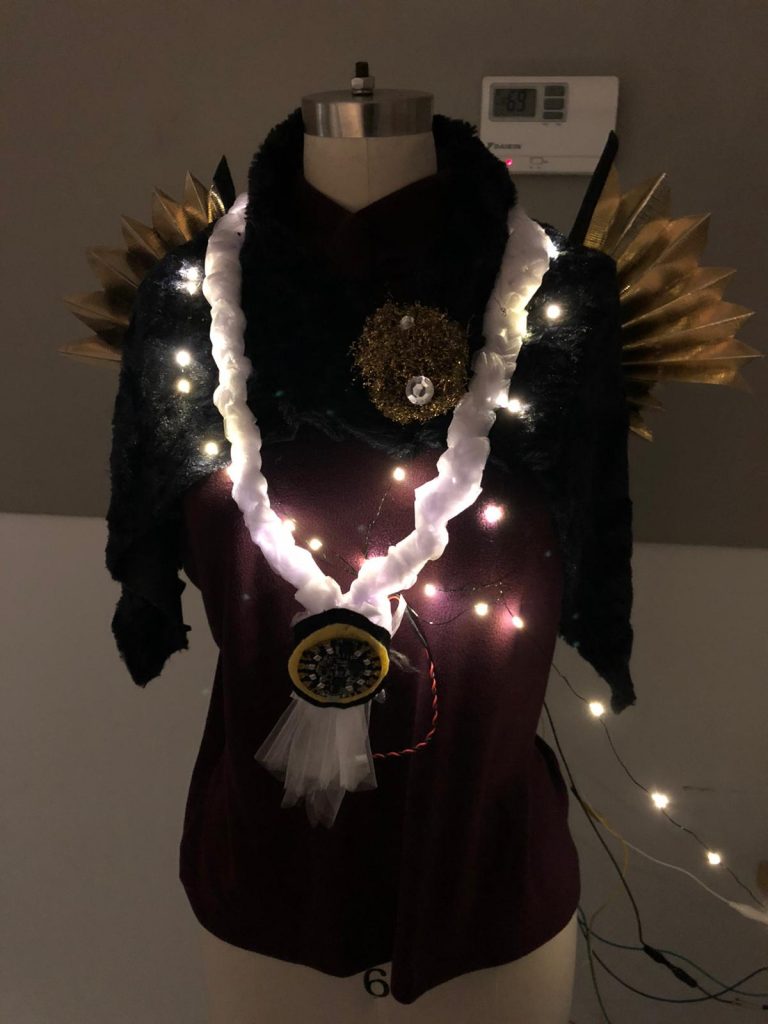 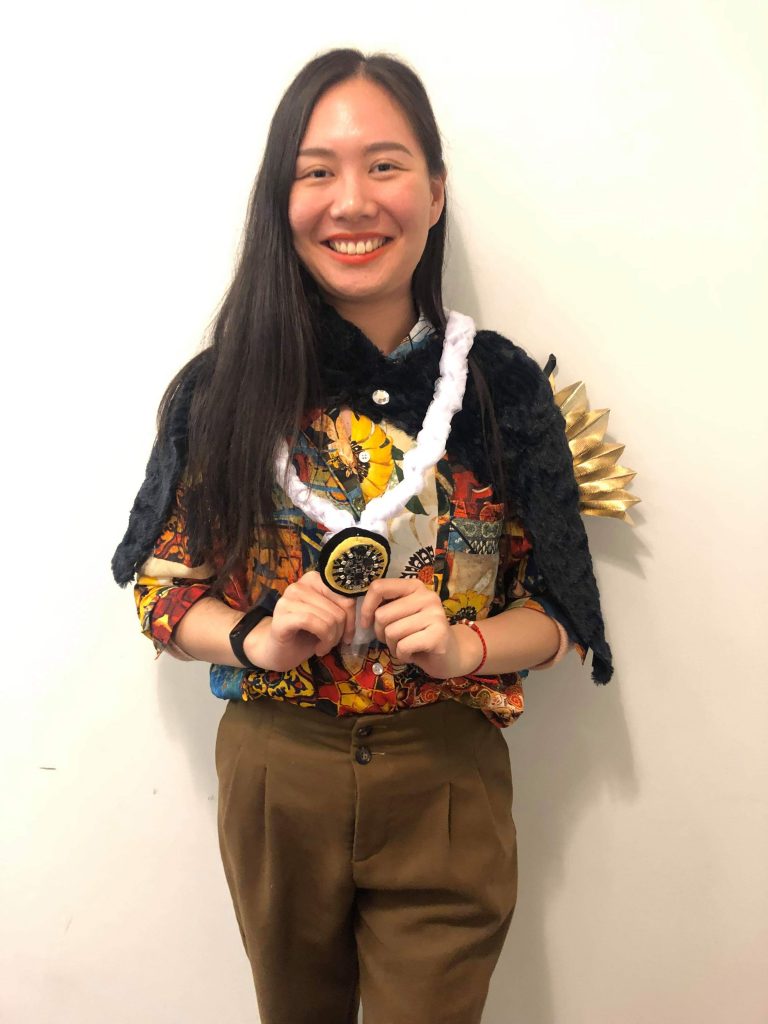 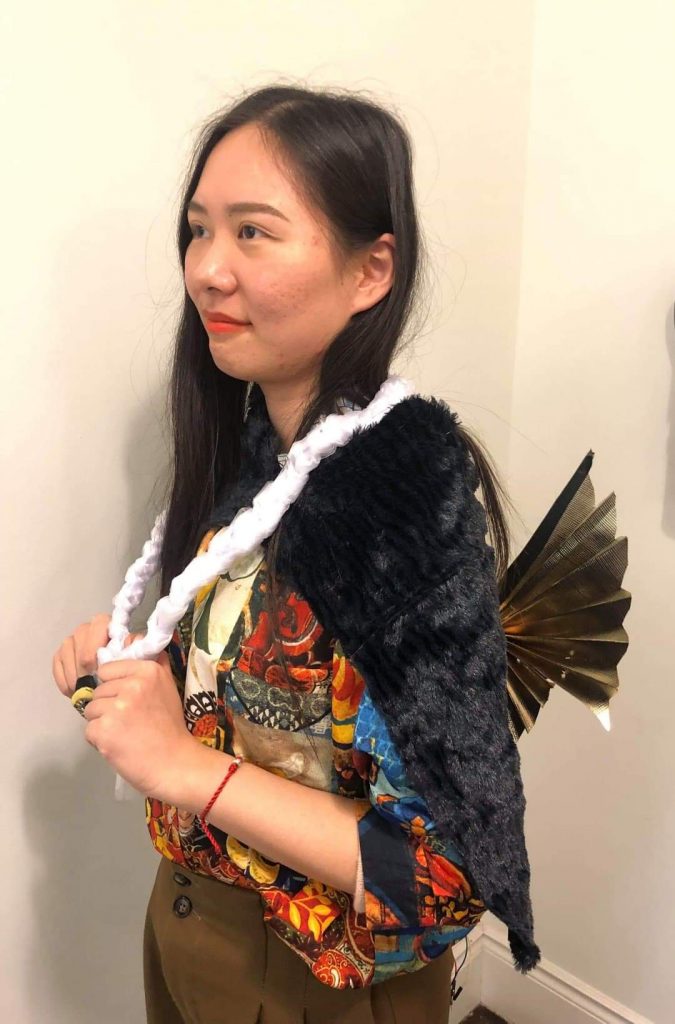 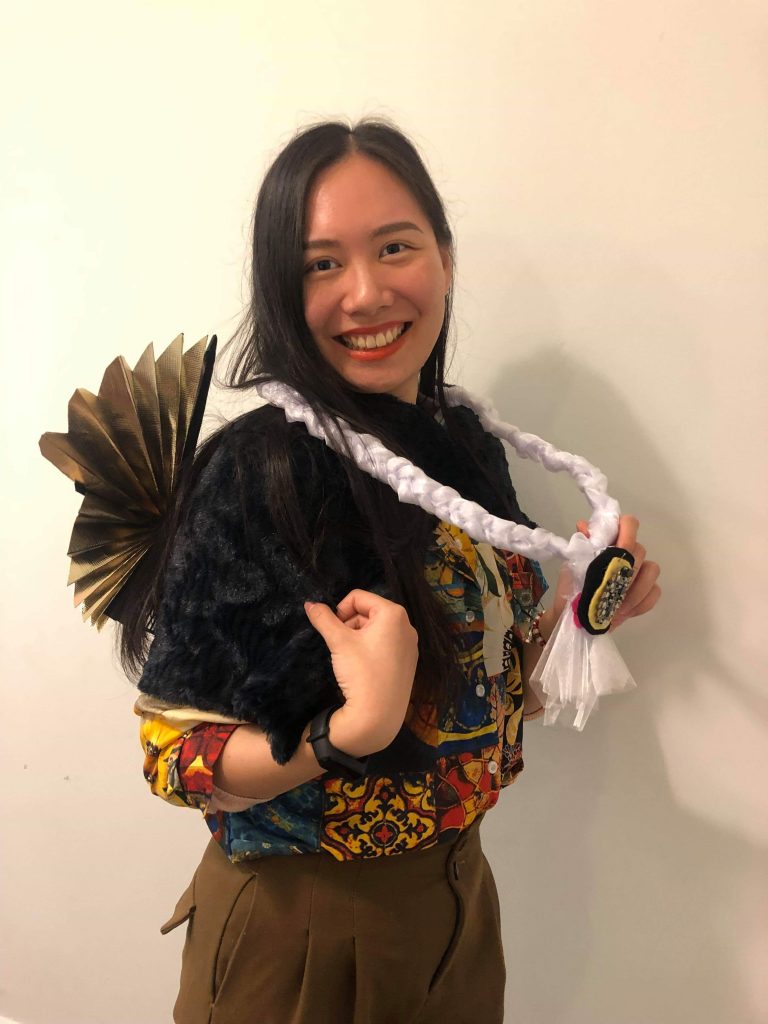 For the Garland (Front)

For the Wings (Back) 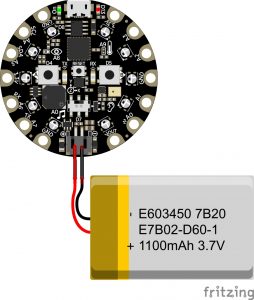 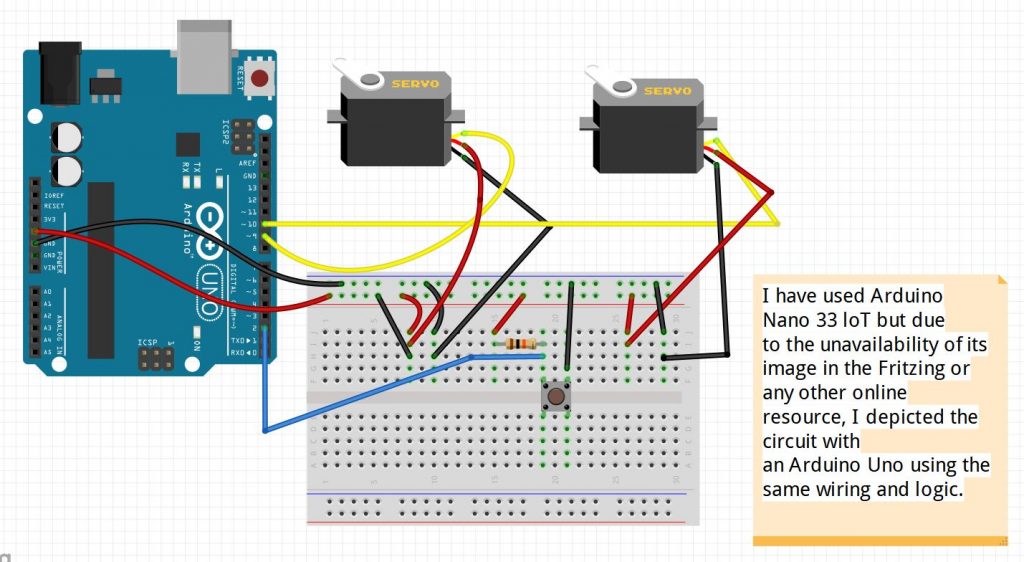 Activating the Golden Wings with Servo 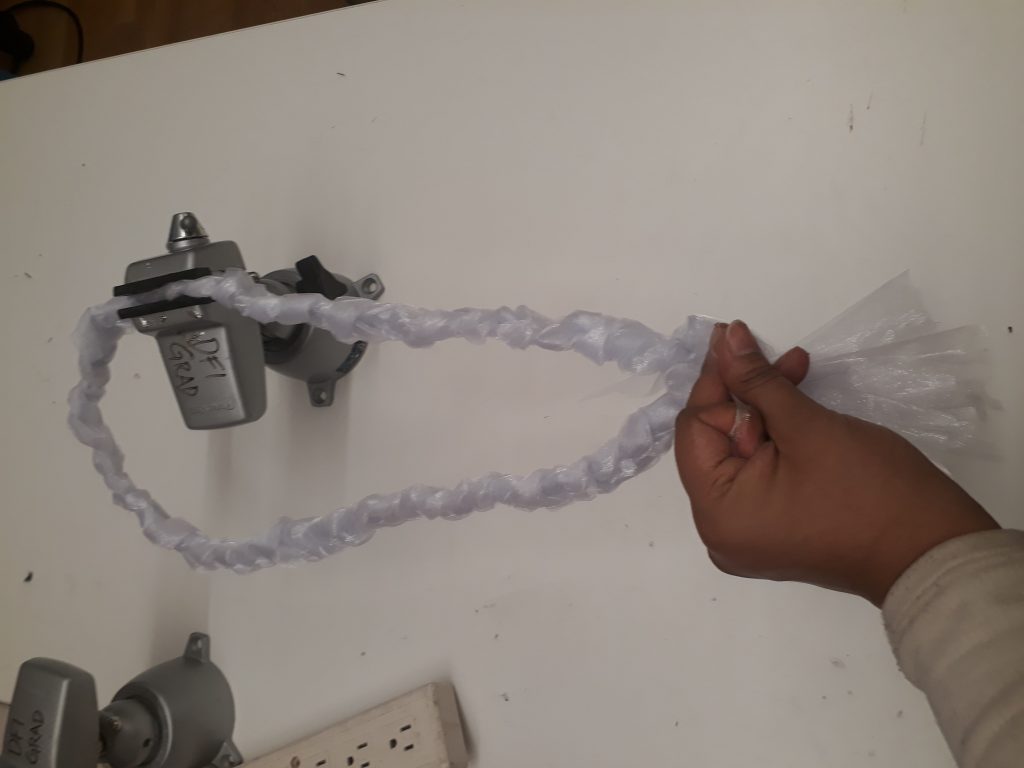 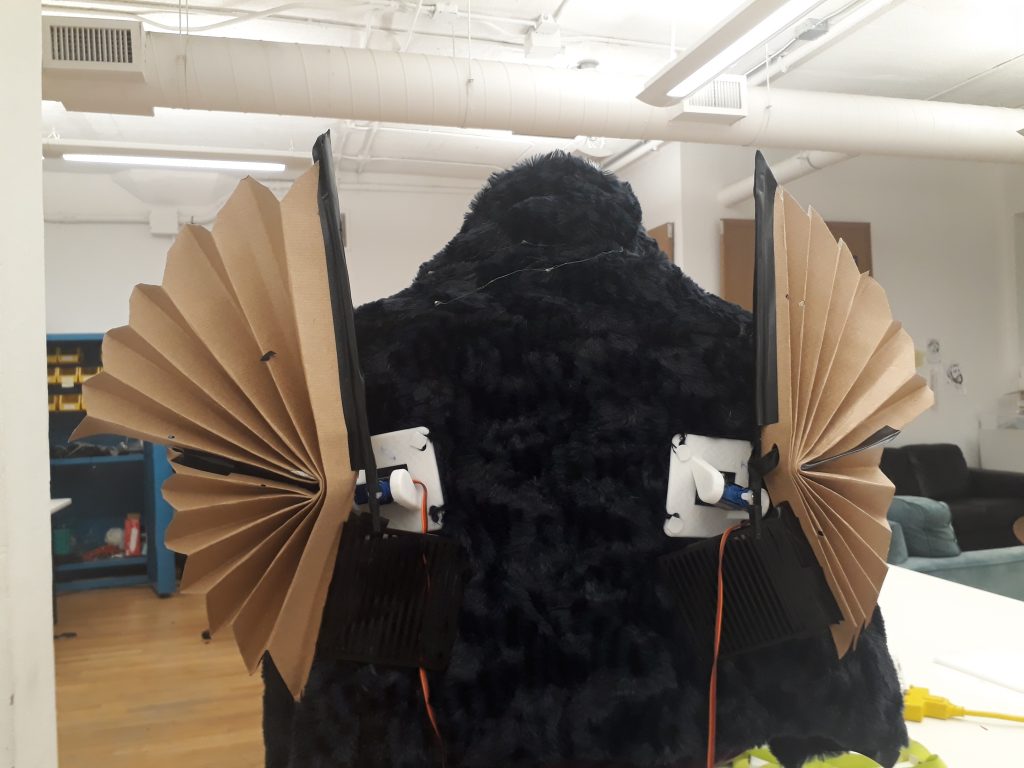 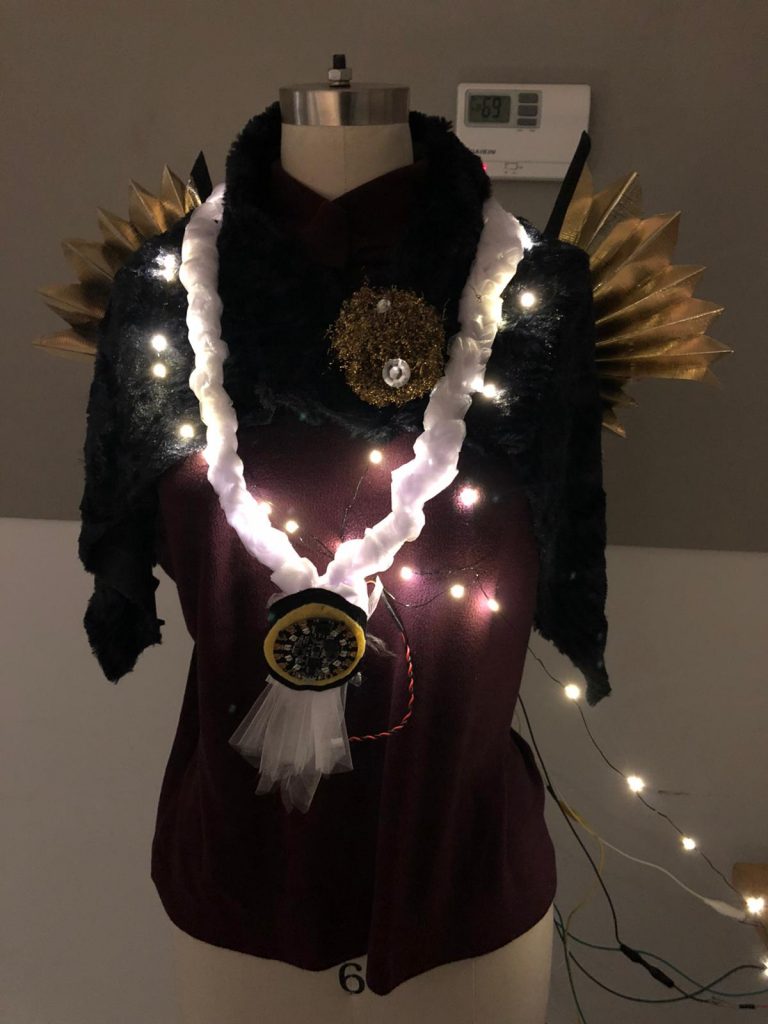 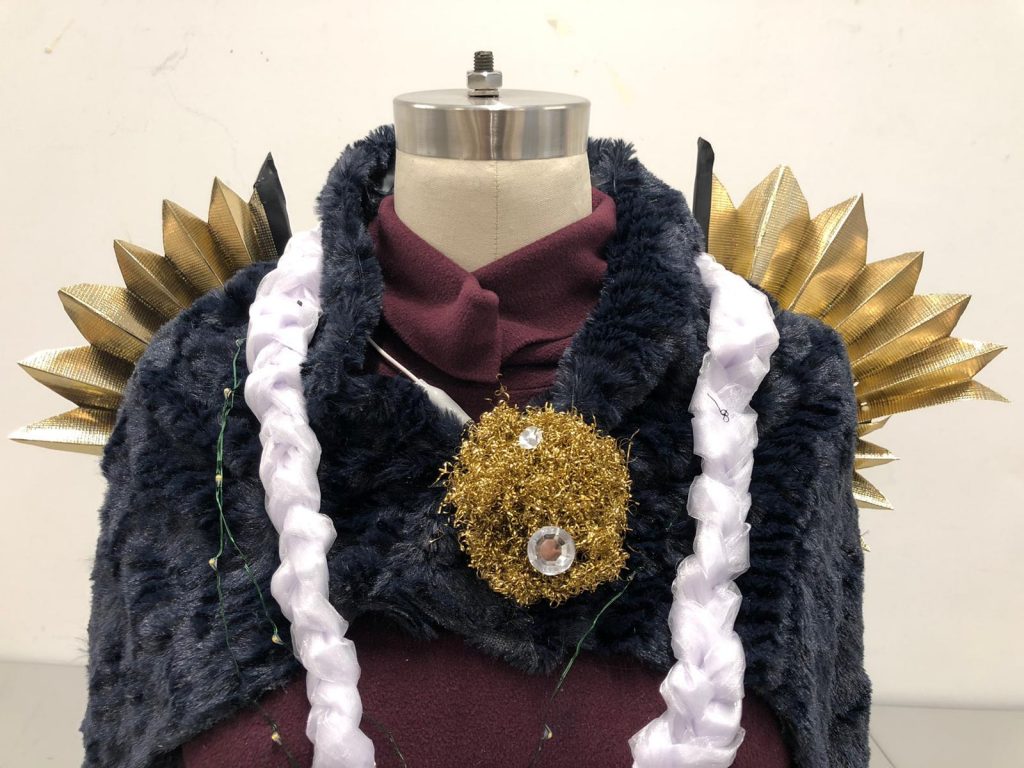 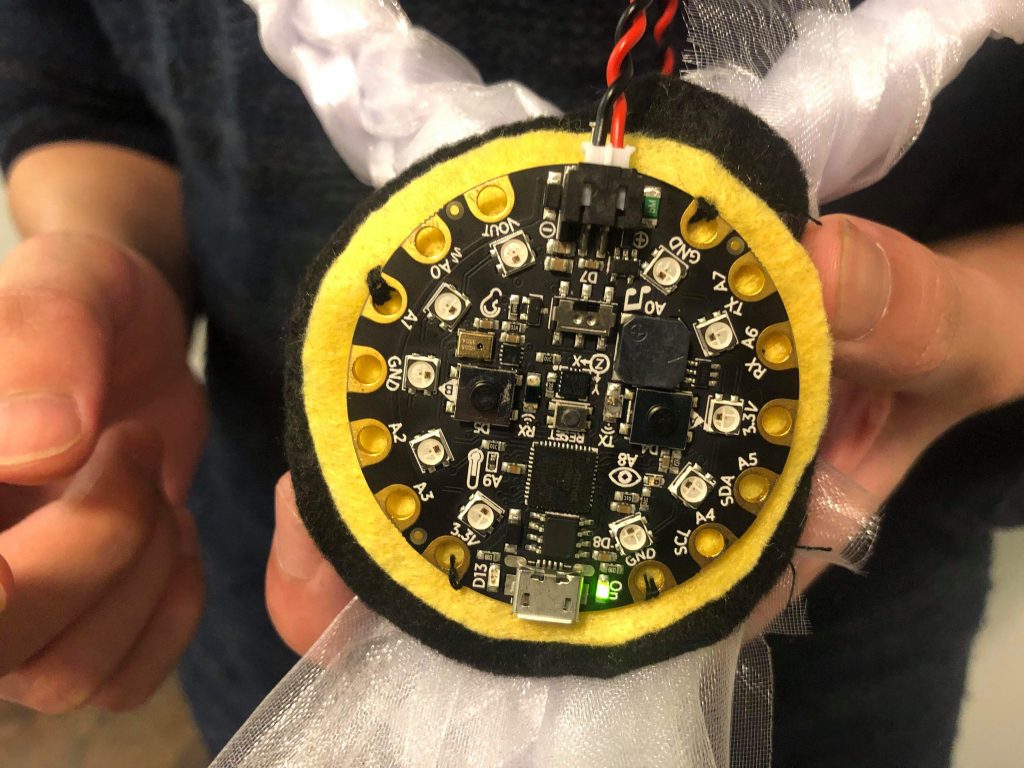 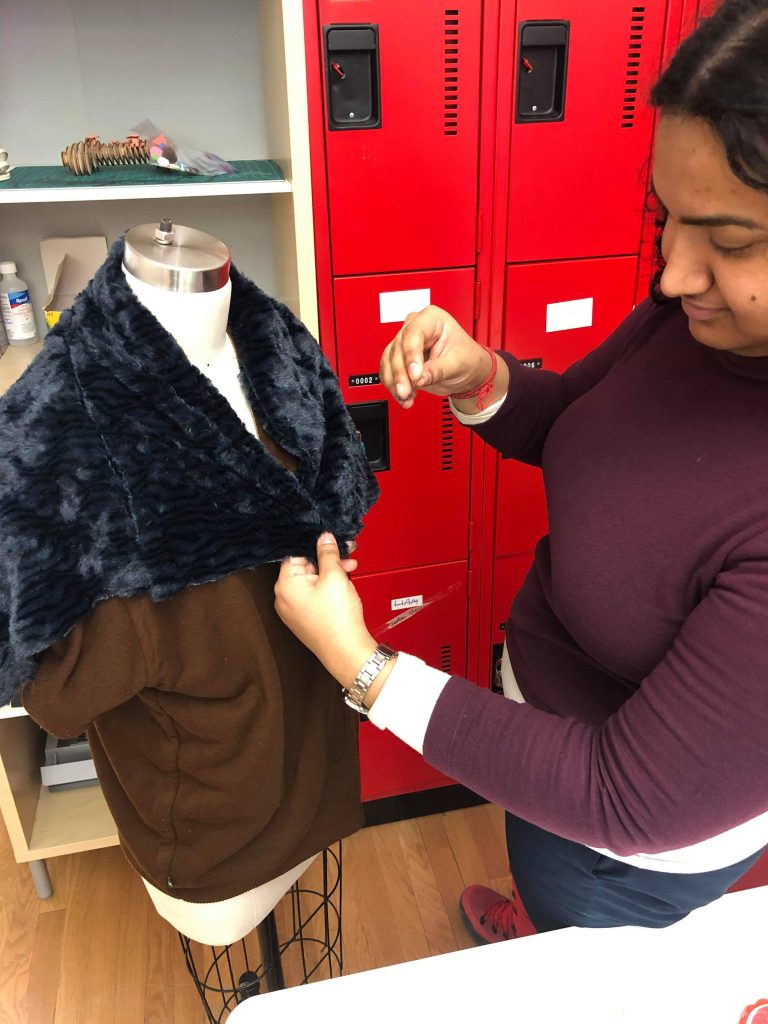 I chose classy and dark colours for an aristocratic and rich look. The fur shawl is stitched together in the middle to give it a majestic form. The wings are made using the knowledge of Origami – Japanese art of folding paper. I have used steel wood for the first time because of its conductivity and complimentary appearance that gets added to my project’s overall aesthetics or else I could have used any other conductive material. The net fabric is very flimsy, so I had to layer it up & braid the cloth fabric to add weight (preventing it from flying off). I had a difficult time pasting and mounting the servos on the back. For attaching it with the wings, I had to provide hard acrylics for supporting its edges. The acrylics were doubled taped from every side for stability and easy movement of the wings.

Flapping Wings, Does not Fly (Close-Up)

The idea of humans flying has fascinated several famous individuals like Leonardo Da Vinci or Daedalus (craftsman in Greek Mythology) since history.

When I was a child, my mom narrated me the story of Icarius – who got his wings made from wax & feathers by his father to escape from the prison. His father, Daedalus warned him not to fly towards the sun as it will meth the wax and the feathers will come apart. But Icarius did not listen to his father, became ambitious and flew towards the Sun to possess it. Unfortunately, his father could not stop him, the wax melted and Icarus fell to his death into the sea. This story creates a perfect epitome of the proverb – ‘Pride comes before the fall’.  I wanted to represent this concept – an individual who is overproud and blinded by his achievements is headed to his/her great fall. The higher one rises, the harder they fall.  When I saw Monarch V2

I tried making the wings with different widths of paper, with 70 gsm (copier paper sheets), the wings fell off & got torn easily. And with higher paper gsm, the paper would not fold and the servos were unable to more it. Finally, I got the right gsm & created my perfect golden wings. But to place it, I needed to tape it from both the side for stability and firmness. The servos were mounted on the 3D print out mounts. But still, I had to stitch them for assurance that it would not fall while flapping the wings.

Then for making the garland, I wanted to use the net fabric but since it gets spread & creases easily, I planned to braid it to prevent it from falling from the chest of the Judy mannequin. To stuck the Adafruit Playground Circuit, I stitched it on top of a circular yellow felt fabric so that it resembles a golden medal. The garland symbolically represents the achievement of the wearer.

I tried 180-degree coding at first, but it got stuck, then I tried with 90-degree where it did not look aesthetically pleasing. So I tried coding it from 120-140 degrees. This served the purpose very well and visually communicated my concept. For coding the Adafruit playground Circuit, I use Microsoft MadeCode Adafruit which is fun, easy but limited in terms of attributing specific colours. I composed some of my musical notes. I used the jewel stickers on the fur shawl for a royal touch.

I used steel wool for the first time as a conductive switch, as it can be shaped like a digital button which turned on & off the wings. But I do not suggest to use it as it is highly unreliable and easily breakable. It needs to be handled very carefully with the maximum attention one can devote. 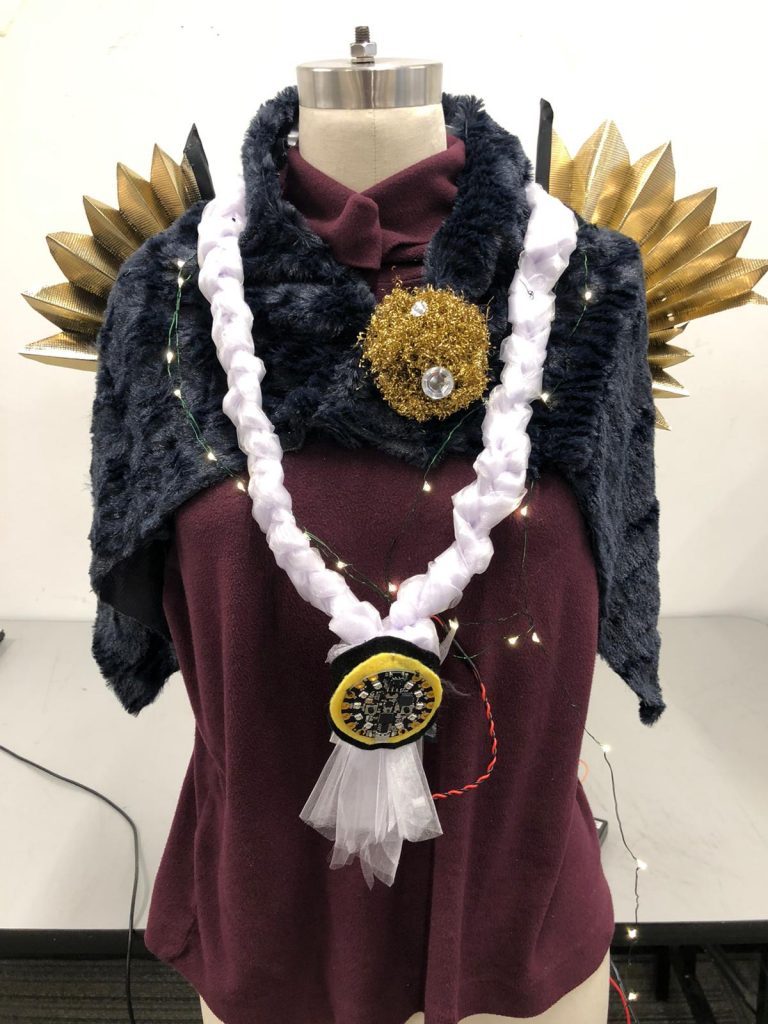 For final assemblage, I tied strings lights around the Judy mannequin for additional beauty and intensity. I tried using a darker room since I had incorporated a play of the NeoPixels but the wings were invisible. Since darker room defeats the purpose of communicating the message, I finalise to showcase my work in a well-lit room. 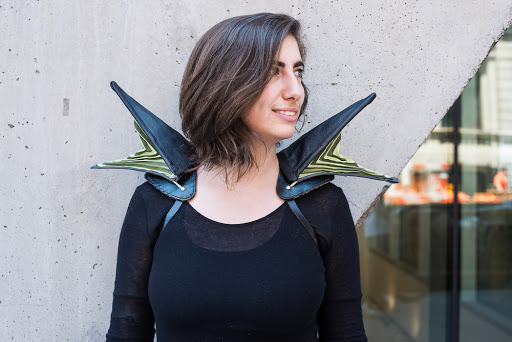