“You will not find it here” or Escapism through water.

Conceptually, my video represents a state of mind. Swimming is, in my personal case, not a physical activity but quite the opposite. For a moment, It liberates my body, my mind, and my imagination from my usual reality. Being surrounded by water puts me in a state of mind where everything becomes unimportant: matter, space, and time.

At the beginning, I thought that showing water, and how its appearance changes depending on light and the time of the day, was going to be enough to represent that state of mind. However, I realized that water was only the bridge. The important thing was how that element affects me and how my mind finds a way to escape. Some people use drugs and others need prayers and beliefs. There are as many rituals as there are people living on this planet. What I needed to say was… let’s escape through water.

With this in mind, I decided that still images, instead of actual video, was more appropriate for my purpose. Since the idea was to create some kind of illusions, and take that concept further to show hallucinations, I needed Photoshop to transform the images of water into something more dynamic and surreal. I needed to change its colour, its texture, and then combine images of myself, water and images of galaxies, fractals, and other illusions.

For two days I took several pictures of the pool, during different times of the day. I added images of myself walking, touching the surface of the water, etc. After that, I spent some time putting everything in order, creating different folders that I called “walking morning”, etc. That helped me a lot to create some sort of narrative.

Since I didn’t want to have any kind of dialogue or sound effects, I started looking for a soundtrack. I listened to different options carefully before deciding that “Heaven”, from the band HEALTH, was the appropriate song choice. What I liked about it was that it was not the stereotypical sound for introspection. Before importing images into iMovie, I put the music in and that gave me the rhythm. The music lead me to the idea of dividing the story into three segments.

The first segment was going to be the moment before getting into the pool, and then the images of me walking inside the water, kind of the first steps into another world. At that point I decided to add some kind of text, and after some research I came across a part in the movie “Caravaggio” by Derek Jarman. I thought it was perfect, because it was poetic, kind of surreal, and very descriptive of a specific moment right before waking up, like coming from a dream to reality.

From that moment the process became more difficult in terms of work. I had the concept and the other two segments very clear (2nd segment: hallucinations, final segment: coming back to reality). I spent three days mixing all the pictures, searching for images of fractals, caves, and other kind of resources, and kept adding them into iMovie. Keeping the same palette of colours and the same dream-like texture was very important.

The final segment, which is the shorter one, was a challenge, since I wanted this to use pictures without any retouching, to show somehow that the mind was coming back to reality. But I needed them to match with the rest, especially with the segment of hallucinations, which is very vibrant in terms of colour and texture. The key was to find the perfect rhythm.

Overall, I am very satisfied with the end result and the experience of this project. It achieved what I wanted to communicate, as well, aesthetically it is very pleasing in my opinion. It was a challenging project, but it was a nice ending for a very interesting class.

Searching online for ideas for my project (basically looking at how some artists work with water), I found this site:

Inspired by my dedication to “swimming activities” (technically I suck at it, but it basically helps me to relax, think and have a good time), I will do a short video to show the interaction of water, light, time and movement. Somehow I would like to capture what those elements (when together) produce on me, which is mostly “pleasure”. Physical and mental pleasure.

I have complete access to a pool which is great because I can go anytime I want, in the morning, at night… Always, because the light and the time is different, the experience is different as well. Even the fact that sometimes the light is natural and sometimes artificial, and even sometimes there is none, the perception I have of of the water changes.

What I’ll do from now on is obviously start shooting and trying different angles, and then study them to see if I am capturing what I want, and if not then figure out how.

I’ll try with video and with stop motion as well, or maybe a combination of both. With this project I will possibly  get a better understanding of myself, my own experience and my percepction of water, an element that I used to relate with negative feelings (old memories). I’ve changed that perception and right now it is totally the opposite.

1. Start taking pictures ASAP > tonight (Nov 9), and also Saturday and Sunday. After that I will be able to do a preliminary sketch of it and see what works and what doesn’t.

2. Next week: video shooting at different times of the day.

5. That will give some 3 to 4 days to finalize it and have it be ready to present.

My brain hurts. I’ve been thinking a lot, trying to find a good idea for this project. Then I realized that “that” was the idea. (I know I should have posted this before, even before the last class, but for some reason I haven’t been able to grasp this electronic stuff properly. My apologies to everybody that works hard with their projects, and to Kate).

This is more or less my project: The brain is the organ where ideas are processed, memories are stored, and desires are hidden. Sometimes we “touch” some part of our brain and “boom!” some reaction occurred. So, I am planning to place (somehow) an open brain, connected to LED lights. The interactive part: when someone touches with his/her fingers some specific are of this brain (the finger will be the switch), the light will be activated and it will show what’s stored there: an idea, a good memory, a bad memory, a desire, a crazy though…

I am not sure exactly how I am going to build it. It will be great if I can find a mannequin head, or a big doll head, cut the upper part, put a weird stuff inside that represents the brain, and through the eyes of this doll projects somehow what’s going on in the specific area touched by the visitor. But I know me, and I don’t have the skills to build this kind of sculpture. So I guess I will ended up making it flat, probably it will be a picture of the brain, connected through wires to small boxes around it, and inside them the “thoughts”. The boxes will be dark until somebody touches the brain and actives the LEDs.

I am working with the technique that Kate showed me for my old idea (the painting), using the hand as the switch, to connect 2 pieces of metal and active the light. That painting idea was born out of “no ideas”, and I think that the switch technique is better used with this “brain” project. It could be more interactive, and it will allow working on a project in a more personal level (my own brain). Hope it will work.

Watch my video here. Music by The Brian Jonestown Massacre (from the album Smoking Acid). The beautiful lighting and make up is all mine. 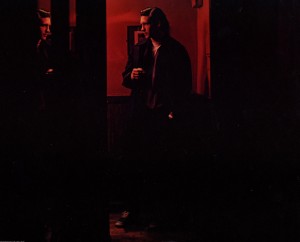 Synopsis: Night arrives and the darkness invades the city. In his room, the creature awakes. He begins to get ready for his night out.

To create this atmosphere I will use candles, shadows, and black clothes. As he gets ready the creature can’t hold back his excitement. He is going to dance, take a shower, have a good meal alongside his wine, and finally head to the balcony where he is going to fly away. He is not a terrifying monster, but a mischievous one. Not blood-thirsty, but one who just wants to have fun.

The video is not a “period piece”, rather everything is contemporary in style. My room will be the main set, and my friend will play the main character. The only difficulty I foresee, is the filming in the dark, which will be challenging for me. See below image for the lighting I want to achieve. 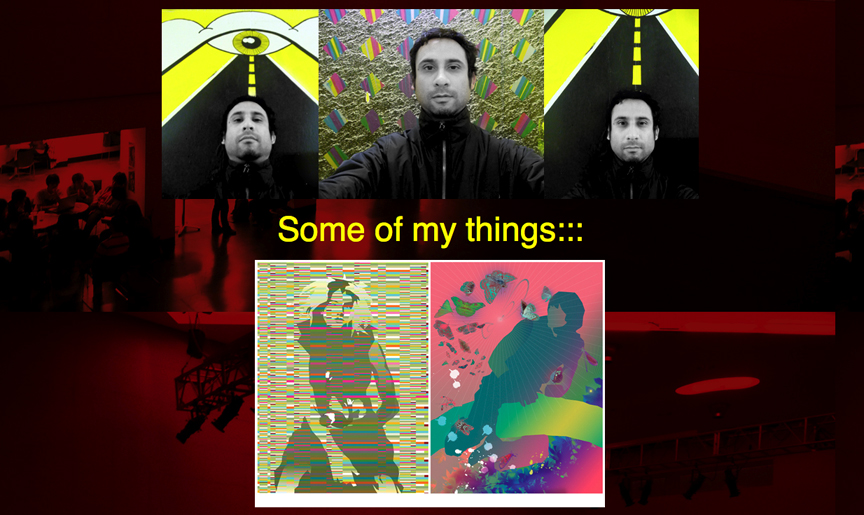 Done! My first attempt to a website is done. Some things I just didn’t know how to do them. I wanted to put my portfolio in a different page, open pictures in another window, play with fonts (size, colour, etc)… BUT at the end I am really satisfy with both the experience and the result. The background is a pic I took of the school. I just turned it red. I will keep playing with HTML until I can do what I have initially in mind. Love this class. Seriously.

Good Times For All!

“I don’t know where I am going from here, but I promise it won’t be boring”. Words of the great David Bowie. What I am looking for at OCAD? Maybe taking the long road to where I want to be, maybe having a great time, maybe trying to break the routine of work (I have a full time job), maybe trying to be less stupid & less lazy. I like drawing (mostly people), photography /everything/anytime/, writing, graphic design, and would love to try sculpture, fashion, music, digital art… And (the big master plan) combine them all. I’ll see how that can actually works.

Born in Colombia, enjoy traveling, but more than that I’ve been trying to experience life in different cultures. So far I’ve lived in 5 countries: Colombia, Cuba /for a short time/, USA, Spain and Canada. I would like to see Germany, Japan and Holland in the future. Who knows.