For my final project, I decided to make a short film entitled “Commentary.”  I worked with my cousin (who stars in the piece) to capture some very surreal, unconventional footage. With a loose concept at first, I allowed the film to change and develop over time. I edited using iMovie. The style of the editing is quick, disjointed and at times disorienting. After trying several musical arrangements, I decided to go with Miles Davis’ Bitches Brew. I think that this song choice was a good one, as it adds tremendously to the frenetic quality of the film.

After screening the film to some family members, and receiving many varying points of view and opinions, I was stuck with the idea to provide layers of commentary overtop of the piece itself. I wanted to explore the ideas of manipulating art and film, over saturation of the media and the inability to form one’s own opinions or interpret meaning for one’s self. The voices in the film bombard the listener with information and opinions that do not leave room for independent thought. The combination of constantly changing images and sound work as a cacophony. In this day and age the hype around a piece of art often overwhelms the art and becomes more important than it. We follow the trend and feel the way we are told to feel about art.  We are also no longer willing to suspend our disbelief. Instead we are obsessed with learning the behind the scenes knowledge. We watch films with the commentaries on, because we want to know what the actors and directors have to say. My short film plays with these ideas…

Overall, I had a great time working on this project. The editing processes became very addictive!

Here is the Link to my video…

So I recently visited the AGO and absolutely fell in love with an exhibit! The Alexander Calder: The Paris Years exhibit was truly one of a kind. I hadn’t initially heard of Alexander Calder, but the descriptions of his artwork really intrigued me and so I decided to check it out.

One of Calder’s most prized creations was his miniature circus collection. Calder fashioned performers, tight rope walkers, flying trapezes, lion tamers and many, many other circus pieces out of wood, wire, fabric and paint. I learned that Calder actually took his collection around with him, and did live mini circus performances! To me, the tiny creations are fantastic! In the exhibit, an entire circus scene has been set up, as well as numerous sketches Calder drew from real circus performances he attended in Paris, and a video of Calder doing one of his shows.

The second room of the exhibit is just as amazing as the first. Calder’s larger wire creations depict everything from circus performers and animals to faces of celebrities and unknown portraits. The pieces are for the most part purely constructed from the precise bending, twisting and wrapping of wires. His pieces are presented as mobiles, which spin slightly, suspended in mid air. Lights are used to cast shadows of the figures on the wall behind them. The shadows are intricate, dynamic and are as much apart of the artwork as the actual wire piece.

As well as the incredible pieces, the exhibit also has great information about the artist’s life, work, and travels. Drawings Calder did as a child as well as the actual suitcases Calder carried his miniature circus collection in, are also displayed at the entrance of the exhibit.  I was truly amazed and inspired by the work of Alexander Calder and am so happy I had a chance to see this wonderful exhibit! I would definitely suggest you all pay the AGO a visit and take a look! (The Calder exhibit is still free for us!)

So, I will also mention my ideas for our final project! I’ve been thinking that I’d really like to try doing another film. Something completely different, however, from my first one. I want to make a very surreal piece, using music. (maybe poetry) I want to experiment a lot in this project and shoot performance-based imagery and scenes. I’m really hoping to create a funky, little film which takes an unusual theme and runs with it visually!

Here is a link for a cool 50s magazine…which has predictions for the year 2000. This is definitely along the lines of my project.

So…I originally wanted to make a buzzer which the viewer could play around with to manipulate the sound. But after shopping around and testing out several buzzers…I found little variety and decided to go a different route. Although I ended up changing my initial plan, I have managed to make something still in keeping with the idea of experimenting with sound. What I have created is something I like to call; “The Rin-Tin-Tin-Aphone!” It’s basically a musical instrument that could have been seen as a prediction for the future in the 50s. Something that people might have suspected to see in the year 2009!

To start, I hooked up 3 different buzzers with corresponding button switches. I then created a silver, aluminum/tin outer structure. The tough part was getting the wiring to sit inside, while still having the button switches popping out-for easy access. I lastly attached 3 twisting, metal pipes/tubes to act as sound carriers for the buzzers.

My end result is a futuristic looking, 3 button music machine.  Yet it still has a very cheesy and kitschy feel, in keeping with the notion that this is a prototype of something people 60 years ago might have believed would exist today!

I also have a little performance-based introduction of my piece planned for class! 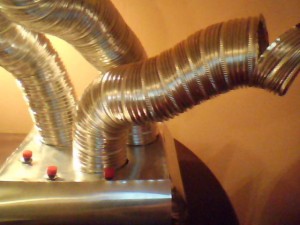 After much thought about which function I would like to explore in my project, I have finally decided on sound. I am also going to strive towards making my piece interactive and fun! I would firstly like to make a circuit that operates a buzzer noise.  Secondly,  I plan on creating several hollow objects which will either muffle, echo, or distort the sound. My plan is to put together a sort of game, whereby the the buzzer is covered with the varrying objects, in which ever succession or order the viewer chooses. The objects will be painted and decorated to represent the kind of sound and feeling the object will provide. (Example: Shades of bright, vibrant reds and oranges might indicate a loud or booming noise.) The participant would be able to have complete control over piece because they are changing the sound through removing and repositioning the objects over the buzzer.

This idea excites me because it can be seen as a combination of a musical instrument and a game. In fact, it reminds of a electronic version of playing wine glasses filled with different amounts of water. I’m really excited to see if my plans will come together, and hopefully my experiement with sound will prove to be an engaging and interactive piece!

HI! Here is my movie! http://www.youtube.com/watch?v=6pfljpdfSkk

The narrative of my film is about an artist who leaves her project filled with frustration…and while she is gone, everything begins to make itself! I used i movie and final cut pro to edit everything together and add musics/effects.  I worked in stop motion for the majority of the film; which I had no idea would take so long! In the end I decided to film the actions continuously and then later, through editing, cut still frames from the video clips. Overall I am pleased with the outcome of my film! I would have loved more time to work on this project, but I defiantly learned a lot in the process and would really like to get more experience with film making in the future!

I hope you enjoy!

When we got this assignment I started brainstorming possible ideas. I thought of several different methods/techniques that might be fun to try out; claymation, music videos, white board/human stop motion, but in the end I decided that for my movie, I would really like to play around with photography stop motion. I thought up a neat little art related story and am planning on setting it to music.

Basically the story is about a artist who is “stuck” on a project. When inspiration fails to come, frustration takes over and the artist gives up and leaves. That’s when the stop motion comes into play. All of the art materials begin to move, cut, paste and create (seemingly on their own!) and by the end of the piece, have magically finished the project. The artist comes back, shocked and confused but happily surprised. I think that this is a fun idea that incorporates two of my passions, art and music, with another passion, film. Never having had much experience with film making before, I’m curious to see how I will do with the stop motion. But I am excited to get started!!

Hi! Here is my webpage! I had a little trouble getting started on this assignment.  Unfortunately I’ve never been very good with computers. I was able however, to get a few pictures, a web link and my movie up. I also experimented a little bit with CSS. I think that this assignment was a good first start to the year, and I can’t wait to learn more, and hopefully be a lot more computer efficient by the end of the semester! Check it out! 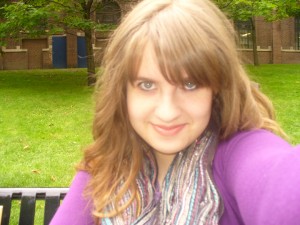 Hi everyone!
This is my first year at OCAD.  I just graduated from my high school in Oshawa and moved out to Toronto this summer. I’m currently sharing an apartment with my older brother and sister. The apartment isn’t the most convenient location in relation to the school, but I haven’t minded the subway commute yet. I have always been passionate about art and can remember feeling the thrill of making and creating ever since I was a child. I was extremely excited when I was accepted to OCAD and I can’t wait to see what the next four years have in store for me. Although I’ve had the most experience in drawing and painting, I have decided to come here with a completely open mind. I want to try as many forms of art and learn as many new techniques as I can, in order to make the most of my time here. OCAD has always had special significance in my family. Two of my uncles studied architecture and lithography at OCAD, my aunt studied textiles and fashion and taught here, and I have two cousins who are students with me right now. My brother, with whom I am very close, is a very talented artist and has always been my number one source of encouragement. Listening to him talk about art and watching him work has really taught and inspired me to push myself to continue to explore and create. One of my favourite artists is Marc Chagall. I fell in love with his work and have found him to be very influential in my own painting. Besides art, some of my interests include music, film, writing and baking!