For my final time-based media project, I have decided to create an installation piece. I thought of creating a spinning light source that projects images, or rather shadows of birds on walls. I also plan to accompany this with bird sound effects. I originally wanted the sound effects to be frightening but now I wouldn’t mind having a variety of bird sounds. For example: having peaceful sounds as well as creepy and terrifying. This will ultimately cause the observer to feel overwhelmed with different emotions and will allow the observer to escape into a different setting. This piece was influenced by Alfred Hitchcock’s film “The Birds.”

For the actual light, I have used two pieces of wood to create the base, a momentary switch, a motor, a piece of wooden stick to hold up the plastic container that is used as the shade that will evidently have the bird cut-outs (to create shadows). I also found these really large cheap Christmas lights that I will be using as the light source because LED’s wouldn’t help show the shadows. I would imagine placing this particular piece in a room with only white walls for a better contrast. If I had more money and time I would make the piece to be hung. Instead of it being on a stand I would want it to take as less space as possible, so that observers would not be distracted by the device.

Revisiting electronics was kind of a suicide mission from the beginning. I just wanted to challenge myself a little and make use of the left over materials I didn’t use for the electronics project. I thought that problem solving skills would work well here. As for judging the finish product as a piece of installation art, it really depends on whether the shadows are well shown and the combination of light, shadow and sound are effective for my presentation. There were definitely a lot of errors through the process of getting this assignment done. I did learn a lot and I will probably revisit electronics again, just not for school purposes. I think that there’s too much pressure, due to time restraints. Overall, I think that I did an okay job on the finished piece. I tried my best to make the idea in my head happen. I would change having the momentary switch to a dial switch so that I could control the speed of the motor and also I wouldn’t have to constantly push the button for the piece to work. I would’ve also experimented with different paper so that the shadows would show up sharper.
——————————————————————————
So I completely forgot to take pictures of my project and left it in my locker after class. I’m a complete idiot. And i’m most likely gonna pay for being so forgetful.

For the final project for Time-based media, my idea will revolve around childhood monsters and shadow puppets. My idea was influenced a lot by books I have read. This was a way to materialize the images that enter my mind when I read the books. I either want to do a video narrative of shadow puppets or have an installation piece, where I will create a device where shadows/silhouettes of the monsters will rotate (this will obviously include light). I will play around with different papers, to see how the translucency affects the sharpness of the silhouettes and so on.

– decide whether I’ll be doing an installation or a video

– get materials for shadow puppets

-shoot the video or start creating the rotating device.

-add the finish touches to the project on the weekend before its due (Dec. 3’09)

My idea was originally the artwork that lights up with the use of a motion sensor. I tried my hardest to look for a motion sensor or as Kate suggested, some sort of step switch. I was not able to find any kind of switch. So I was basically left with using the switch that I had originally purchased.  I first had a toggle switch. I thought that if I were to use a toggle switch the piece wouldn’t be so interactive. I went back to the store to look for a more suitable light switch, that would possibly turn off after a certain amount of time. I asked the people at The Source if they had anything of the kind and they gave me a Momentary Light Switch. But when I tried it out, it wasn’t what I had in mind.

END_OF_DOCUMENT_TOKEN_TO_BE_REPLACED

My idea is to create my electronic project on sound and projection. I plan to connect a buzzer to a light bulb and have three sets or more, I haven’t decided yet. And in front of each bulb and buzzer there would be acrylic glass with a word or a picture on it. I’m thinking of sticking the word or picture by spray painting, painting with acrylic paint or cutting the word onto sticker paper. I plan to have each bulb have a different colour and each buzzer have a different sound and when the switch is flipped, the bulb goes on, the buzzer goes off and the word or picture is projected onto whatever’s in front of it. I plan to make the pieces of acrylic glass interchangeable, so that the words or pictures can be changed or rearranged. Supplies I’m using are: buzzer, toggle switch, light bulbs, and AA batteries

Another idea I had, but not sure if it’s possible is to have a painting that involves LED’s that only go off when someone is in front of it or passes by it. Just like the security lights in front of people’s houses. When someone passes by it, it goes on. I will do this by using battery operated motion sensors. The point would be that, the artwork cannot be seen or appreciated without someone to observe it from up close.

I am not good with technology or electronics at all. Which is why my ideas are really simple. To be able for me to complete this assignment successfully I had to simplify ideas I had. I plan to make my project aesthetically pleasing to make up for its simplicity. I hope my plans go well.

My 2 minute video is titled “At the Tent”. I ended up making my video on a fashion show that I interned for. It’s pretty self-explanatory. Fashion Week was held at a tent on King St. W therefore the title “at the tent”. I had to use my own digital camera. It doesn’t have very good quality. Throughout the whole video, almost everytime the models on the runway were glowing white light, which led to not seeing the clothes. Which diminishes the idea of the video. Some shots were really shakey and the person’s head that was infront of me was seen in some shots of the video. I would definitely pay more attention to the little details if I had an oppurtunity to do this project again.

go easy on me.

I have two ideas in mind. First idea is a stop-motion video of my dog and his everyday activities. I plan to basically follow him through his walks, naps and snacks. I plant to have background sound effects for that idea and will have moments where its an over the shoulder shot (maybe), following shots and point-of view shots.

My other idea was gonna be a kind of Nylon magazine type podcast (if you have an itunes account, Nylon magazine podcasts are free). They’re basically about fashion shows or new up-coming bands, tv shows or movies. But in my case im doing one on a fashion show. Because LG Fashion Week is coming up and I’m interning for one of the designers. The video will include background music, one song will transition into the next. I will try to play with different shots that’ll work for either idea. And experiment with different effects of editing. I’m hoping that ateast one if these ideas work.

This assignment was a a bit of a challenge for me. I’ve never worked with html before. I’m all for uploading pictures and writing in a text box. But to do everything “manually” was kinda tough. It is though, very useful to know how to use html and I have learned basic things like… how to convert a text edit file into an html (i couldn’t figure that out for the longest time because i forgot) and how to change background colours and fonts etc. For some reason though the picture I posted isn’t showing up on my page. I got the codes right too (I asked a lot of people) but it still isn’t showing up.

Here’s a link to my web page. 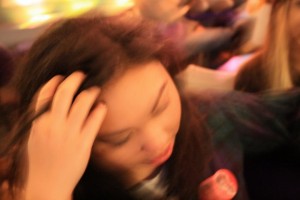 Hey, my name is Denise Martin.

I mostly work with acrylic paints and pen and ink. I enjoy mixed media work and photo transferring. Some of my favourite artists are Robert Rauschenberg, Terry Richardson and Elizabeth Peyton. I’m a sucker for popular culture (i.e. celebrities, fashion and rock and roll). I do feel that popular culture is what defines any generation and art has always been a reflection of the time an artist is in.

I have recently received my diploma from the Fine Arts Studio Program from Centennial College but felt that there was still so much for me to learn. My goal is to be an exhibiting visual artist and I know that being at OCAD will help make that happen.