Weaving is an ancient technique that we continue to use today with technological advancements. Many of our textiles are woven on industrial looms allowing for the mass manufacture of cheap clothing. Jacquard looms were also an early development in computer science, allowing for “(t)he ability to store and automatically reproduce complex operations…”. Jacquard Loom

Resources in the GTA and OCAD

OCAD’s Fibre Studio has a number of hand and floor looms available to students taking certain courses or with permission from the Head Fibre Technician Laurie Wassink; as was my case. Looms can be bought second hand fairly easily on sites like Kijiji but can get quite expensive with one-floor loom going for $750. An expensive investment unless one is planning on many projects. Another option is to join a Textile Co-op, similar to a Maker Space – and enjoy more space and equipment than most could afford on their own. Lastly one can try building their own loom to use.

Examples of this technique in use

While most weaving examples around the internet are for traditional weaving, the site “Get What You Want” demonstrates a few examples of how weaving can be incorporated into electronics

Previous to this experiment I had never used a loom to create a project though I had a chance to try using one around ten years ago and I still remember how enjoyable I found it. While I had no experience in using a loom the Fibre Studio faculty and students were kind enough to help me learn the basic skills. However, I did find myself limited by my lack of knowledge which can be remedied in the future with further exploration and study in weaving and other textile construction techniques. 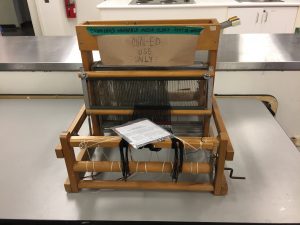 Setting up the loom

For my first experiment, I wanted to use fiber optic filaments to create my own fabric. Fibre optic fabric that is available for purchase is expensive and comes in very limited sizes so I was curious to see what future potential there was for creating my own. I ordered the filament from Amazon though the limited size and expense means I will look for an alternative supplier in the future. One major factor was that the warp was already set up with a black yarn. To set up the warp with fiber optic filament would require an extensive period of time and a higher skill level. So in this case only the weft was fiber optic filament. As a first experiment I’m satisfied with this technique and will explore it again. Changes will be using thicker filaments, refining the filament sanding process and learning how to set up the warp. 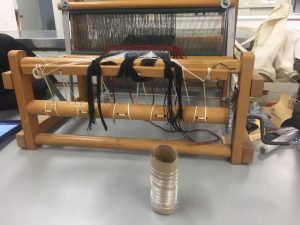 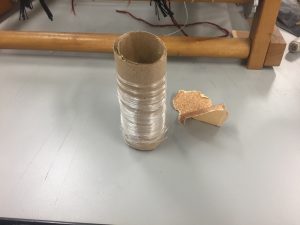 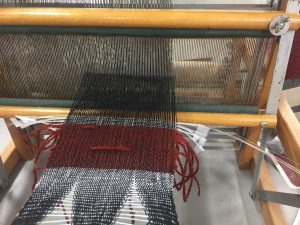 The second experiment was to try and incorporate a circuit into a textile. I speculated on a future where we can interchange electronics on our wearables due to pre-made circuits on the clothing. This would make wearable technology more accessible for those that cannot sew. There are other ways pre-made circuits could be achieved but I choose to focus on the potential of weaving them in. I used conductive thread and made a bridge switch 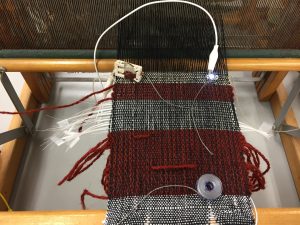 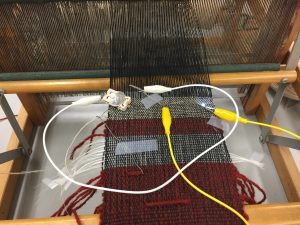 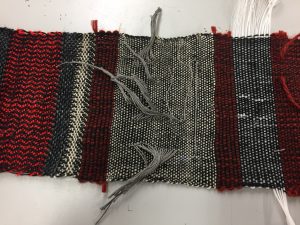 Unfinished threads on back

My final experiment was to create another circuit but using silicone wire instead of conductive thread. 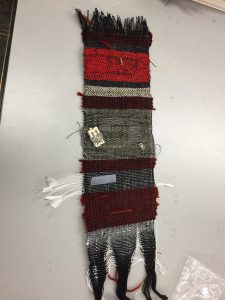