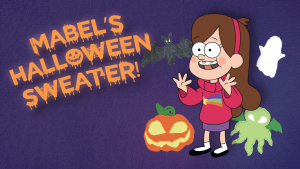 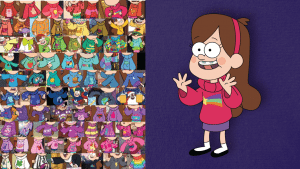 Mabel Pines is known for her vast collection of turtleneck sweaters, which tend to feature things that are cute, cuddly, fantastical and hilarious. In the opening credits of the show, Mabel can be seen wearing a plug-in sweater featuring her name, light-up stars and a rainbow. 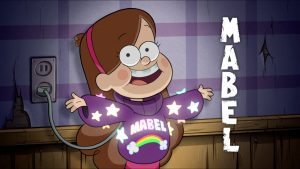 For the project “wearing light”, I wanted to create a sweater that Mabel would conceivably wear. I wanted to make it feel cozy and homemade, with the same adorable and whimsical spirit present in the rest of Mabel’s wardrobe. I originally had this idea around Halloween, hence the subject matter of the sweater. 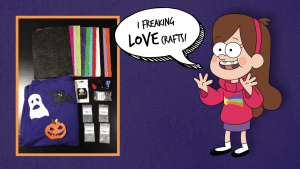 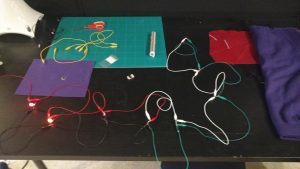 First order of business was to test my circuit. I was planning on wiring 8 LED’s in parallel and wanted to make sure that this was in fact possible before starting to sew. Lo and behold, for some reason unknown to me, this circuit wasn’t lighting up completely, so I started swapping out LED’s until… 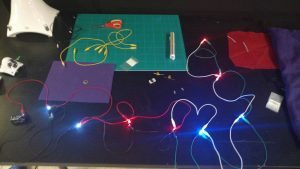 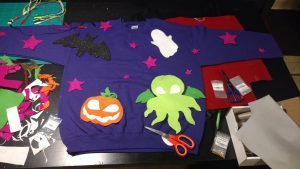 I made a few concept sketches of my ghoulish creatures until I was reasonably satisfied with the look and feel, then I cut everything out of crafting felt. 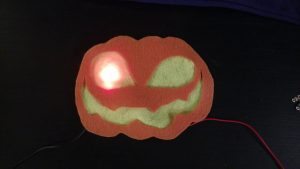 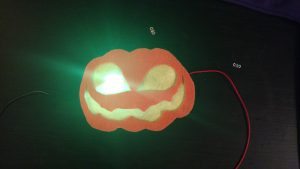 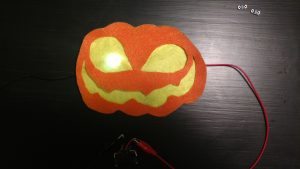 I experimented with different colours of LED’s for the eyes, and I eventually settled on a set that functioned in the circuit with no funny business. 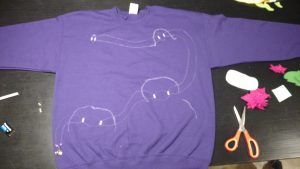 At this point I was ready to start sewing, so I made a chalk outline with some edges of the characters to make sure that everything would line up and there wouldn’t be any wonky eyes (although that wouldn’t have been the worst thing in the world). I started by sewing in the battery snap and went chronologically from there, using a new thread at each connecting point in the circuit. I made sure to space my negative and positive traces sufficiently away from one another. I created arcs from each LED, where the traces get dangerously close to one another and the risk of a short goes up. 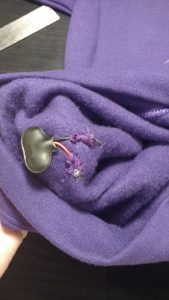 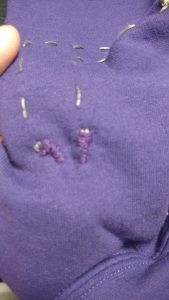 Some reinforcement for the snap. 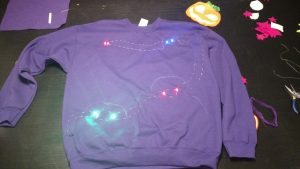 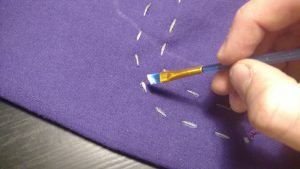 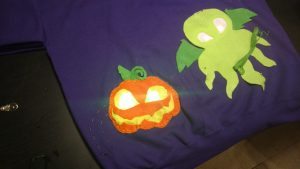 I used embroidery thread to affix the ghouls to the garment, and there you have it! Mabel’s Light-Up Halloween Sweater!

At the time of this writing, the 9V battery snap unfortunately detached from the garment, rendering Mabel’s poor sweater in need of repair, and a robust pouch to protect the snap’s thin wire from wear and tear.