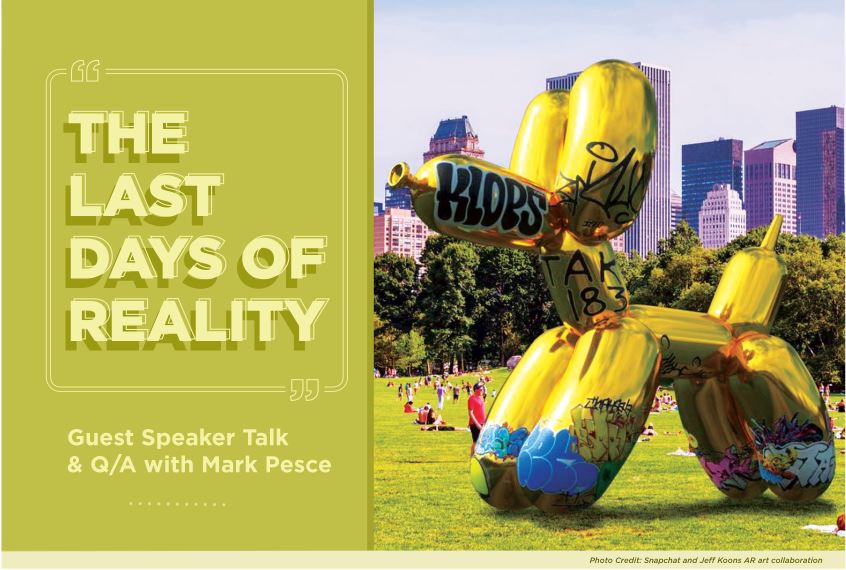 On the 3rd of October, Snapchat released an augmented reality ‘collaboration’ with artist Jeff Koons. Plopped in the middle of New York’s Central Park, Balloon Dog heralded a new form of presentation – and appropriation. Within 24 hours, artist Sebastian Errazuriz had ‘tagged’ the work (again, entirely virtually), in a “symbolic stance against imminent AR corporate invasion.”

That invasion is already here, marking ‘The Last Days of Reality’, when the boundaries between authentic and manipulated experience collapse into a newly-emerging ‘post-real’ era. What are the rules of the post-real? Who controls our senses – and, by extension, what we think and believe? What other sorts of interventions, appropriations and responses would undermine this latest assault of public space?

Mark Pesce is an inventor, author, educator, broadcaster and entrepreneur.  In 1991 he founded pioneering consumer VR startup Ono-Sendai, inventing a orientation sensor (US Patent 5,526,022) licensed to Sega Corporation for Virtua VR. In 1994, Pesce co-invented the Virtual Reality Modeling Language (VRML), the standard for interactive 3D graphics on the Web, and went on to found BlitCom, delivering streaming VRML entertainment into the browser. Last year Pesce announced plans for the Mixed Realtiy Service (mixedrealitysystem.org), an open-source Internet-scale system to arbitrate and annotate augmented realities. Pesce founded postgraduate programs at both University of Southern California’s Lucas School of Cinematic Arts, and the Australian Film, Television & Radio School. He currently holds appointments as Honorary Associate at the University of Sydney, and Honorary Adjunct at the Animal Logic Academy of the University of Technology, Sydney. Pesce writes fortnightly a column for The Register, and hosts podcast The Next Billion Seconds.