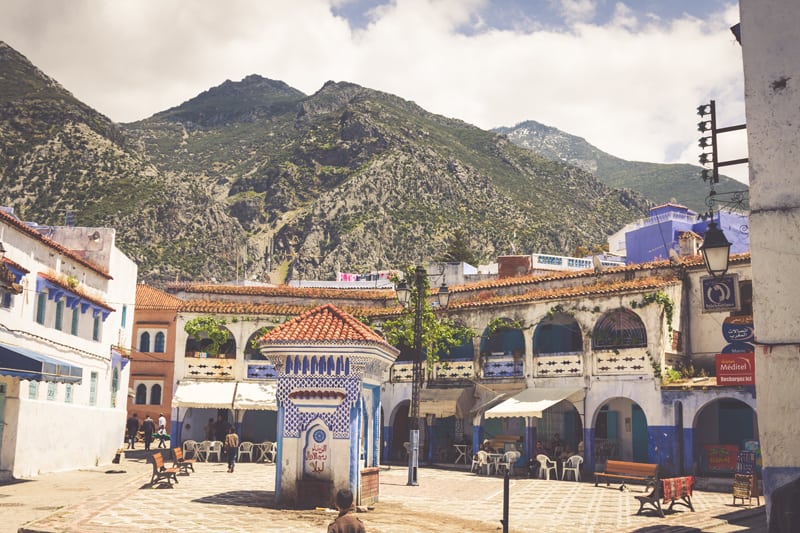 Chefchaouen, Morocco -May1, 2013: Architecture of Chefchaouen, small town in northwest Morocco famous by its blue buildings

Jamilah and the Hammam
by Miriam Magsi

I flew to Morocco while studying Interdisciplinary Art, Media & Design at OCAD University in Toronto, Canada. Moroccan feminist, Fatima Mernissi, described Morocco as ‘a beautiful place. It’s incredibly beautiful. And also it is a captivating place because for a writer, you feel that you make impact.’ I was hoping, as a visual artist, to feel the same.

I could write pages on my experiences in Casablanca, Fez and Chefcaouen. The sunsets are glorious. I thoroughly enjoyed mosque-hopping against cacophonous azaan (call to prayer). The vibrant colours of the architecture and the interior design, the flavours and aromas emerging from the chaotic bazaars, the sweetness of the people, the sweetness of ‘Moroccan whiskey’ (mint tea), and the sweetness of Moroccan hashish all made for a whirlwind of a trip.

I was strolling through the blue and white painted streets when I bumped into a friend I had made at a restaurant in the medina. Chefcaouen is small. If you’re there for more than three days, the locals consider you family. Don’t be surprised if someone takes you home for tagine. The hospitality is exceptionally warm and generous.

‘Today, can you recommend a hammam for me? I would love to get a Moroccan scrub and a massage.’

We walked through several streets, stopping every five minutes so I could take photographs and buy souvenirs from storekeepers with unmatchable salesmanship. Eventually, Ahmad brought me to a hammam with a sign outside that dated back to the 12th century. Local women were walking in, with children on one hip and plastic baskets filled with toiletries on the other. I prepared myself for an authentic experience, satisfied with Ahmad’s obvious local expertise.

Ahmad banged loudly on the door and yelled out a thunderous ‘SALAM ULAIKUM!’

After a few moments, out came an old, rather hefty, Moroccan woman, wrapping her hijab tightly around her head, sweat running down her forehead and cheeks. Her figure was large, round and robust. We cowered as she walked toward us.

Ahmad introduced us, and then held a conversation with her in Arabic, which I did not understand. I knew several prayers in Arabic because I received customary Quranic recitation and Islamiat lessons growing up. These always come handy in Muslim majority countries. After chatting with the woman for a few minutes, his smile turned into disappointment.

He said, ‘She won’t allow you in there because she thinks you’re not Muslim.’

‘Why?’ I asked. ‘Is it written on my forehead or something?’

‘Well, no. It is because your hair isn’t covered. Muslim women here wear hijab.’

I couldn’t help but let out a giggle. The woman was not pleased and glared at me.

‘Maybe if you recite something from the Quran, she’ll believe you.’ Ahmad looked at me rather matter-of-factly.

Utterly dismayed at this requirement, and yet not wanting to deprive myself of the hammam experience, I reluctantly recited the Surah Fatiha, a prayer my mother and the neighbourhood maulvi had helped me memorize from the Quran.

Suddenly the woman’s face broke into a smile, and she held out her hand.

‘Give her some money and she’ll take you in.’

I scrambled to find some Moroccan dirhams in my bag, took out a handful, and gave them to her. She took the notes with her rather large, chubby fingers and stuffed them into her bra.

‘My name is Mariam’ I responded. Trust was established.

I had no idea what I was about to encounter. I bid Ahmad and goodbye and walked into the hammam with Jamilah.

I was greeted by square cubicles. I had to leave my phone and journal in the cubicle along with my clothing and handbag. I did as I was told, pretty certain that I would be scolded endlessly if I didn’t adhere to Jamilah’s rules and regulations.

She gestured at my body and threw a rough, white towel at me. I neatly folded all my clothes. Just as I was about to reach for my underwear, I heard a loud, screeching ‘Laaaaaaaaaaa!’ from Jamila.

‘Ok! Ok! I’m sorry! I didn’t know. It looked like you wanted everything off!’ I laughed nervously, clutching the towel tightly.

Jamilah made an annoyed ticking sound with her tongue and grabbed a wet, pink basket, throwing in shampoo, a bar of soap, two plastic bags with powdered substances in them, a jar filled with golden argan oil and a wooden comb. I had never experienced a massage with all these ingredients before. I was especially mesmerised by the wooden comb. I imagined that Jamilah would be scraping my back with it? How naïve of me!

I followed Jamila, watching other women who had just emerged from within the hammam. To say that they were glowing is an understatement. These women were emanating light. I felt like I needed sunglasses just to look at them.

Suddenly the hallway opened up into a large, slippery hammam with gorgeous sunlight allowing dancing rays into the steam. This was unlike anything I had ever seen in my life. There were loud, chattering Moroccan women bathing themselves along the entire circumference of the hammam. Many of these women were also bathing their children.

I was very confused. I hadn’t figured out what was going on. Jamila pushed me onto the floor in a corner, walked toward the centre of the hammam and pulled out a bucket of cold water from a well. She then walked toward a wall and filled a bucket with hot water from a large tap. Both buckets were placed loudly in front of me. I sat there cross-legged, anxiously awaiting a Moroccan scrub and massage from Jamilah, but also petrified for my life.

A curvaceous, fair-skinned Moroccan woman approached Jamila angrily. Her hair was wet, stamped to her forehead; she had a large pair of what looked like boxer briefs on. Her body was heaving. She was panting dramatically.

‘Jamilaaaaaaa!’ she yelled, following this with a string of angry Arabic. Jamila turned toward her and grabbed her by the neck, yelling back into her face. The women lining the wall continued to bathe, insouciant.

A woman to my left took the two packets out of the basket in front of me. She reached into the packets and rubbed the mixtures into my forearm. Through the organic scents I recognised that the mixtures were ubtan and henna. Even though we did not speak the same language, the woman was guiding me through the bathing rituals.

I looked around and then it dawned on me that this was not a spa at all. This was a historic, ancient, Moroccan public bath. These women were bathing in the ways of their ancestors in an open, unabashed and social, communal manner. They were scrubbing their bodies and their faces, rubbing mixtures, powders, pastes and concoctions into their skin and combing out their conditioned, argan oil-soaked hair. There were rough mitts provided with each basket and the women were aggressively scrubbing layers and layers of dead skin which sloughed off like confessed sins. Dirty water splashed along the floors toward the drains, under beams of sunlight. The loud echoing chatter of brawls, salacious gossip, and mothers scolding and scrubbing their whining children provided the soundscape.

I reached for the mitt and Jamilah appeared in front of me. She lifted a bucket and dumped the now warm water on my head, completely taking me by surprise. She then squeezed shampoo and conditioner into her henna-stained palms and began to rub the mixture into my hair. Eventually she reached for the comb and tugged it through my tangles, muttering away angrily under her breath. I tried to stop her, so I could continue bathing myself in peace, but she was an unleashed monster; impatient, angry and on a mission. She was going to see to it that I was bathed.

So, here I was, a 31-year-old woman, on the floor of a communal, public hammam in the Riff Mountains of Chefcaouen, being bathed by Jamilah. I couldn’t help but burst out laughing. The louder I laughed, the more other women joined me, until all that could be heard was our loud laughs rippling through the steamy air. Jamilah eventually cracked, and laughed in my face, her crooked, tobacco stained teeth dancing away in her large mouth.

Jamila gestured at me to shut my eyes. Just when I thought the experience was coming to a soothing end, Jamilah dumped the entire bucket of cold water over my head, shaking me out of my wits. Gasping for air, I scrambled to push my wet hair away from my forehead, looking at Jamilah, feeling utterly betrayed. She bent over, put everything back into the basket, threw a towel in my face and walked away.

I looked around the hammam one more time. The women smiled at me for a short while, and then carried on their bathing business for the day. Jamilah walked me back to the entrance and handed me all my belongings. As I was changing she held out her palm, gesturing toward my handbag. I took out another fistful of notes and popped them into her hands, watching her stuff them into her bra again.

As I was leaving she came over, grabbed my face and kissed both my cheeks like an overprotective mother. I walked out in a daze, I was greeted by Ahmad at the entrance of the hammam, exactly where I had left him.

His face broke into a smile.

‘How are you doing, sister Mariam? How was your spa?’

The next day I looked up popular Chefcaouen spas on Tripadvisor and made reservations at one frequented by foreign travellers.

The property was as beautiful: sprawling pools, Eucalyptus infused steam rooms and Moroccan tea flowing flowing from of gold and red containers. The staff were running back and forth with plush towels, lemon-zested water and credit card machines. I was guided into a quiet hammam where I lay on a cold, marble bench while two young Moroccan women scrubbed me with world renowned beauty products whose names I could not even pronounce. Candles were lit along the walls. The aromas emitting from the incense holders were nothing short of divine.

Yet, for all this luxury, I couldn’t help but feel a little bored. After all, the situation was predictable. I knew the attendants would first scrub me and then rub some oil into my skin, and eventually deposit me near a pool or a green lawn with a variety of organic health foods, smoothies and teas.

My experience at the local hammam the day before was perhaps not as pleasant or as relaxing but it was an experience I will never forget. You can’t put a price on that.