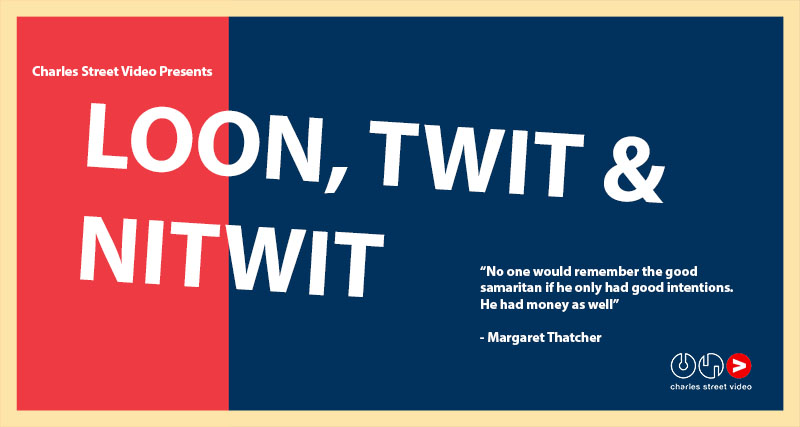 Deadline for submissions is July 22nd at Midnight 12 am

Charles Street Video is hosting a hilarious, political exhibition focusing on the ways in which political agendas and their messages are conveyed through media. The title, “Loon, Twit and Nitwit” comes from research published in 2014 by Oxford New Monitor Corpus on derogatory terms most commonly used by leftist politicians to describe their rightwing counterparts. We are holding a call for submissions for any video/ mixed media work that focuses on the dissemination of political ideologies through humour. We aim to contextualize the works through focusing on the idea of the PSA and its place in the promotion of political and social conservatism. The PSA videos will range from early 1960’s propaganda, like “Boys Beware”, to PSAs with more modern approaches such as the “Consent is Like Tea” video. Our goal is to critique the origins of some dangerous stereotypes and, through humour, to derail and devalue messages of hate. In essence, we’re just being trolls.

In fostering the creation of media art, and opening up experimental and artistic dialogues, Charles Street Video hopes to encourage both emerging and established artists in our space. CSV encourages the artistic and film communities in Toronto to explore and share their ideas and visions with each other. ‘Loon, Twit and Nitwit” aims to highlight the ridiculousness of some of the messages being played out in historical and contemporary media, and propagate important creative discussions about the topic.

CSV is looking for highly political finished works, which use humour as a vehicle to illustrate a point. Whether it be a short film, video projection, VR experience, animation or spoof, we would love to incorporate your humour with our politically charged project.