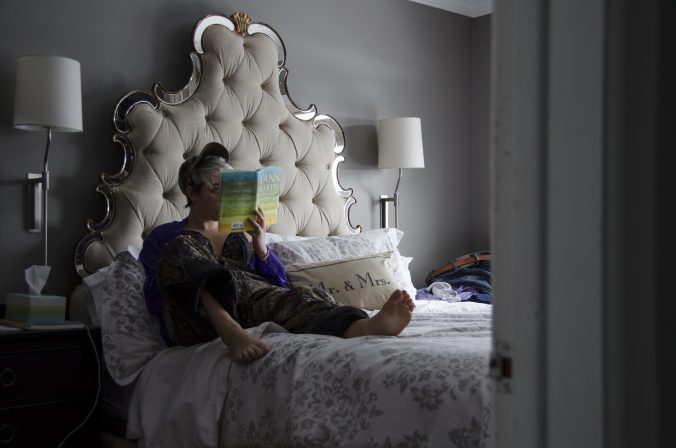 In this issue, Morgan and Lesia talk about claiming public and private spaces with our bodies, performativity in photography and the value in being a multi disciplinary artist.

Who or what are your main photographic inspirations?
A lot of my inspiration for the type of work I make comes from reading, I particularly enjoy essays, zines, and even opinion pieces. I read a lot of work on contemporary feminist thought, art theory and I absolutely love listening to people’s stories. It helps me to frame my own personal experiences in new ways, opening me up to new ways of approaching a problem or idea. If I’m really stuck on an idea, I try and take a long walk, visit an art gallery, or (ideally) take a nap.
.
What subject matter do you tend to spend the most time working on?
I’ve spent a lot of my time at OCAD producing work that centres around the body, and how we experience the world around us through it. My work has focused on gender identity, creating and valuing safe spaces in public and private, feminist issues, and story telling.
.
What drives you to work with that subject matter?
Private space has always been something I’ve had to negotiate and fight for in my life. Even in spaces that were delegated as mine, I often felt uncomfortable in. Home was not always a comforting place for me, and I think that has influenced my work in many ways. I’ve found physically creating a safe space for my body is really empowering, and have been playing with how to push those emotional and physical boundaries.
. 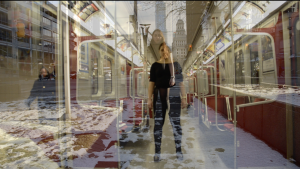 Lesia Miga, Self Portrait in Public, Video Still, 2014
~
Do you work in any other mediums and how does that inform your work?

I have experimented with many different mediums over the past 5 years, taking courses in other programs has hugely influenced the way I create and think about art. I have worked with videography, printmaking, bookbinding, drawing, painting, sculpture, installation, and have put a lot of focus on performance, as well as my photography. If I get really frustrated with a project, I find it really helpful to try and explore the same idea with a different medium. Even if it doesn’t work, sometimes I will see a solution to the first problem. If nothing ends up working, I take a nap.

You do a lot of performance work, how do you see that intersecting with your photography or video work?

After my second year of OCAD, I was feeling really bored and frustrated with my camera. I stopped taking photographs because I couldn’t find anything exciting to document, and felt that I was constantly taking the same photos over and over again, which I was. Performance and video work got me excited about the possibilities of the camera, helped me to play more, and not focus on the outcome, but on the experience of creating work. 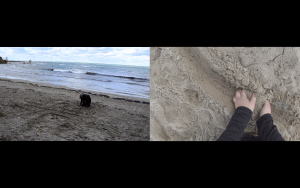 What do you think the value is in being a multi disciplinary artist and interweaving multiple mediums into your art practice?
I think it’s incredibly valuable to explore art disciplines that are out of your comfort zone, it has allowed me to grow in ways I could have never expected. In my first year of OCAD, I remember being very frustrated because I was expected to create art in mediums I was not very experienced in. Looking back I am now really grateful for this experience, it’s taught me that making mistakes is good and that art doesn’t need to be aesthetically pleasing to succeed. (Though certain art school institutions still place a LOT of value on aesthetics)
.
In your series ‘What do I want to be when I grow up?,’ you experiment with gender roles and identities. What started that series and why do you think it spurs a valuable conversation?
What do I want to be when I grow up, or WDIWTBWIGU?, began as a mix of anger, frustration, and a kind of way to laugh about gender expectations that were being placed on me. There’s always been a lot of expectation placed on me by my family to dress more feminine, and at the time that expectation was really in my face. I was getting a lot of comments from my family about how I wasn’t dressing or behaving like “a nice young woman”, and how I “wouldn’t get taken seriously if I didn’t dress more appropriately.” Then, I had some (bro) customer at work ask me “What do you want to be when you grow up?”, in the most patronizing way. I was so sick of it, so I decided to “dress like a grown up” by taking my parent’s “adult” clothing and dressing in it. This turned in to a series of self portraits in a studio, of me putting their clothes on my body in the most ridiculous and childish ways I could think of, mixing up the gender divisions in to whole new strange and silly outfits.
. 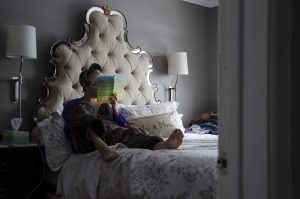 Lesia Miga, WDIWTBWIGU? Series 2, 2016
~
What body of work are you working on right now?

I’m currently working on a few projects right now, one of which is recreating the WDIWTBWIGU? series, but instead of self-portraits in a studio, I am working on photographing in my parent’s home. This work will be in an exhibition called Bed of Roses, for the 2017 Contact Festival. I’m also currently creating a body of thesis work, which focuses on public and private space, grieving, healing, and the body through performance, video, and installation. I intend to show this at Grad Ex, if I can make it through the rest of thesis in one piece!

Do you prefer working with analog or digital and what value do you see in either of those?

I really enjoy working in both analog and digital, but for very different reasons. Digital is a lot more accessible, and quick, I use it a lot for the documentation of my performance pieces, because I tend to focus more on the conceptual aspects of the piece, rather than the aesthetic. When doing straight photography, which tends to be for personal enjoyment, I love to use analog photography, particularly focusing on medium and large format photography. Photographing with film really allows me to slow down and focus on the pictures I’m taking, and I love the anticipation of developing the images. The darkroom was one of my favourite places in high school, I would often hide out during lunch and enjoy the silence and darkness, it felt very intimate and peaceful.

Are their any specific OCAD U Faculty who have influenced your work? A specific discipline or course?
There have been many faculty that have made a huge impact on my work. To name a few, Betty Julian, Johanna Householder, Ashley Scarlett’s Intro to Visual Theory was amazing and first introduced me to Zines and small press, Richard Fung, and Lee Henderson. I took a course last year in printmaking with Anthea Black called Nano Publishing, and highly recommend it, we got to participate in Canzine at the AGO in 2015, and create our own student run workshop. Another professor who I particularly appreciate is the late Wendy Coburn, who gave me a very honest and helpful critique. Basically, I tried to bull sh*t the reason I included a sculpture in a mixed media piece, and she rightfully asked if I included it just because it was a sculpture class, which I had. Lesson learned.
.

Lesia Miga, Scars 3, Mixed Media, 2016
~
What is one piece of advice you would give to someone starting out in photography?

EXPERIMENT! Don’t just stick to photography. I have learned so much more about myself and the way I create art by taking courses in other programs. There is such a vast amount of knowledge and equipment in the grey institutional walls of OCADU, it is so important to find ways to use it, and grow from it. This institution is for you. Don’t forget that. Don’t be afraid to demand change when it’s needed, and to use your voice as a student.

See Lesia’s work at the

Friday #ArtCrush is a weekly blog series highlighting students in their final year at OCAD University.

About the writer: Morgan is a fourth year photography student and runs the Friday #ArtCrush series on the OCAD U Photography Blog. She loves speaking to other artists about social justice, how to break barriers within artist communities and nurturing the arts in alternative spaces. She is the Art Director for The RUDE Collective, a student representative on the Photography Curriculum Committee and has done workshops on intersectionality and allyship relating to LGBTQ folks. To see more, you can visit her website or her instagram.