Over the summer 2014, the Office of Diversity, Equity & Sustainability Initiatives worked with OCAD U Students Rouzbeh Akhbari and Behrad, to create wood sculptures to share with incoming students and faculty during Fall Orientation. They were tasked with a challenging project: to come up with an object that conveyed the concepts of sustainability, diversity & equity through its structure or function, could be scaled to 1000 hand-crafted pieces, and was different from the usual orientation week ‘promo’ item. We reached out to Rouzbeh and Behrad to tell us more about the project. 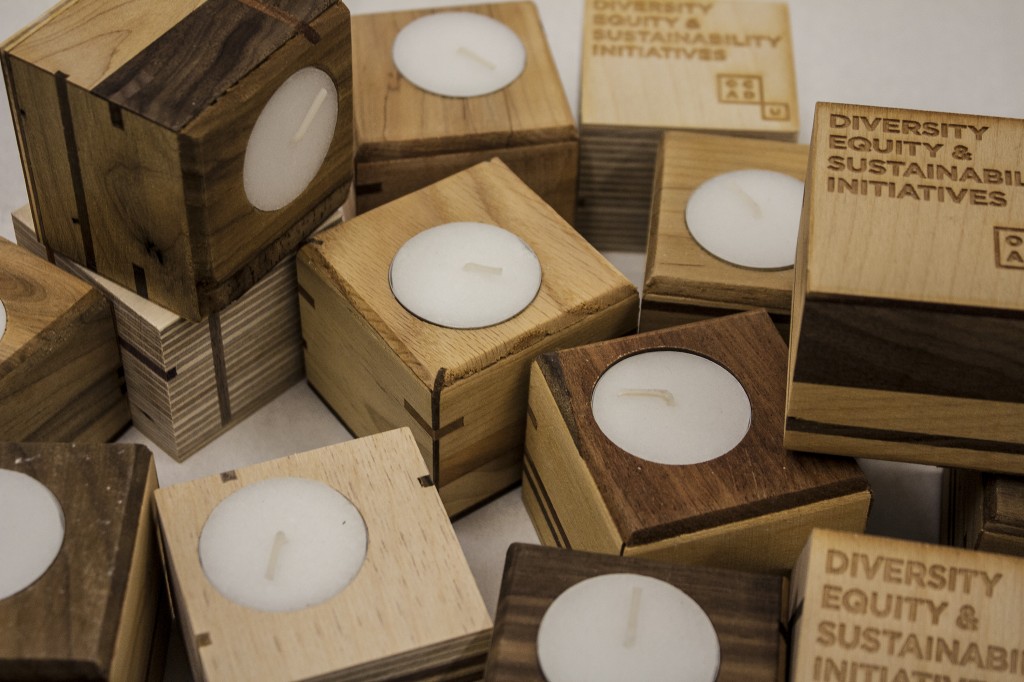 “New ways of retelling an already established narrative, of course, is precisely the intersection of political resistance and social allegories that we explore in these objects.”

SITE-SPECIFIC: How did you come up with the concept for the wooden cubes and how does that narrative connect to concepts of equity, diversity and sustainability?

ROUZBEH AKHBARI: The idea of re-purposing scrap wood came from a constant exposure to a culture of recycling and reusing that is prominently exercised in our studio in OCAD U. Lisa Hampton, the class assistant in the wood shop, has formed a fascinating practice that revolves closely around the obsessive acquisition of wooden off cuts and creating meticulously designed furniture and objects of art that contain a collective narrative. Her continuous encouragement for all the students, including both of us, to think more critically about issues around sustainability and waste management resulted in a form of awareness that positively informed our individual practices. When we were tasked to create a series of objects that could potentially be fabricated in large quantities, tie the notions of diversity and sustainability together and hold some sort of functional value we immediately thought of the common point in our practices, which is essentially the notion of handling disregarded or rejected materials in ways that facilitate the production of objects that tell new narratives by re-contextualizing old ones.

“To bring all these pieces together again in new compositional forms allows for a fresh way of looking at the “unwanted” and the “unseen” as they rearrange and historicize their original referent (that being the original project/piece they came from) within a totally separate context.”

New ways of retelling an already established narrative, of course, is precisely the intersection of political resistance and social allegories that we explore in these objects. Metaphorically speaking, when one looks at a pile of various species of wooden off cuts, it is quite easy to respond to it as simply put “just a pile of scraps,” which instantly subjects all these materials to a certain set of value systems and assumptions about their significance in the bigger economic scheme. They are almost always overlooked and thought of as an alternative option with complete disregard for the conceptual significance they carry, especially as rejected parts of other individual’s art pieces. To bring all these pieces together again in new compositional forms allows for a fresh way of looking at the “unwanted” and the “unseen” as they rearrange and historicize their original referent (that being the original project/piece they came from) within a totally separate context. That conceptual approach of analyzing and interpreting materials in connection to the way knowledge, narratives and histories are constructed is mainly what we intend the audience to receive from looking at these objects. 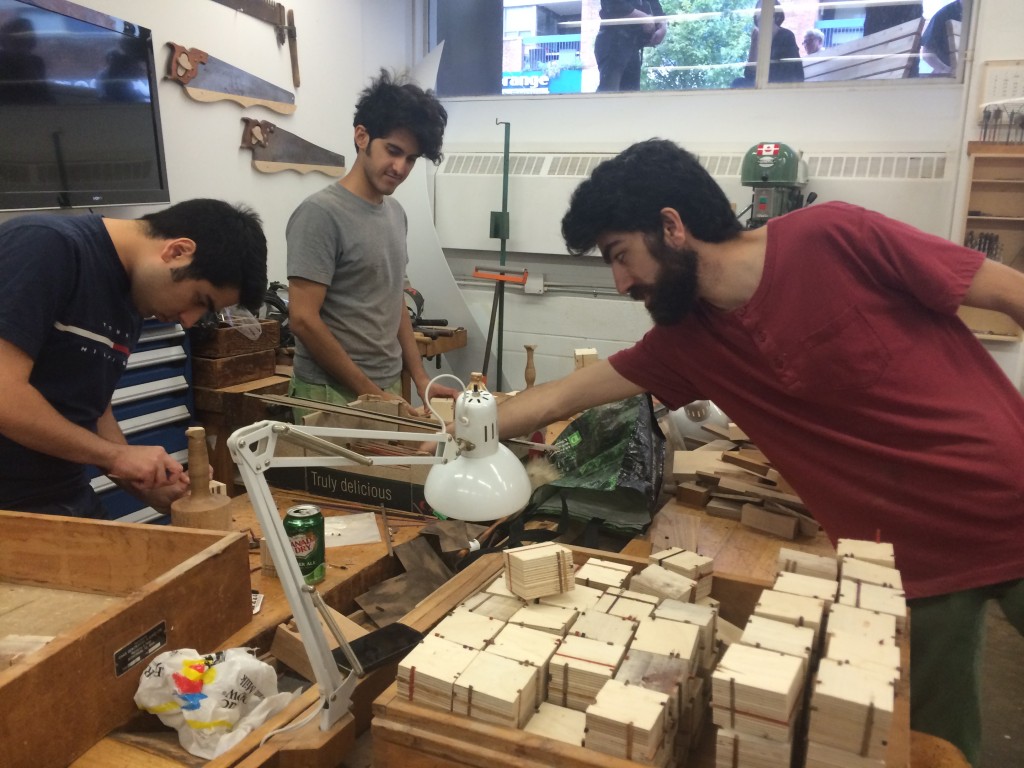 S: How did you create 1000 individual hand-crafted pieces within less than two weeks?

A: To be frank, that required a tremendous amount of time dedicated to planning and figuring out the logistics before we began with even touching any physical material. After all the details were laid out in front of us we spent couple of hours constructing a few jigs, which functioned mostly as moulds for gluing up smaller pieces to fabricate bigger chunks that were more easily workable on heavy machinery. After the lamination process was actualized, all the pieces were mitered and prepared for a series of glue ups that took about 5 days to finish. To put it briefly, the whole process was a time-consuming repetition of cuttings and gluing back that allowed us to move from small off cuts to larger lumber and back to small cubes that were very close to the final results that we envisioned. After the structural construction of the cubes, we spent a few days working on the decorative inlays and sanding that lead us to the last step, which was finishing.

S: What type of significance do the materials in this project have?

BEHRAD: As wood ages, it oxidizes and gains a very pleasant patina. This chemical reaction commonly caused by exposure to UV rays of sunlight enhances the grain of the wood. The grain carries a lot of information and history about the wood and particularly the tree it came from. We have a great responsibility regarding the use of this precious material; we give it a second life after it is cut down from the forest. We build houses, sculptures, furniture, and musical instruments and in doing so we end up with lots of small pieces of scrap which usually get thrown out. These scraps have an intriguing history, value, and narrative behind them. Not only do they tell us about the wood itself but also the project it was used in, and the individual story of the person using it.

In my practice as a luthier, I traverse the globe to find the different pieces of wood, used in the construction of a musical instrument. From local softwoods to foreign hardwoods, from Europe to Africa, Asia, and South America, I get to work with many different species of wood. These diverse materials working together to become one, the musical instrument, is a very similar representation of our community. Every one of us no matter how big or small has influences that directly impact our community as a whole.

We source a lot of our materials from OCAD U’s wood waste bins. Some of them are scraps from student work and some of them are from faculty. I occasionally get a chance to visit master guitar makers and woodworkers in their shops both in Canada and abroad and every chance I get I ask them for any leftover pieces. In this particular project we have used scraps collected from master luthiers Philip Davis, Sergei De Jonge, and Joshia De Jonge.

“These scraps have an intriguing history, value, and narrative behind them. Not only do they tell us about the wood itself but also the project it was used in, and the individual story of the person using it.” 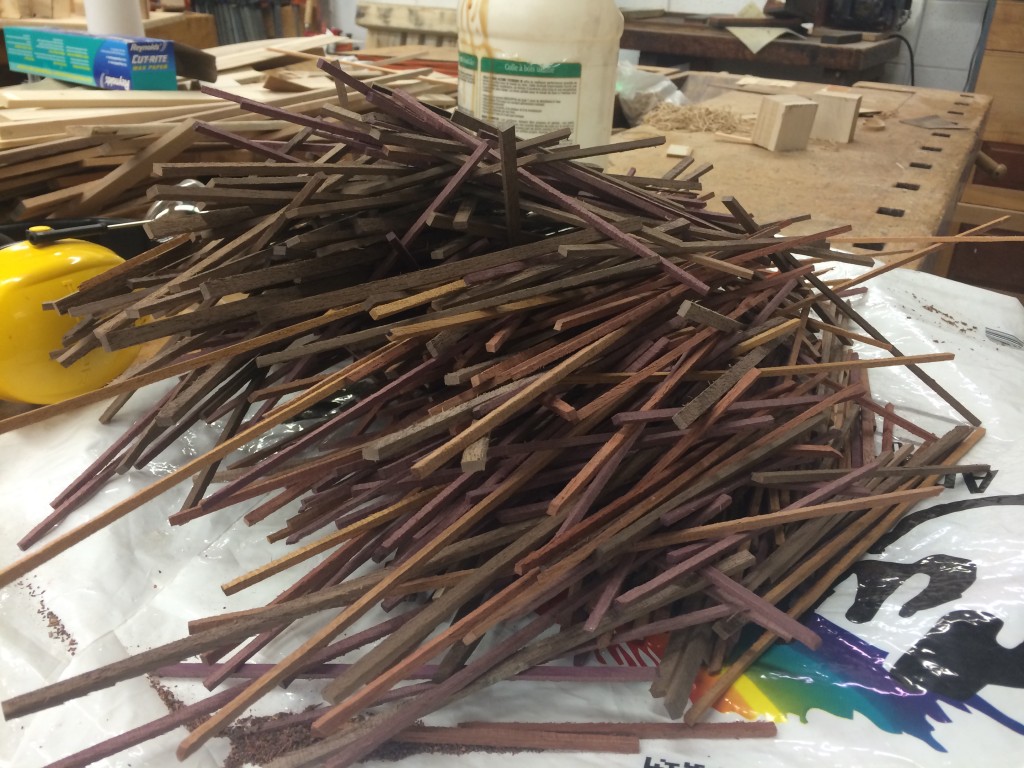 S: What other projects have your recently been involved in, or have coming up soon?

A: At the end of last month I finished a public intervention dedicated to re-looking at the history of the Second Boer War. It was entitled Centre for Counter-Monumental Activities and was essentially a museum-like structured that was attached to the tallest monument in Toronto at the intersection of University Ave and Queen St West. It held a temporary exhibition of a series of poems written by a South African concentration camp survivor during the imperialist invasion by the name of C. Louise Leibolt, until the work was removed by the city staff 28 hours after its installation. The problematic insistence on the glorification of battles that later serve the function of strategic nation-building utilized by neoliberal political agendas is exactly what makes such resistive moves subject to the extreme scrutiny of the police state.

B: Currently I’m in the process of putting a book together about my musical instruments. It started as my graphic design thesis project two years ago and since then I have been documenting my work, and collecting information. The idea behind this project started as the need to create a diary for my personal use and a source to get back to in the future and evaluate my current skill level. 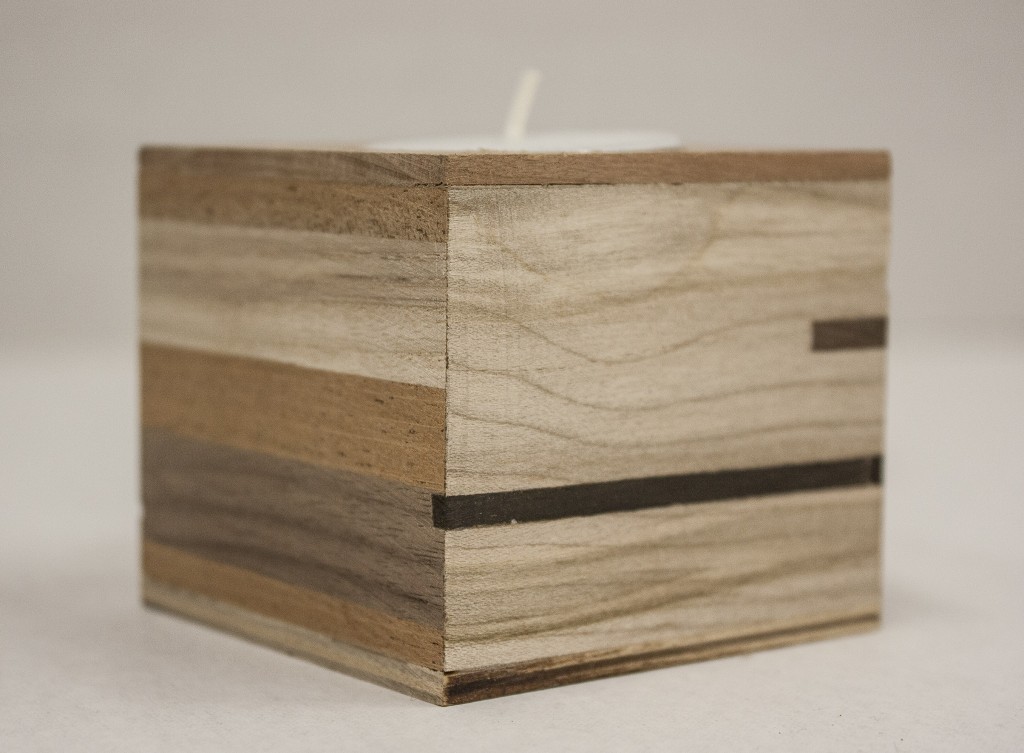 S: What is the role of creativity in advancing equity?

A: The very notion of equity in my mind is closely intertwined with the definition of positive freedoms, social independence and the modes of operation that subjectivities employ in the grander societal structures. Keeping that in mind, I believe to reach an equal state of existence as individuals requires a constant negotiation of power between subjectivities and collective institutions that are, at least in theory, constructed to protect private property (i.e. the state, the banks, etc.). This negotiation translates into an everyday struggle where creativity in developing new forms or strategies of resistance could potentially give the upper hand to those who are historically or systematically invisiblized and pushed to the margins. In other words, it allows those layers of the society that are generally buried under the oppression of everyday’s routine of survival to generate a paradigmatic shift that decentralizes power away from those that are known to monopolize it, and dispersing it towards the communities and identities that are in fact the reality of our diverse social fabric.

A special thanks to Studio Facilities, particularly the Rapid Prototyping Centre for supporting this project.