In late March OCAD University’s Dorothy H. Hoover library hosted the Art+Feminism Wikipedia Edit-a-thon. Now that the dust from the keystrokes has settled we’re getting caught up with Sarah Butterill, Reference Intern at the Dorothy H. Hoover Library who organised the Edit-a-thon along with fellow participants and editors Mary Katherine Mcintyre and Zeesy Powers.

[Image description: black and white image of a woman calling out the word ‘edit’, written atop a stylized megaphone]

SITE-SPECIFIC: What was the Art+Feminism Wikipedia Edit-a-thon and what was the idea behind it?

SARAH BUTTERILL: The Art + Feminism Wikipedia Edit-a-thon was an event that we held here at the OCAD library on Saturday, March 22nd, 2014. It was a follow-up to a larger, international event that happened in February, organized by a group of activists in New York (more information here). On that day, hundreds of volunteers at dozens of events around the world (often in art school libraries) gathered to teach each other how to create and edit Wikipedia articles and added more than 100 women artists to Wikipedia, in an effort to make up for gender imbalances in Wikipedia coverage and in Wikipedia writers/editors.

On that day in February, one of the international satellite events took place here in Toronto, at Art Metropole. The women who organized that event, artists Amy Lam and Ella Dawn McGeogh, later approached me about hosting future edit-a-thons here at the library, in order to continue the work of that day and make use of the library’s resources for the project. Everyone at the library loved the idea, and we were really happy to be able to introduce the OCAD community to the project and get students involved. It was also exciting for participants to have access to our collections and databases. We began the event with a tutorial about Wikipedia and then spent the rest of the afternoon working on articles about women artists who either have bare-bones Wikipedia pages or do not have Wikipedia pages at all. In many cases it’s surprising which artists don’t have pages. For example, Toronto artists Diane Borsato, Tanya Mars, and the collective FASTWÜRMS have entire books published about them, but do not yet have Wikipedia pages.

SITE-SPECIFIC: What interested you about the Art+Feminism Wikipedia Edit-a-thon and why did you participate?

MARY KATHERINE MCINTYRE: This past semester I took a 3rd year course called Cross-Cultural Currents in Craft (VISC 3B41). The first assignment was to research and write a Wiki for a craft-related subject not already published on Wikipedia. The meta-purpose of the assignment was to make us aware of the fact that relatively few women artists, and literally only a handful of women in craft practice, are represented on Wikipedia. When OCAD announced an Edit-a-thon at the Library, I saw this as a perfect opportunity to see if I could actually get published the article I wrote for class, on the Canadian silversmith and educator Lois Etherington Betteridge.

ZEESY POWERS: I love Wikipedia, and use it regularly as a starting point for research in a wide variety of topics. The lack of representation for women artists (not to mention women scientists, authors, etc.) is a big problem, especially as the initial stages of research shift to online formats. The content available on Wikipedia is entirely volunteer-generated, so if you see there is a gap in representation and you don’t do anything about it, there is a good chance that that gap will be perpetuated.

“I think the questions raised by the event are ones that we can always apply to our cultures/sub-cultures, such as who is overlooked and why? Who and what is celebrated or challenged? Who is writing the articles?”

END_OF_DOCUMENT_TOKEN_TO_BE_REPLACED

Renzi Guarin is an AV Support Specialist through the IT Services Department at OCAD University.

SITE-SPECIFIC: Tell us about what you do here at OCAD University.

RENZI GUARIN: Our office deals with the circulation of audio and visual equipment for faculty, administrative staff and students.  We ensure that the faculty have the technology to help them teach effectively in our classrooms and that admin staff are properly prepared with tools to aid them with hosting meetings, seminars and in carrying out the day to day operations of the University.  For students, we offer a variety of equipment and services to facilitate their creative projects and curriculum work throughout the year.

Part of my job is to oversee the audio-visual and technology aspects of special events for OCAD University.  In the past couple of years, we’ve worked on various events providing AV support where accessible technology is involved.  Most recently, OCAD U hosted the 3rd Accessibility Camp Toronto conference, an event centered on assistive technology with workshops and seminars regarding the landscape of inclusive and accessible design.

” Whether it is a guest speaker, an exhibition opening, a town hall meeting or even a lecture in a classroom; If everyone is able to come away with the opportunity to become inspired, informed or educated then I think we’ve done our job.” 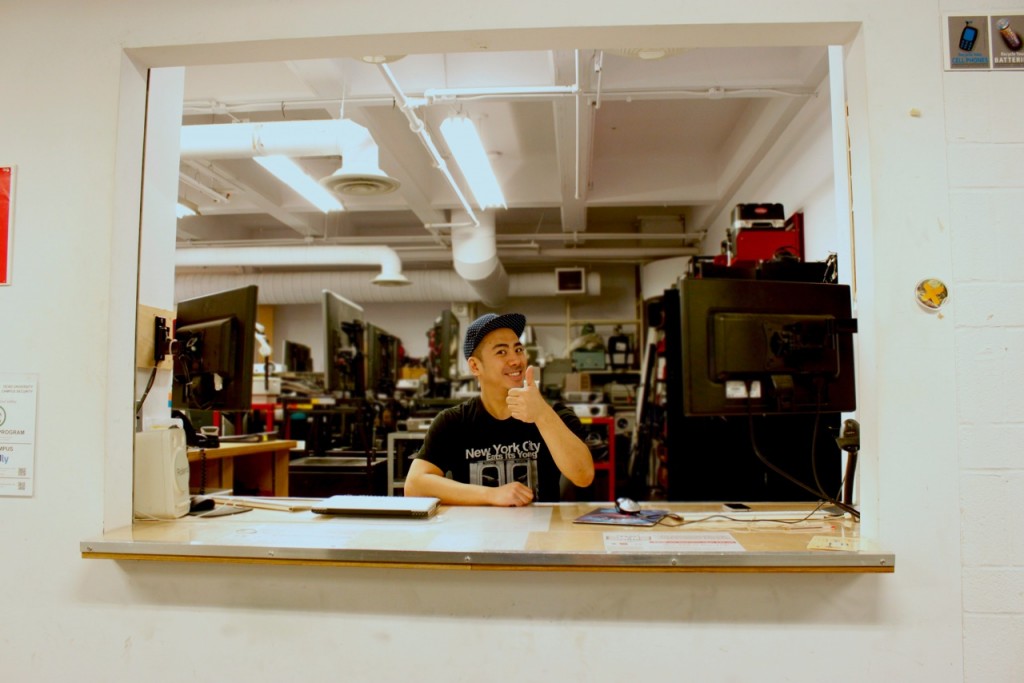 S: Some people differentiate between accessible media and all other media. You seem to work from the premise that all media is accessible with some ingenuity. Can you comment?

G: Whether it is a Guest speaker, an exhibition opening, a town hall meeting or even a lecture in a classroom; If everyone is able to come away with the opportunity to become inspired, informed or educated then I think we’ve done our job. Ultimately it should be the goal of anyone who organizes an event on campus to see accessibility included in the initial planning stages of the event rather than an after thought or on a case by case basis.  For event organizers, there might be hesitation when thinking about the complications that might arise when including things like ASL interpreters or captioning services, but I think that it is up to us to take that challenge head on and just find a way to be able to provide appropriate alternatives for any setup that is required or asked for.