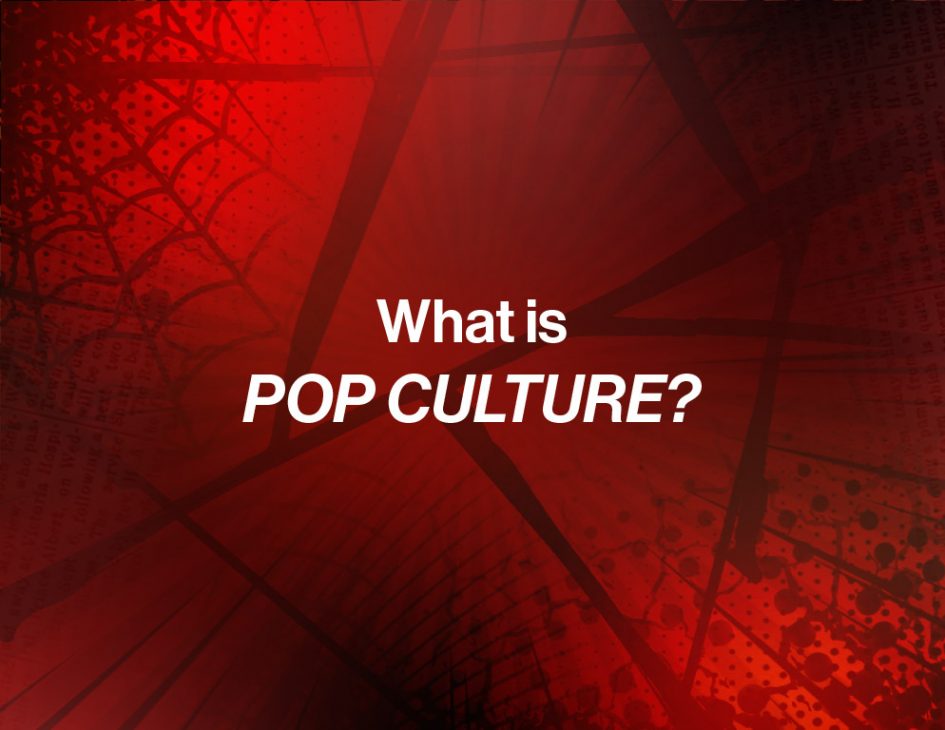 Typography is seen everywhere. Your house, the streets, in stores, in newspapers, on television and pretty much every other place in the world you can think of. In today’s day and age of technology, some of the main sources of typography that are widely known are through movies, tv shows, and video games. Even though not all people or are necessarily into these things, pop culture means that it’s become so popular, its reached out to multiple demographic in some way shape or form. In typography, pop culture can be certain font families or glyphs. Many brands and companies often have trademarked fonts that are globally recognized by just a few letters or glyphs that are associated with them. Within tv shows, movies and video games, often there’s some type of identifier that you associate with the subject. This can include symbols or fonts. This site will take you through movies, tv shows and video games that are considered Pop culture in our society that exemplify unique typography and/or identifiers.

What Is Pop Culture?

Pop culture can be described as many things. You could say it’s things that are popular in today’s society, things that a large group of people know about, or even something that is globally recognized. It can be a set of beliefs, practices, or objects that are dominant in society. Though most people often associate pop culture with things that are new and hip with younger aged people, such as Instagram and Tiktok that’s not to say that things that went out of style can’t make a comeback from decades ago and become popular again. Though pop culture can largely differ from one community to another and in multiple locations. For example, the Canadian culture of watching the winter Olympics is not going to be a well known activity for someone who lives in Australia where there is no snow. Pop culture can also be thought about as things that are “trending”. This means that something is either new and popular within a community or something has come back into style that was once all the rage (i.e. scrunchies). Overall, pop culture is really in the eye of the beholder as to what they would consider “popular”.

“Your choice of typeface is as important as what you do with it.”

In pop culture, movies play a huge role in displaying beautiful and unforgettable films. It brings back tons of memories when friends or family watch their favourite and trending movies. Movies bring people together and build stronger connections between each other. When families watch holiday movies, it keeps the family together and joyful and when friends watch trending actions or love movies, it keeps their friendship stay bond. Both trending movies, Ghostbusters 1984 and Harry Potter 2001, will always remain in people’s memories. Both movies are classic films compared to all the other ones. Some fun facts about Ghostbusters, Dan Aykroyd found inspiration for the movie from his family’s history because he grew up surrounded by spiritualists. The movie is filled with magic, the visual effects team had to be creative and brainstorm a lot on set in order to get specific shots. At one point, a green, spray painted peanut was used for the character Slimer to get a shot of the ghost in a hotel scene, spinning like a chandelier. In the end, the result was quick and blurry, but they still put it together in the final cut of the film. To continue with another fun fact about Harry Potter, Richard Harris had trouble remembering his lines, so Daniel Radcliffe would ask him to help with running his lines just so he could practice more. And lastly, Emma Watson has stated that she hates the way her hair looks in Harry Potter 2001. In the following movies, her hair was purposely made less bushy and wavier. Both movies have magical creativity, and this was part of the reason why it appealed to the audience, mainly the fun facts came from the actors/actresses that will affect the final piece. Therefore, it is very important for companies to choose wisely with their workers.

Tv shows are known for something we can entertain with family and friends to watch during break time. Throughout the tv show pop-culture, there were and still have trending tv show shows that are on going like, Stranger Things in 2016 and The Simpsons in 1989. Some fun facts about Stranger Things, it’s based on a real time travel project based on real conspiracy theories that alleges with the United States government trying to oversee realistic experiments on children. Another fun fact, in the present it is called the “Montauk Project”, the show was originally called Montauk. Adding on, some fun facts about The Simpsons, Matt Groening created the show, the characters, and names based on his own family members. Another fun fact, Bart is voiced by a woman, Nancy Cartwright. In an opening sequence during the show’s second season, Bart wrote on the chalkboard, “I am not a 32-year-old woman” (Cartwright’s age at the time). Both of these tv shows have their own unique fun facts and that is what makes them trend in pop-culture.

Video games are to be enjoyed by yourself, or with a group of family and friends, when the choice is being played in your head. Video games are well known to be enjoyed by many, starring Minecraft 2009. It is well-known for creating buildings around your own “world” while having the option of cooperating with others. Another trending video game was Mario 1983, it is known as a hero saving the day and destroying evil. There are some fun facts about Minecraft, it was at 100 million copies in June 2016 and in February 2017, it reached 122 million copies across all platforms. This means 22 million bought Minecraft within 9 months which is insanely impressive. Adding on, Minecraft was almost called a “cave game” due to the design and colour choice of each location. With other fun facts about Mario, Mario was originally a carpenter, not a plumber, and he also appeared as a doctor in the 1990 puzzle title for Dr. Mario and its sequels. Mario is also shown to be a carpenter and has a pet ape named Donkey Kong. Mario then mistreats Donkey Kong, resulting in his escape to kidnap Mario’s girlfriend, originally known as “the Lady”, later on renamed to “Pauline”. Both video games allowed the players to build experiences in different settings and both games create a set for the character to have their own style and stories behind it. This was part of the reason why it is trending in pop culture; it attracts younger audiences to be cooperative with others or be a hero to save the day.

There are a variety of companies in society expecting the typographic designers to be creative and design their projects by creating names relating to their theme and topic. In general, designers build beyond their creativity towards their piece and create an initial thought of the product. All three topics of tv shows, movies, and video games have their own style and creativity catch the eye of their audience. The tv show, The Simpsons, trends in pop culture due to the humorist creativity in the characters. The movie Harry Potter became very famous due to their creativity with magic and visual effects. Lastly the video game Minecraft quickly became trending for many years due the creativity of allowing the players to explore and build their thoughts and expressing their artistic talent through a game. The typographic designers appeal to the audiences and create designs based on the difference in people’s ages. When the product is not appealing, it will not be part of pop culture, instead the companies will lose profit and possibly shut down. Many will compare an old classic tv show, movie, or video game to an upgraded or a clone version of the piece. If the newest version can not trend as quickly and appeals to as many people, then the company will never surpass the original piece. Tv shows and movies are changing every year and video games are getting more addicting and complex, and this is how companies make profit from the audience by creating a piece that attracts individuals. 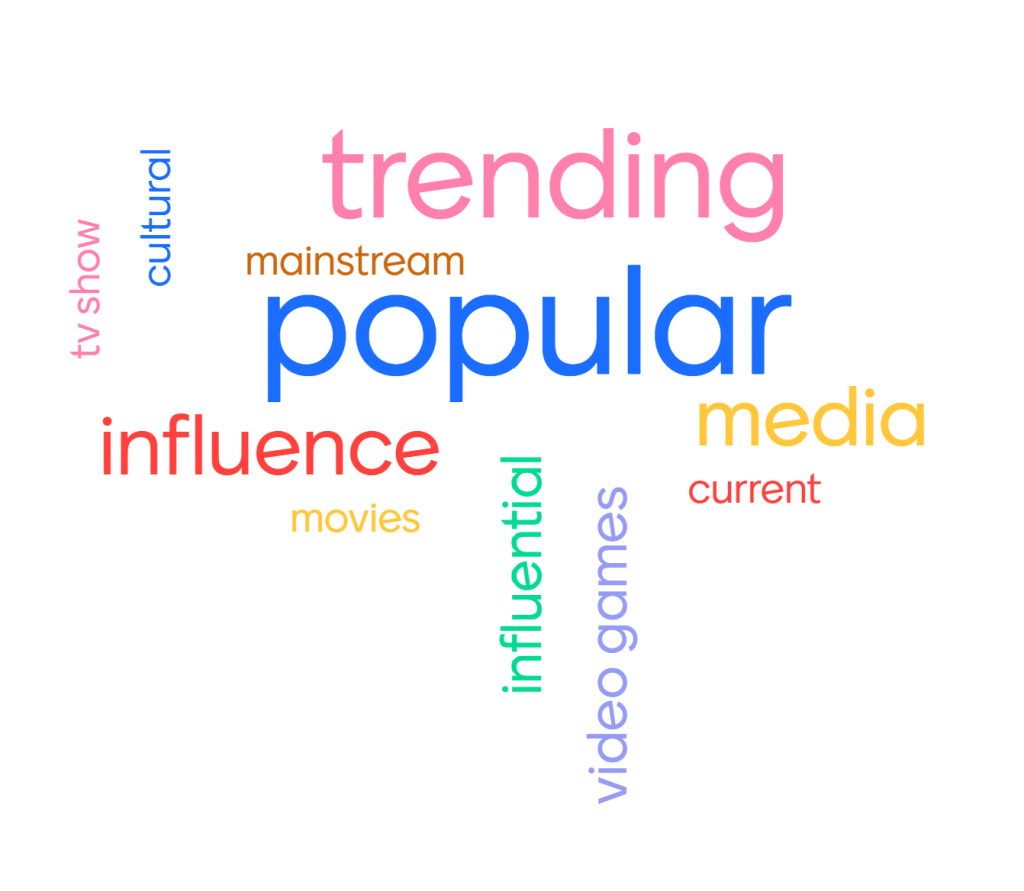