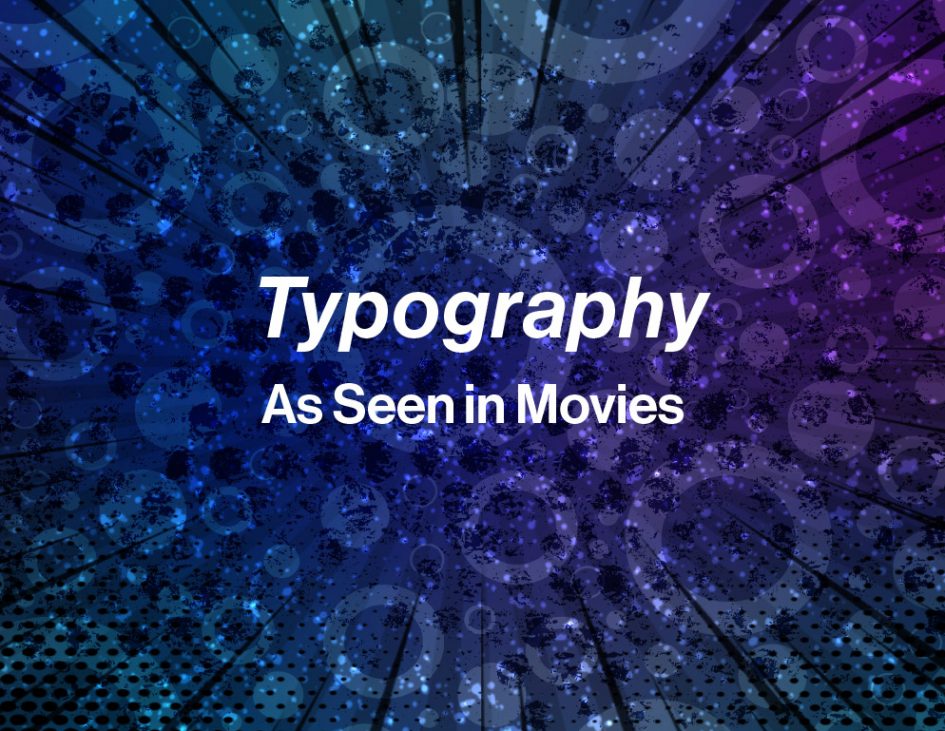 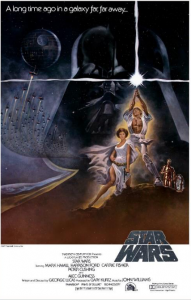 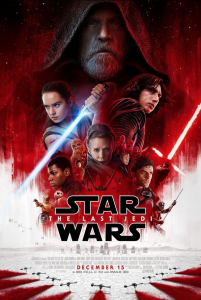 Star Wars is an adventurous sci-fi movie about an ‘orphan’ boy named Luke Skywalker who saves the universe. Starting in 1977 and continuing until 2019, this movie saga created advertisement posters that, overtime, show the importance typography has on the overall layout of a movie poster. It demonstrates how a custom typeface can capture the viewer alongside the imagery on the poster and puts an emphasis on the genre of the movie. Before the current typeface we have now, the words Star Wars were seen as a slanted boxy type. Tom Jung, the designer of the first Star Wars movie poster, had created a layout that focused on the imagery over the typography which caused it to get lost. Not only did he push the type to the side but, “the film title [was] nowhere to be found,” (Zijlstra 2015) on the poster. This comes to show how important copy can be as it can make or break an advertisement, not just the image. George Lucas, understanding that the main type of their franchise was being lost amongst the “fan art [style]” (Zijlstra 2015) imagery, decided that it needed to change. Due to a low budget and a small amount of time, George Lucas came up with a rough idea for their logo, which was based off of the Helvetica typeface (Jay 2013), and began cutting out letters and placing them on black board. A sense of mystery had been created in the typeface because the letterforms had been hollowed out, leaving behind the outlines. The movie needed a futuristic and sci-fi  typeface while still looking simple and intricate so it would be easy to read. Because the custom type is simplistic, the imagery on the poster can be more vibrant on the poster and thanks to the bolder outlining, the words no longer get lost among the other elements.  By connecting the typeface to the genre of the movie, a sense of unity and consistency is created and gives the audience another view on what to expect; something slick, different yet bold and exciting. 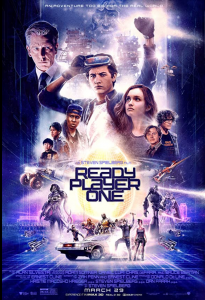 When first looked at, the theatrical release poster for Ready Player One appears to be something that you would see on the cover of a paperback sci-fi book from the 1980s. This is intentional as there are lots of pop culture references to books, movies or games. A few examples are The Shining, The Iron Giant and Back to the Future. The title of the movie is in the middle of the poster which is also the lightest part of the poster. The title of the movie was designed to be a maze. This maze connects to the plot of the movie to find the “Easter Egg”. The title is a working maze which starts at the R. If you follow it through the letters correctly, you will find yourself in the middle of the O where there is a little egg. The typography used in this movie poster is very successful in combining the plot of the movie to the title of the movie. 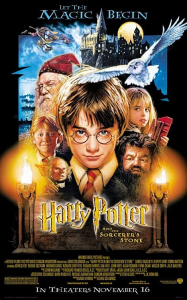 Harry Potter, a classical fantasy favorite, is a story about a boy who becomes a wizard and saves the world. Throughout the years of the saga, 2001 through 2011, the customer typeface stays the same. The book and movie have an older more rustic theme to them which is shown through the lack of high end technology used in the main school of Hogwarts. By creating a typeface for this franchise that is not modern, a connection between the time of the movie is made. This iconic type had been “based on [a] sixteenth-century,” (Smith 2007) Garamond typeface and was later tweaked on by Robert Slimbach. A sense of dimension and delicacy is created by adding a metallic sheen to the typeface; it gives it an overall air of magic. Harry Potter has a lightning shaped scar on his forehead. This unique glyph is added onto the long stroke of the ‘P’ in Potter. By doing this, more contrast is created and it becomes more personalized with the character and his name. Thanks to the individuality in the typeface’s design, one can connect the two together as Harry Potter becomes known not only for children flying on brooms but this iconic font as well. 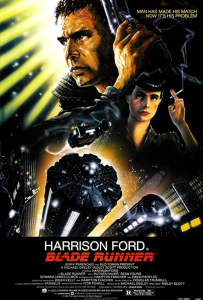 While the style of the art on the poster for the release of Blade Runner in 1982 was based on film noir style-film posters, the typography is a stark contrast. Although there are multiple versions of the poster, the final theatrical release poster utilizes two main typefaces. As the main character in the movie is played by Harrison Ford, his name is in all caps at the bottom of the poster. Under it are the words “Blade Runner” that are also in all caps. However, they are in a typeface that has a science-fiction vibe to it. There is a thin line going through the entirety of the two words—breaking them up—while still keeping them cohesive. The title of the movie is in red text while the rest of the text is white, which creates further contrast on a black background. 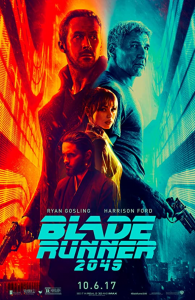 The sequel to the first Blade Runner that was released in 1982, the movie poster for this movie was quite different than the poster for the first Blade Runner. One large similarity between this poster and the one for the first Blade Runner movie is the typography. The typeface used is the same as for the movie in 1982. The major difference in this 2017 movie poster is that the name of the movie is split in three parts. Blade the first, runner is below it and 2049 is below runner. The text is centered and located in the bottom third of the overall poster. The colours used in this poster are oranges and blues. One side of the poster has a strong orange tint and the other has a strong blue tint. Furthermore, the title of the movie is in the blue colour found on the poster. Overall, the poster was able to connect back to the first movie with a modern twist. It did not stray too far but was able to modernize the poster to fit the themes of the sequel. 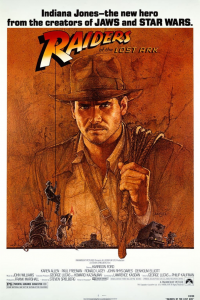 Indiana Jones is a movie, created in 1981 and ends in 2008, about an archaeologist who goes across the globe saving different rare artifacts and returning them to museums because “[that’s where] they belong,” (Sherlock 2020). The overall poster has a hand drawn feeling to it so Mike Salisbury, the designer of the iconic movie type, knew he needed to create something that would stand out amongst the other busier elements of the page. Taking different elements from the typeface Fedora, Salisbury created an iconic type that connected nicely to the adventurous nature of the main character and the genre of the movie. The curve of the typeface adds a sense of movement that lets the viewer know that the movie is jam packed with action. Many of the scenes in the movie have a torch of fire as a prop which brings out another consistent element to the branding of the type. Because the imagery of the older posters were dull, having the typography in bright fire themed colours allows it to stand out and catch the eye. Later on, the typeface was applied to the name of the franchise, Indian Jones, which allowed the viewer to know more specifically who they were going to see.

Back to the Future 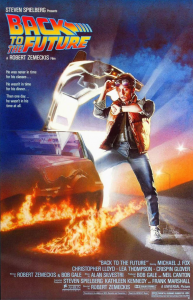 Back to the Future, which was released in 1985 until 1990, is a  sci-fi movie about a boy named Marty who goes into the past with the help of Dr. Brown to change his future for the better. The movie was done exquisitely that it had been recognized by the United States Library of Congress who agreed that it was “culturally, historically [and] aesthetically significant enough to be preserved for all time in the National Film Registry,” (Shail 2010) which makes this movie an important example for years to come. Looking at the personalized typeface a futuristic element is added which adds to the genre of the movie. By using a bold sans serif type, a more modern feeling is created which relates to the overall plot of the movie. Having the typeface in an italicized stance creates the motion of going back in time with the movie characters. The added glyph of the arrow that fits in nicely with the ‘K’ of the word back gives an emphasis that the movie is taking you back in time. Adding a gradient of colour to the type, a more technological futuristic aura and matches with the flames on the poster which create another feeling of movement and action.

Smith, Fran. Adobe Garamond in the Harry Potter Books – Not a Character but a Font, 8 July 2007, cei.org/blog/adobe-garamond-in-the-harry-potter-books-not-a-character-but-a-font/.