The evolution of Chinese currency jumps into a new stage during the contemporary era in mainland China. The first series of Renminbi is introduced during the Chinese Civil War, first published in 1948 December 1. The first series of Renminbi is issued by the People’s Bank of China, the headline of the banknote is the title name of People’s Bank of China “中国人民银行“ in traditional Chinese. The calligraphy writing of the headline is presented by the prime minister of the communist government, Dong bi wu. Dong bi wu choose to write the headline within Regular Script style. After the Qing Dynasty, Regular script had reached its termination in development. The attention of calligraphy style shifts in transition to focus more on functional communication rather than aesthetics form of writing. 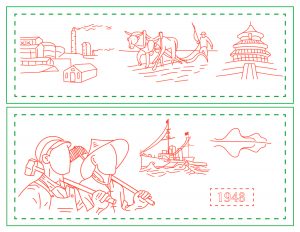 Due to the unsteady political situation, the battle between the Communists and Nationalists got heat up to its climax in the mid-twentieth century. In 1948, the communist overcome several battles in northern China, succeed in regional emancipation of the northern region. To adapt single currency used in regions, in the same year, the Communist Government set up the People’s Bank of China in Shijiazhuang, Hebei province in the North China plain. Initially, the publication of the first series is disorganized in regions, the banknote’s issue and circulation follow along with the communist’s emancipation route. The published Renminbi has 12 basic units for currency denomination, 62 editions of banknotes distinguished in different regions. In certain regions, the banknotes had been published in the ethnic minority’s cultural language. Especially in the autonomous regions, Xinjiang and Inner Mongolia issued banknotes in Uyghurs and Mongol language, printed along with Standard Chinese. The banknotes are expected to be wishful to bring peace to settle down the warfare in mainland China. So the printed elements depicted scenes of natural landscapes, agriculture, public transportation, and industrial developments that are relevant to the public space in mainland China. The banknote image the hopeful construction of the society in development.

The first series of Renminbi brings significant positive influence for the communist in the Chinses Civil War and the formation of the“ Republic of China” push the economic development of manufacture in mainland China. The establishment of The People’s Republic of China in 1949 speed up the unification of the Chinese currency system. The released banknotes replace the circulated regional currency. Furthermore, the new currency system fixed the high exchange rate in the domestic trade market, accelerate the industrial development of manufacture to allow simplified and convenient merchandise transactions to more independent of imported manufactured goods.