The original metal coins, which are easier to handle by the use of strings, were deemed as a standard currency since the Qin dynasty. Because of the massive use of metal, such as silver and copper, which increases the durability and acceptability of the coins, as well as their anti-counterfeiters ability. But there is just one problem – a rich man during this time would have had a huge

problem to carry the heavy burden of his coins. This is where “Jiaozi” comes in. It’s basically like a cheque, which people deposit their coins in these “Jiaozi” and be given the paper notes. Soon, this method was proven to be efficient and became popular in civil. After “Jiaozi”’s success, the Song government began issuing their version of the paper notes as a legal currency. Thus, the world’s first official paper money came out.

So far, the earliest piece of the Jiaozi printing plate was found made in copper, the length is 16cm, and the width is 9.1cm. The upper part of the inscription “除四川外許於諸路州縣公私從便主管並同見錢七百七十陌流轉行使”, which means “this unit could be used anywhere except Sichuan province”. The lower part engraved with the house, characters, and bags of packaging, and three people are outside the house to carry the goods away.

Jiaozi is composed of two parts, including pictures and texts, divided into sections, which are not very neat. The content of the picture includes the figure painting and some stripes or symbolic decoration, including the images of metal coins. The portrait of the figure below is well balanced with thin and even lines. The details are handled very carefully, and the picture image is realistic. The characters are arranged vertically, with 29 characters from right to left, with small word spacing and large line spacing. During the Northern Song Dynasty, the fonts used were regular scripts. The typography was not very neat and beautiful, it is clear that they were writing by hand. But it was difficult to imitate and not easy to counterfeit. The metal coins and the texts make up about half of the page, while the next section is filled with portraits of houses with an even layout and a sense of balance. 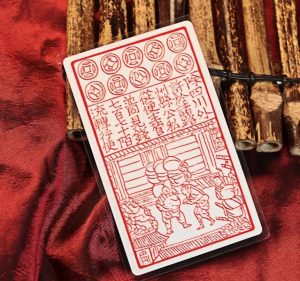