Women and Branding in 1960s 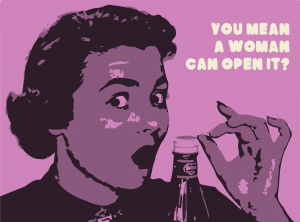 Recreation of an actual 1960s AD from Alcoa Aluminium.
Finally bottle cap that woman can open without man’s help!

In 1960-s advertising business was booming. A few aspects helped brands and their marketing teams achieve great success and become popular at the time. One of this aspects was that television advertising became widely available and now it was easier than ever to reach out to your targeted audience. The other was the change in society and big changes in gender roles and norms. In my part of this group project I would like to discuss those changes and see how women affected brands and their advertising in the 1960s.

The sixties was the decade of contrasts and transformations that led to cultural changes in America. Gender roles had shifted (slightly, but at the time it was huge change). Females were offered a lot more opportunities. One of the opportunities was official, paid jobs. Women were only receiving about 60% of what an average man would get but it was better than nothing and gave women purpose other than housework. Women started to get paid and go out more. Now they had financial means to support themselves. Ability to support themselves meant they can afford to buy things without asking husband first. This created whole new demographic for advertisement and design. We can see more ads being targeted towards women and more feminine designs are used to to attract new buyers. We also see a lot of empowering borderline dare I say even feminist campaign making appearing in magazines and TV. (Walsh)

Probably even more important than getting a job was getting a choice of whether or not woman wanted to have a child. In the beginning of 1960s the government approved a first birth control pill. This gave females more freedom then ever before. Introduction of Evovid (the pill) was a major event in both social life and advertising. Women got more control and brands wanted to get their attention even more now. The idea of a perfect housewife was cracking and now the purpose of woman was not solely based on childbirth and raising kids. It was the change towards equality. (Schulman) Which kind of failed at the time because there were still a lot of sexism in design. But hey, at least they tried!

Enovid had pretty packaging with burgundy and pink labels. The brand used modern style of type in their logo and it was pink. The pill itself was also pink so it was clear towards whom it was targeted.

In other areas it was pretty much the same. The demand for ads was bigger than ever but branding and design for those ads stayed true to its roots and cannons. It was very gender specific and there was little room for something unisex and genderless. 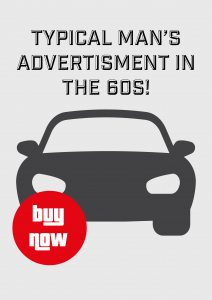 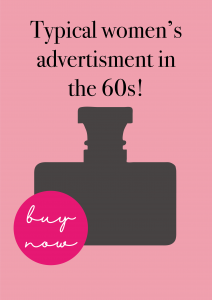 A typical ad for male would contain some strong images with some old style serif, slab serif or something strong and masculine. Female ad was typically using some script type or modern typefaces because it looked elegant and soft. Typical colour scheme would be pink. So as generic and  as stereotypical as it gets.

In my research i stumbled across this page, check it out. Could not use those pictures for obvious reasons but the craft and execution is amazing. A bit sexist but still pretty!