Moholy-Nagy writes in his manifesto of The New Typography (1923) –

“The effective poster must act with immediate impact on all psychological receptacles”.

The fictional 007 British secret agent that many look up to has travelled the world and beyond. In fact on 5 October 1983, an asteroid was named Asteroid 9007 James Bond in honor of Ian Fleming’s iconic character. According to Derek S. Young’s article in Chance magazine, it has been estimated that around 20% of the world’s population has seen at least one James Bond film. This highly acclaimed character has won hearts the world over with his looks, styles and gadgets. Not only have James Bond movies been filmed all around the world but his posters have also appeared in various languages. Posters of the franchise have been printed in French, Polish, German, Hindi, Arabic, Chinese, Japanese and Korean languages to name a few. Some have maintained their graphics, while others have re-created the entire look and feel of the poster. It’s interesting to see how varying cultures have used signifiers differently to lure their local audience. 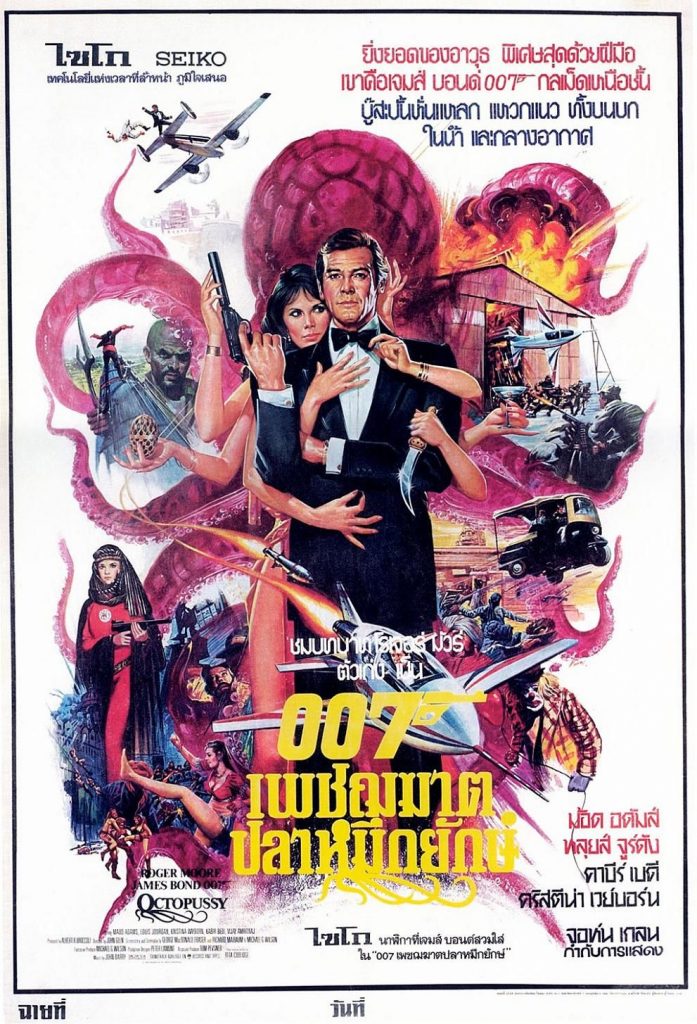 Posters of Octopussy in America, stylized the Cooper Lt BT font for the title and this became the logo that was used on posters, trailers, merchandise and the movie. Images painted on the poster were only that of Roger Moore with his girl on a white background, giving the look of a war-time propoganda poster. The Thai version of the poster however, has a lot more action happening behind the two figures. A bright pink octopus with lots of thrill and action, are portrayed along with descriptive text in Thai. The English title is tucked on the bottom left of the poster but more emphasis is given to the 007 glyph and translated title in the centre of the page. On another poster, adding the image of the Bond girl wearing a saree in the foreground gives the poster a semiotic feel of the culture of India, where the movie was mainly filmed. 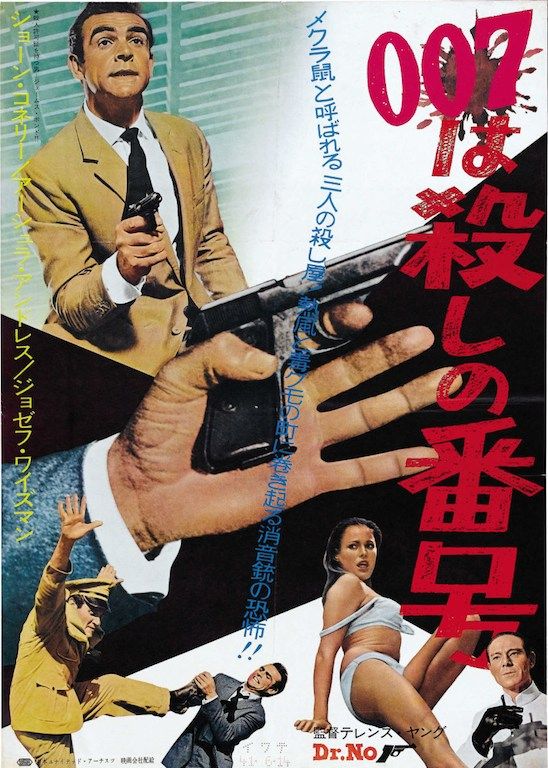 Dr No.’s poster in Japanese reads “007- the number that kills” in red, bold letters narrating how deadly and fearless the action hero is. It also has more descriptive text of the movie running down the middle of the poster. In terms of signifiers, action is prominently shown in their posters with Bond fighting his villains. The Europeans instead preferred to paint a calmer Bond with some of his bikini-clad girls on a bright yellow background denoting confidence, masculinity and charisma. The title uses a ‘no-nonsense’, very legible, Sixta Black font. 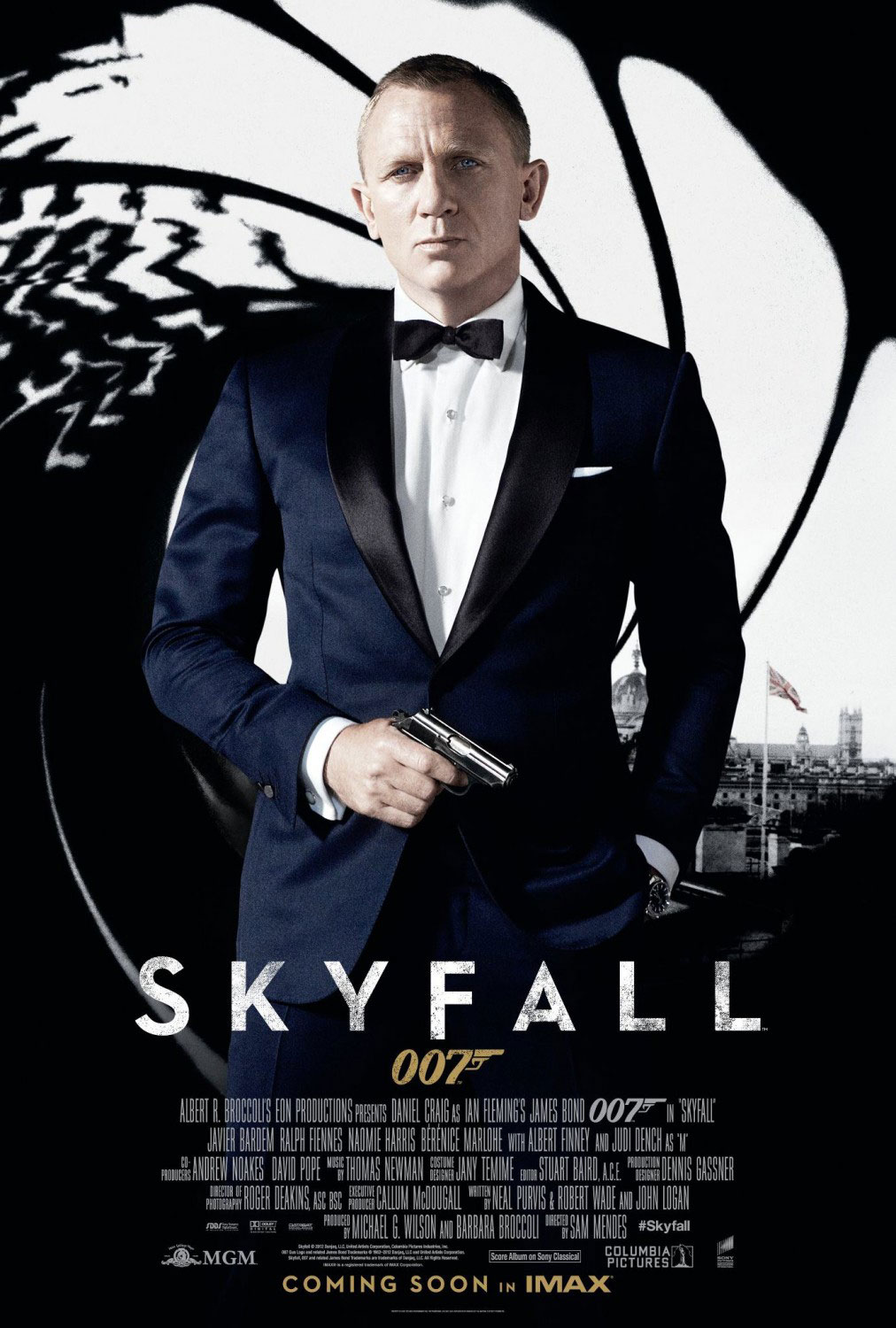 Of all the double-o-seven movies, Skyfall, the 23rd James Bond film did the best worldwide. The poster for this movie was kept pretty clean, showing great contrast with only Daniel Craig in the foreground and the title in uppercase Neutraface in white. Viewing some of the posters from India, Russia and Italy, the posters remain similar in the sense that they only depict Daniel Craig and his weapon as the main image… no girls, no fights, no cars and no explosions. 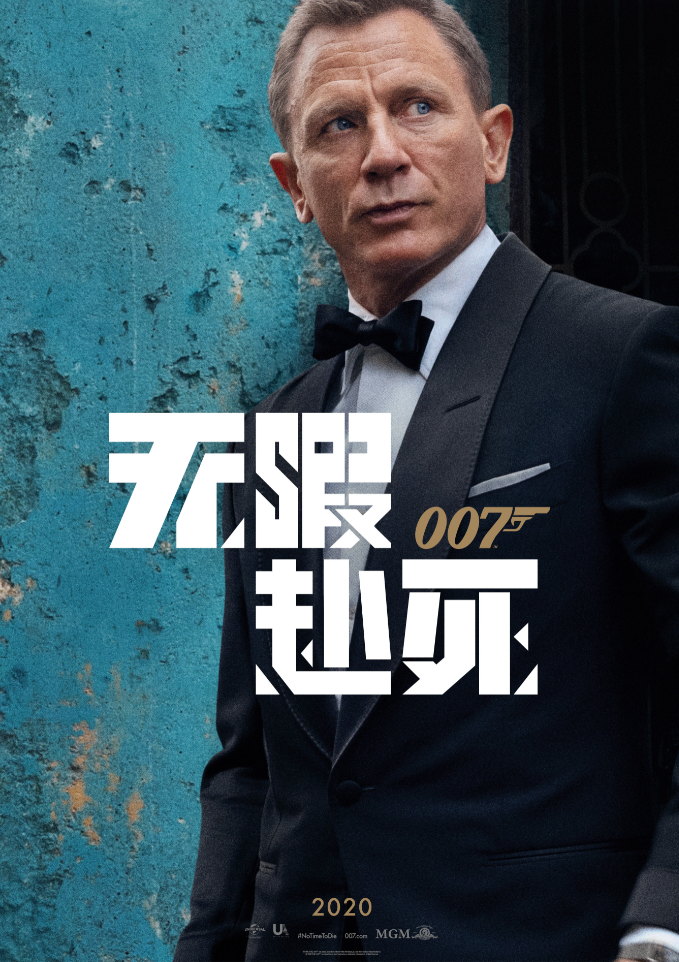 The poster for the latest James Bond movie (No Time To Die) shows the fonts and specifications again being minimalist. The fact that there is a Chinese version of the poster shows that the Chinese audience has taken a keen interest in the movie. In terms of typography, except for the classic 007 glyph, and one figure in the center of the poster in the English version, the Chinese version has roughly different ways of cutting and deforming characters. Instead of having four columns, as in English, it has two columns, because in Chinese, two characters in a group can represent one meaning and saves space for the background. In addition, you can see that the font looks like it is cut on a piece of white paper without leaving any residue. It is very clean and neat, and there are usually many strokes in Chinese characters. The designer redesigned each font in a new flat way and abstracted elements to present. It is interesting to notice that the Chinese version also borrows from the triangle elements of the English poster, replacing the triangle with the corner of some glyphs so as to make it easy and polished. These changes were made in order to better integrate the local audience and to attract them to the movie.

Posters resonate with individuals at different levels of association based on their culture, experiences, values, education, lifestyle, religion, and even attitude. To the Asians who are familiar with Michelle Yeoh, a poster with her image on it may bring about a different feeling as compared to seeing Teri Hatcher on the poster for Tomorrow Never Dies. The iconography of James Bond has reached such a height that no matter who plays the role, the movie will be a success; and the one image that will always denote the thrill of the movie and will always remain constant, no matter which part of the world it is exhibited in, is the number 007!