To fully dissect the typographic and visual aesthetic of the James Bond movie posters, we must understand the semiotics and visual language that is employed. The James bond franchise is notorious for the union of sex and power, specifically in their portrayal of female subjects. When analyzing early posters, Bond is always paired with images of women to reinforce female seductiveness and sex appeal. Most times, Bond is shown at the forefront of the posters with a gun in hand and in a powerful stance. He is always shown in a suit and tie and emulates a sense of panache and calmness despite the chaotic backgrounds behind him. Only up until recent years, with the release of Skyfall (2012) and No Time to Die (2021) have the posters excluded women, however, even Spectre (2015) shows Bond in the forefront with a female character at the back dressed in a long gown. The women are usually placed behind Bond and dressed in seductive clothing. In addition, most posters use symbols of violence and action such as fire, helicopters, battle scenes and more. Therefore, it is clear the that James Bond franchise relies heavily on the conjunction between sex and violence in their visual language which is clearly portrayed in the images and representations they choose to use. Understanding this semiotic relationship can allow us to better understand their choice of typefaces and placement of text. 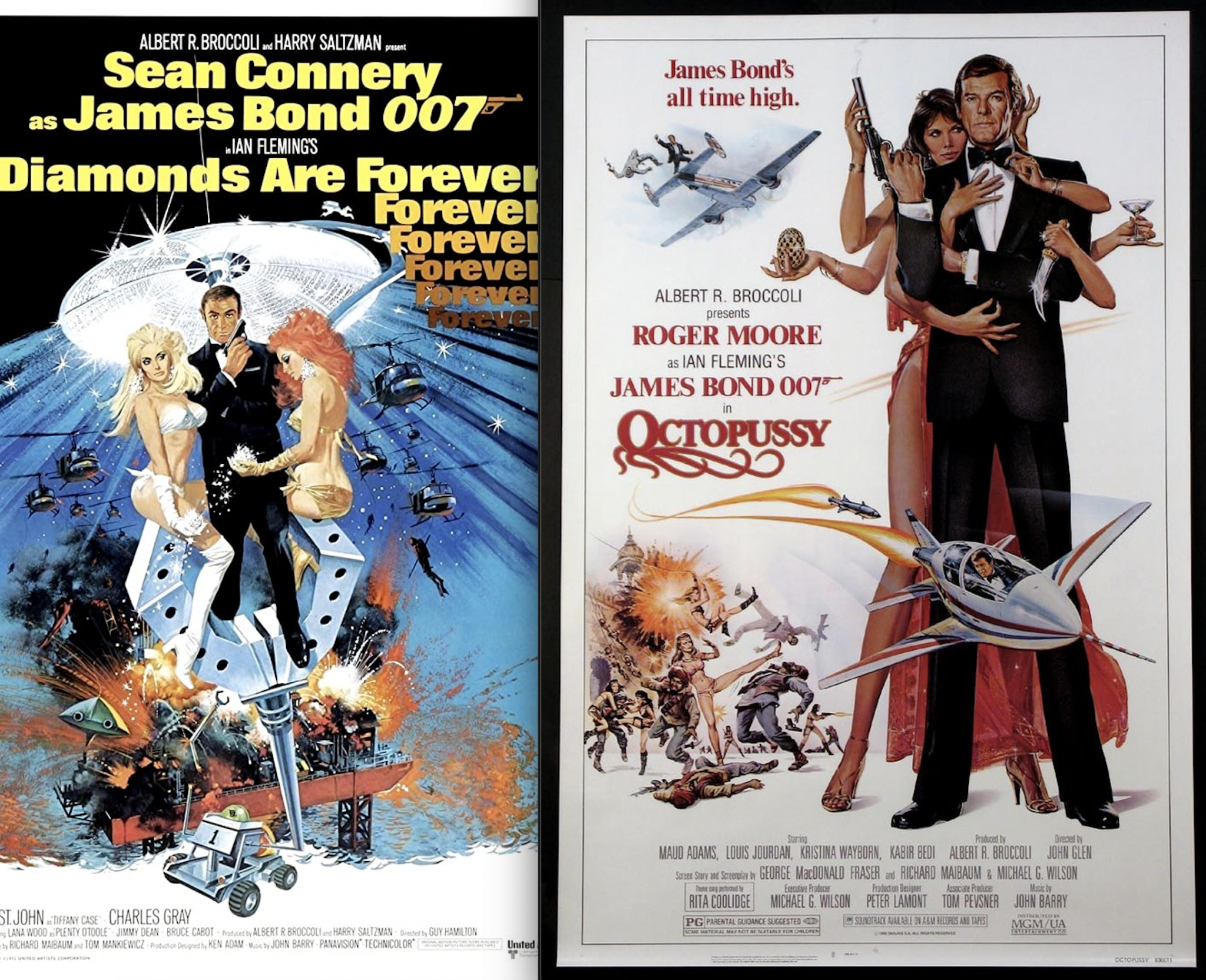 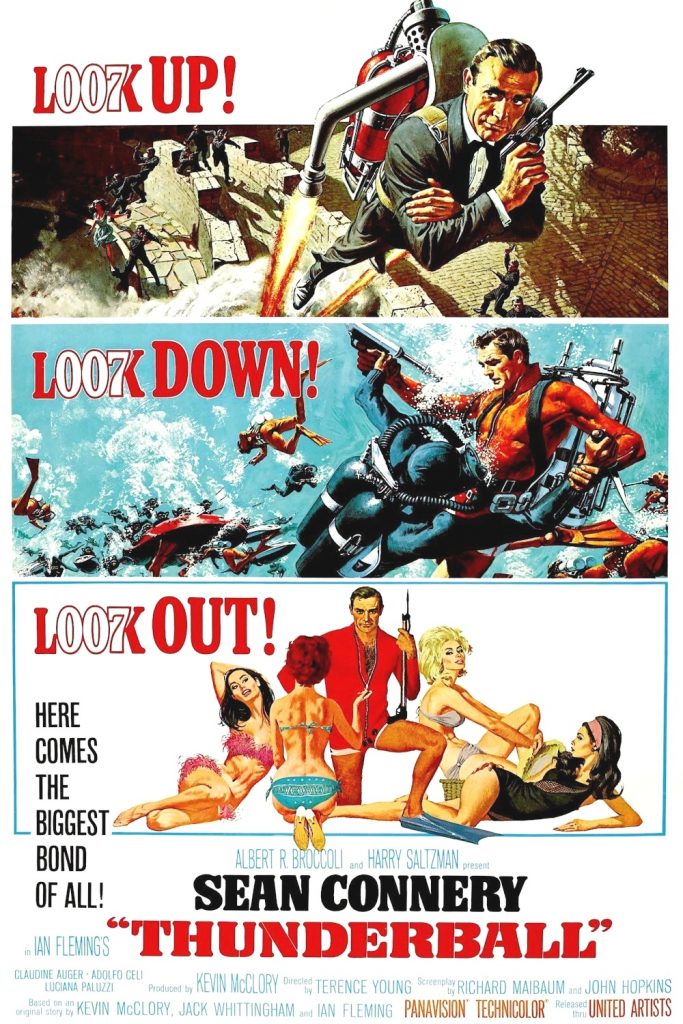 Let’s start by analyzing one of the earliest James Bond movies to date, Thunderball (1965). This poster is divided up into 3 compositions, each packed with vibrant imagery and text. On the top of the poster, we see glyph 7 transformed into Look UP! in a slab serif font. The transformation of the glyph is a common technique used in the franchise, where the barrel of the gun is merged with the number 7. Therefore, glyphs are now being used as a visual symbol and imagery rather than just a number. The use of a slab serif font is an effective choice, considering its thick stroke weight and equally as thick serifs. Its often thought of as a sans serif like serif font, thus working well in poster formats due to it’s legibility. In addition, it pairs well with the bold sans-serif font in the lower-left corner of the poster. At the bottom of the poster, the title Sean Connery and “Thunderball” uses an alternative display serif font that has very thick line strokes, equally as thick serifs and has a line break in the characters. The thick line stroke allows the viewer’s eye to travel down the page. The visual weight of the typeface brings attention to the title after the viewer had time to digest the other headlines at the left of the poster.Next, we’ll move onto Diamonds Are Forever (1971) and Octopussy (1983). While these two posters are 12 years apart, their visual style is still emblematic of one another. We can see the same semiotics in use such as the portrayal of seductive women and Bond in action. In addition, the same aesthetic style of hand-drawn posters in combination with sans serif and serif headlines in the background. These earlier renditions tend to focus more on the visuals portrayed rather than the movie titles and attributes. Versus when we examine newer posters, the movie title is often interlaced within the visual itself. In the first poster, Helvetica Black is used for its ease of legibility. It’s paired with a condensed sans-serif font for the body text. In the second poster, a serif font is used since it pairs well with the title of the movie. We can see here that the glyph of the O has been embellished to connote an octopus. This is a popular technique within the 007 franchise as they will often times manipulate glyphs to visually represent the theme of the movie. 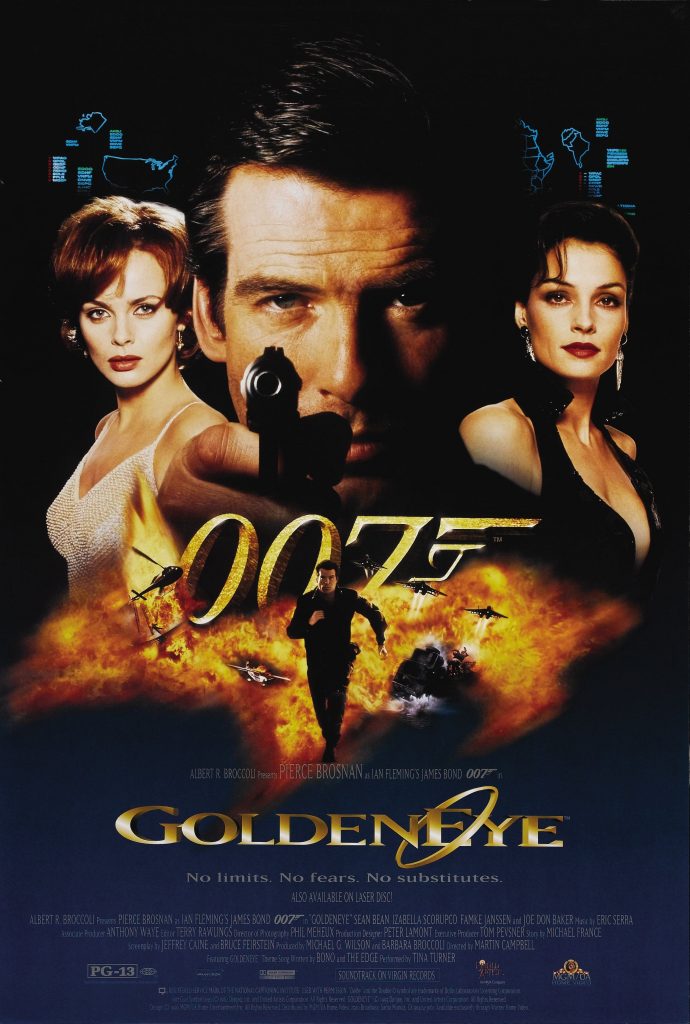 When analyzing GoldenEye (1995), we see an introduction of photographs in place of drawings. The figures depicted on the poster have a phantom-like feel while they are oversized and blur into the background. The 007 glyph plays a similar role in the composition, taking on the grand characteristics as the figures do. Although the 007 glyph is partially hidden, by now it has an iconic status that allows for viewers to identify it without hesitation. This poster includes a gold typeface, seen in the tidal GoldenEye as well as the 007. The letters are rendered to look like gold jewelry, shiny and delicate. This poster does not have the name James Bond on it, since by this time the audience would be apple to imply the name with the numbers 007. The credits blend more into the background than the previous posters analyzed. In comparison to Octopussy (1983), we similarly see a scene of action aside from the central figures. Instead of being drawn out, again there are photographs helping to depict this action on the GoldenEye poster. 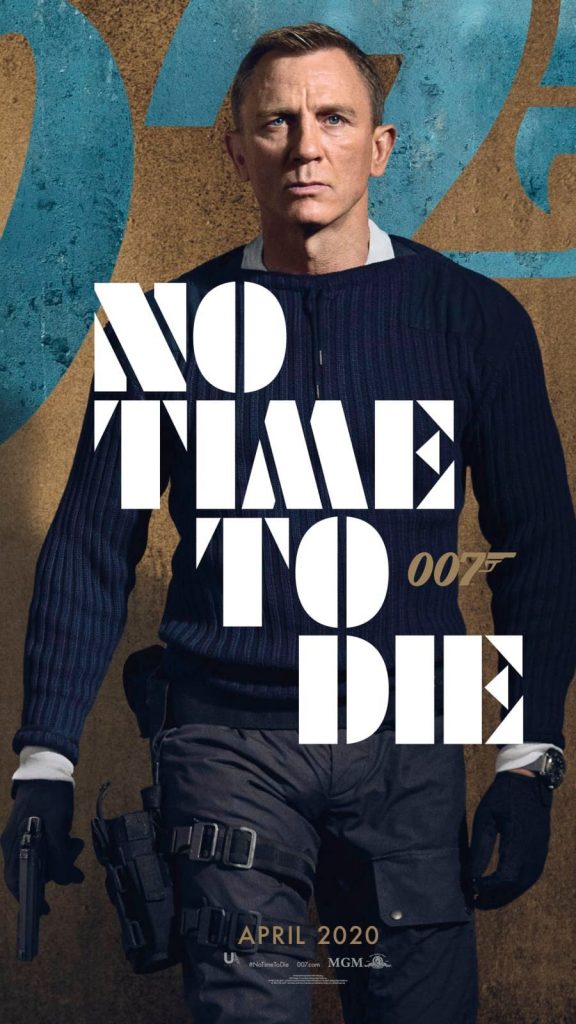 No Time To Die (April 2020) is the least like the other posters and is the most recent movie. The composition and content of the poster is very simple. There is only one figure in the centre of the poster, accompanied by the title and 007 glyphs. The title, No Time To Die was rendered in a very bold style and takes up the majority of the screen. Each letter is oversized, and made up of white, flat, geometrical shapes. The 007 glyphs are shown in small gold print by the title, hinting at the god-like jewelry style in GoldenEye, although flat and simplified. The 007 text shows up again behind the figure, on the cement-like background, blended in like graffiti on the wall. This straightforward poster style allows for people to easily understand the contents of the poster. The poster is able to symbolize more than it shows because of the iconic 007 glyph that has said so much in the past.