“Age of Empires II: Age of Kings” – Grouping and Formations

“Age of empires II” was the sequel to the original “Age of Empires” and in being so, had several improvements.  One of the most prominent by far however was the addition of formations.  In the original game your units all individually had their own path finding A.I., and so when grouped together, they stood around in a big mess, making it difficult to move large groups of units in an organized way, as well as there being little to no strategy in how you move your army. In “Age of Empires II” however it was possible to group your units into 4 different formations, as well as choose their behavior as a single unit (Offense, defense, etc.). Formations are made by either dragging a box around the units you want to select, or by double clicking on a single unit thereby selecting all on-screen units of the same type and clicking the formation of choice on the action menu.

The first of these formations is the Line formation, or the default one.

The units organize themselves into tight rows the length of which are decided through A.I by the number of units within the group. Melee units are placed in front, (such as Infantry with close range weapons and Cavalry) with ranged units behind (such as Archers and musketeers) and siege units in the back (such as Catapults and Rams). The advantage of this formation is the frontal units act as a wall to oncoming attacks, and engage enemy melee units while ranged units can attack them from protection.  The disadvantage is that the close grouping makes the units susceptible to catapult attacks. 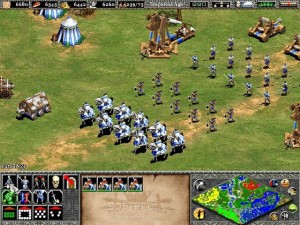 The second choice is the staggered formation.

This formation is very similar to line, except that the units are spaced apart and staggered. This makes it superior to line formation in that less of your units are less at risk to being flattened by a single catapult shot, while your army also covers more ground. The disadvantage is that when attacking, a group has much more strength when close together. 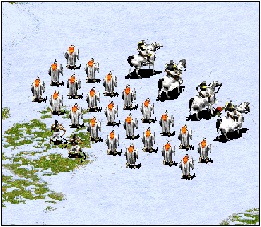 The third formation is the Box Formation.

This is a very specialized formation, as it allows you to protect weaker and/or more important units (such as monks, or battering rams) by having them in center of the box. The organizing of which units go in the center is automatic. While this formation is very effective against melee units, it is still completely exposed to ranged units. 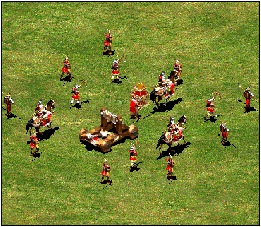 Finally there is the Flank Formation.

This formation differs from the other three, as it is one used only during an attack rather than while traveling. The grouping is essentially the same as line, except that your units are split in the middle to allow them to flank the oncoming enemy. This formation is best used right before contact with the enemy so as to surprise them. it can also be used to quickly dodge a catapult attack. 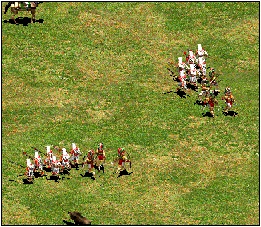 All of these formations, and just the ability of to group units enhanced the game immensely from its predecessor, as organization is one of the key elements of war, and so in “Age of Empires II” greatly helped to raise the realism level for RTS type games.